Bits & Pieces: Mysteries You Should Have Read

Bits & Pieces: Mysteries You Should Have Read

One of my New Year’s resolutions was to be less of a procrastinator and to read more–and more broadly. Mystery is still my favourite genre, however, so in keeping with at least one of those resolves, here are some of my picks for lesbian mysteries you should have read in 2011.

First, read anything and everything by Ellen Hart, J.M. Redmann and Val McDermid. They are the triumvirate of lesbian mystery writing and even when their writing is uneven, which it rarely is, it’s always worth reading. There’s a reason why these three writers have won more Lammys for Best Lesbian Mystery than any other lesbian writers. They are what we look for in writers/books: readable, engrossing, compelling and with strong female characters.

Hart, queen of the lesbian not-quite-cozy delivers solid, believable, trustworthy (well, the good guys) characters and clean, crisp plotting. Her Jane Lawless is a detective we’d all like to have as a friend, while Jane’s friend Cordelia is the prototype of the flamboyant lesbian BFF we are either lucky enough to already have (mine wears a lot of purple and has flame-red hair) or wish we did.

Redmann’s Mickey Knight is the lesbian re-vamp of the sexy male Hammett/Chandler detective we all grew up reading and wishing was female, not male. Redmann’s New Orleans setting is always a central character–you can taste the crawdads, brush the beignet dust off your shirt and wipe the sweat from your brow as you delve deep into whatever Knight has stumbled into, which invariably involves intriguing women and surprising queer twists.

McDermid is dark. Very dark. So dark, sometimes, that you aren’t sure turning the page is in your best interest. McDermid doesn’t do the classic good v. evil, black-and-white detective fiction, which can be unsettling for those who like a clear-cut villain. McDermid likes gray–many shades of gray. But when you get to the end of a McDermid book you aren’t finished. She holds onto you for some time after that last sentence ends and the cover is closed and not all the questions get answered.

Since life is too short to read bad books, you know you will never go wrong with those three writers. But prolific as each one is, they can’t write a new book every month and we all need to take risks, so here are some others worth checking out. 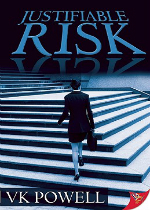 Never judge a book by its cover, but the sexy-yet-creepy cover on VK Powell’s latest novel,  Justifiable Risk, drew me in, as did her mystery. Powell is not the most fluid writer out there, but she plots well and her day job as a 30-years-in police officer who moved up the ladder from beat cop to assistant chief means verisimilitude runs through every aspect of  her story. Justifiable Risk isn’t one of those mysteries where you shake your head and wonder wtf happened here.

Like Delafield, Ellis lost her beloved. And although it’s been two years since she was widowed, she’s not over it. Enter journalist Eva Saldana. She’s come to town to prove that her brother didn’t die of a drug overdose, but was murdered.

But the police are never fond of re-opening closed cases for any number of reasons and so when Greer does so, things get dicey. Dicier still because…well, we don’t want to spoil the plot, do we?

Some parts are predictable, like the sparks flying between Greer and Eva. But Powell tosses just enough red herrings into the plot mix for a nice ceviche.

When an Echo Returns
by Linda Kay Silva
Bella Books 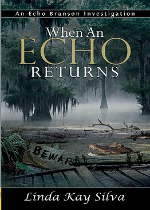 When an Echo Returns

In this installment of Linda Kay Silva’s very popular Echo Branson detective series, the novel opens onto the destruction wrought by Katrina onNew Orleansand environs, notably the bayou where Echo found her roots. Silva gets the topsy-turvy nature of the storm damage right, the anomalies of detritus and the hideous stew of standing flood water, as well as the smell that hangs everywhere. (Although she inexplicably misses the heat, which is what killed still more people post-storm.)

As someone who once lived in New Orleans and who has read several novels by queer New Orleanian writers (notably J.M. Redmann and Greg Herren) whose series detectives deal with the aftermath of the storm (as well as having written about it myself in Day of the Dead and Love, Bourbon Street), I was interested in how Silva would handle Katrina in the context of Echo’s special gifts. Redmann and Herren, both Lambda Award winners for their mystery series set in The City That Time Forgot, addressed both the outright horrors and the quotidian miseries of Katrina and its aftermath with tear-jerking honesty.

Silva takes the reader in a different direction, to the dark side of the damage–what lies beneath when the natural world wreaks vengeance on its denizens. This is a real battle of good and evil tale.

For those unfamiliar with the series, Echo Branson was Jane Doe, toddler, dropped off at an agency at the age of five, then she ended up in a mental ward. She named herself when she fled, after her gift began to reveal itself–she’s an empath. Enter Echo Branson. But being an empath is dangerous stuff and the power can be hurtful to one’s self and others if not restrained. Echo sought out her mentor, Melika, in the Louisiana Bayou where I used to live and which I can attest is a world that hovers between the reality we all are centered in and something Other. It’s not just all that atmospheric Spanish moss and the alligators and the echo on the bayou itself–there’s definitely something else, and that’s what Echo seeks out.

Echo is now a reporter at the San Francisco Chronicle and has come with her best friend, Danica, to report on the catastrophe and what it has wrought. Danica is mixed race and while Katrina assaulted many white people, it was the people of color who fared the worst. Danica is Echo’s entree into black America and Echo is her entree into the world of the empath.

But Katrina has unleashed more than physical fury on the bayou–it has unleashed a supernatural evil that threatens all those who Echo loves, the people who are the only family she has ever known.

Fans of the Echo series will find this novel a compelling page-turner. Silva tries hard to convey the aftermath of Katrina and the visceral nature of catastrophic storms and the pain and suffering that never quite heals because there is always something new you didn’t realize you had lost.

There are some points at which even suspension of disbelief pushes the envelope, but for those who love a paranormal mystery with a foundation in grim reality, When an Echo Returns is a satisfying read.

The second in the Alexis Pope mystery series, Harpies’ Feast also works as a stand-alone, although I recommend reading the first in the series, Ordinary Furies, because the development of Alex into a lesbian amateur detective is not the standard story. 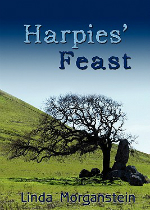 In Morganstein’s previous novel, Alexis Pope was married–to a man. But her husband’s death catapulted her out of her suburban complacency and into a maelstrom of emotions that has her questioning her sexuality and also, naturally, since this is the world of mystery, murder.

Where Alex was led in Ordinary Furies impels the action of Harpies’ Feast, but isn’t integral to the new plot.

Like so many lesbian detectives, amateur and professional, Alex has suffered a major loss, and in Harpies’ Feast she travels to Sonoma to regroup and attempt to heal in California’s lush wine country. Her involvement with a local theatre group, however, leads to her attraction to a lesbian actress turned playwright, Nikki. And since Alex is still adjusting to her evolving sexual orientation, this presents new complications for her.

Another complication for Alex, still fighting her own demons, is her  concern–deep concern–about the young actress, Jaycee, in the play and the brutal group of mean girls bullying her.

While Harpies’ Feast addresses the topic du jour, bullying, which many writers have been dealing with, the novel also takes on California’s elitist hedonist culture–the wine buffs, the foodies, the fluid sexuality that knows no commitment, the free-flowing money. And then there are the women–complicated, complex and, at times, corrupt. Morganstein layers all of this together with mounting creepiness and impending dread, leading to a surprising twist of an ending, which also leaves the door open for another novel in the series.

One niggling complaint for this reviewer, however, was the prologue. Fiction and journalism are not written in the same style. Stories allegedly taken from newspapers–especially when they cite an actual newspaper, in this case the San Francisco Chronicle–need to be written in newspaper style and be believable newspaper stories. A prologue is the first thing the reader sees. Thus a totally inaccurate representation of “fact” can turn readers away–something all fiction writers, and their editors, should keep in mind.

What Happened in Malinmore
by Kate Sweeney
Intaglio Publications 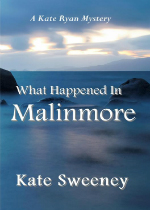 Kate Sweeney does a good cozy–enjoyable, tidy mysteries with a smattering of humor. (Plus it’s nice to have a lesbian detective whose partner, Dr, Maggie Winfield, is still alive and ready to romp.) In the fifth detective Kate Ryan mystery, Kate ends up inIreland, first as a suspect, then as another detective on a complicated case.

Maureen Costello is mourning the death–which she believes was murder–of her lover, Dr. Rose Clancy. The novel opens with her kissing Rose’s headstone, which is heart-breaking, and then vowing to find her lover’s killer–Kate Ryan.

Costello’s heartbreak leads her to track down Kate and threaten her at gunpoint. But Kate has never heard of the dead doctor, even though she was found dead at the bottom of a flight of stairs clutching a piece of paper with Kate’s name on it.

So off to Ireland everyone goes: Kate and Costello, Maggie and her aunt, Hannah Winfield (who is quite the character and Kate’s new assistant since Maggie does have to go back to work). The police are adamant that Rose Clancy’s death was accidental, but Costello is just as clear that it was murder. Exploring the circumstances of Rose’s death leads, inevitably, to more death, plus a mysterious amnesiac (is there any other kind?) and…well, we don’t want to give away too much.

At book’s end, Sweeney lets the reader discover What Happened in Malinmore and whodunit, but she also reveals that there will definitely be more to come, which will please her fans no end.