Musician Brontez Purnell, performer Max Steele, curator Joseph Whitt, and high school English teacher Kat Case gave readings on November 9 in the main gallery space of P.P.O.W. in Chelsea, New York. The evening was themed queer punk, and the event was named “Bullies”–but the artists just presented themselves and their unfiltered  stories – not fearlessly or unapologetically, not seeking approval of the LGBT powers that be, but just as it is, come what may, tarted up in nothing but the moment. Says Whitt: “The whole night was an exercise in sidestepping expectation, even down to the title. I love the fact that we called the event ‘Bullies,’ and no one waxed melancholic about victimhood. For me, it gets better if you set aside the platitudes of the fucked-up American mediascape and cultivate a voice that you can call your own.” Whitt read an incantation – imagine a “Howl” stream of consciousness rollercoaster tour of gay Brooklyn, half exorcism and half sci-fi reverie.

Reflecting on the reading, Case added:

What I loved about the reading was that each of us chose subjects that are easy to fetishize or oversimplify and rarely analyzed with the complexity they deserve. Brontez and Max wrote about queer sex with multiple partners, I wrote about female desire and how sex can be at once empowering and self-destructive, and Joseph reinvented religious verse. But all of us did this not to shock our readers, but to challenge them to rethink their ideas on subjects that are often not addressed with adequate critical thinking, honesty, or humor.

Case read a short story of an intense and emotionally severe woman who is trying her hardest to be “a casual person.” By the story’s end, the woman is riding on a date’s bike handlebars, off to an abandoned warehouse for an emotional tryst that is anything but “causal.” 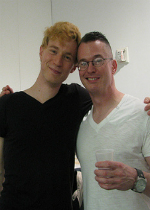 Purnell, Steele, and Whitt previously had read together last fall at P.P.O.W., and wanted to reconvene one more time for the last show put together by Jamie Sterns, the gallery’s curator. “I’m really excited to do this type of reading, and very lucky and honored to have been able to work with Jamie, who has been organizing these types of events through P.P.O.W. for several years,” Steele said. “It’s really important to me to be able to present diverse forms of queer and alternative writing in a public and free format. I’m really interested in making culture available to everyone, and it helps to have such a supportive gallery to do this through. I was thrilled to be able to present work alongside Kat, Joseph, and Brontez, especially. I feel like punk culture informs all of our writing practices, and this common through-line of ownership, redefinition of logic and repurposing of language was a sort of lovely coincidence.” Steele’s piece illuminated a tale of “anything vs. everything,” the intimacy of human touch vs. what solipsistically keeps us blocked off in our own personal cages and a hookup striving for human connection amid a character named Paul with “a bourgeois cock” who can only ejaculate into a blue blanket. 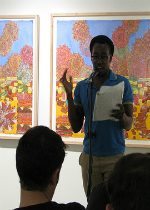 Like a raw showman, Purnell read fast and furious, just notes he had scribbled down on pages he tossed to the floor when he was done. In his opener, he talked about dressing like a dapper lesbian but transforming into a slutty lady (offering an apology to his feminist writing teacher) when meeting Armani, a man he met on the subway, who magically “fucked him into a woman.” In the closer, he riffed on Castro debutantes with beards, and how he dresses like a nerd, misconstrued his true self– he actually could be falling apart and wanting to kill, urban camouflage, but don’t call him Urkel. In his final story, he talked about a STD counselor’s lack of sympathy for sluts, throwing in the punchline about the results of his HIV+ status, “I just wanted to be liked.” He kept going, finally crescendoing with a talk with the thick Polish dude who had infected him, their HIV+ talk the most intimacy they shared. The aria ended, with a humorous and real declaration to win against life, “I want to be an old man.” Added Purnell: “I felt lucky to be in the church one more time! Any excuse to get a little drunk and process out loud, and on loudspeaker, with the family about all the triumphs and pitfalls of our queer existence is the type of thing I bother going on for. It makes me bulletproof.”

All Photos by Jamie Sterns

Virgins No More: Writers on their First Book Signing
Ancient Gay History, a Guide to Gender and Sexuality, and other LGBT News
Edmund White and James Franco in Conversation, Chelsea Manning Hits the Town, and Other LGBT News