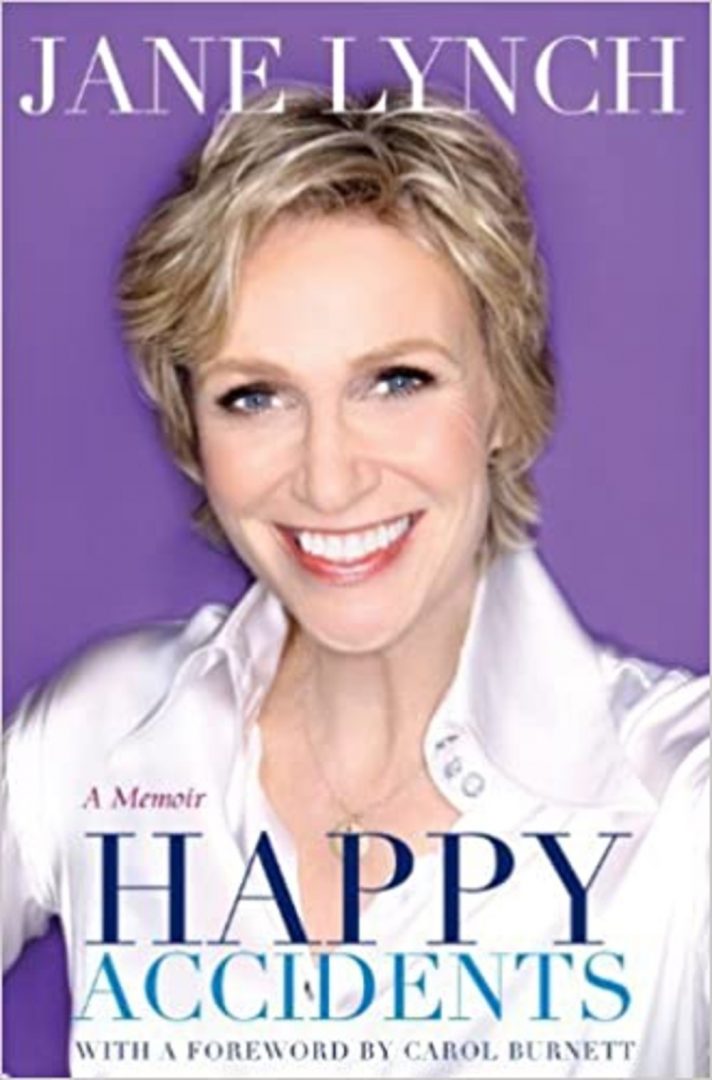 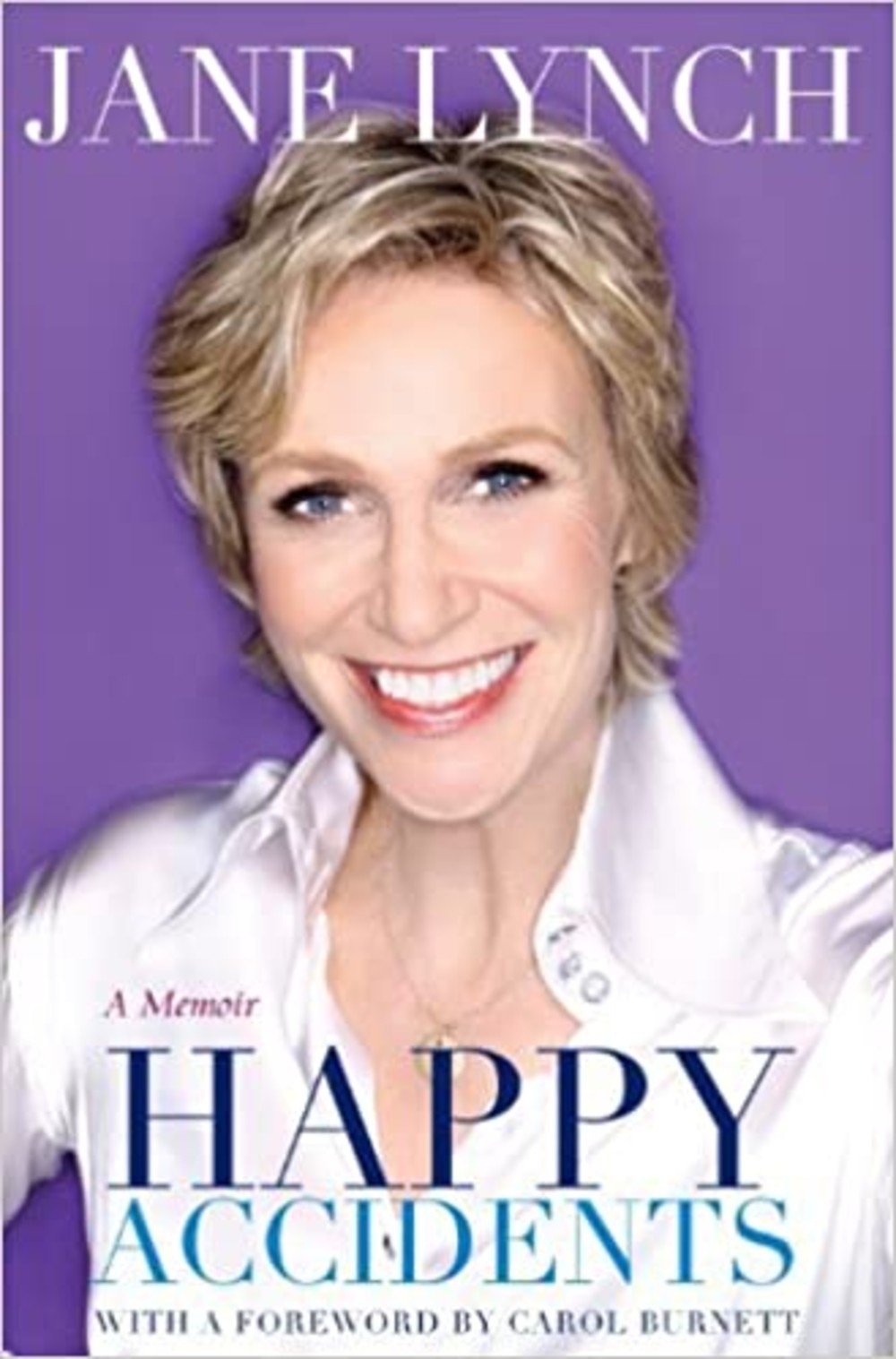 Happy Accidents (Voice), Jane Lynch’s breezy memoir about her life and work as a post-Stonewall American actor, has something for everyone. It is an interesting mix of Americana as well as a cross-section of the history of stage and TV sketch comedy. Both narrative and nostalgia, Happy Accidents is fun with flair, a chronicle of happenstance and the absurdities of life as she gleefully connects the dots between her personal and professional life. Lynch explains humor, and her always present desire for laughter as the driver of her career, as the ultimate engagement with language and emotion, “the words and feelings [that] have almost popped out of my person,” she writes, “as I kept myself open to the influence of the people around me.” This is the confluence of her instincts and talent, continually capable of keeping her curiosity and ambition in flux. This becomes one of the salient connections Lynch maintains throughout her story: Happy Accidents is not so much about Jane Lynch the star as it is about the magical possibilities of determination, and the hard work—both practical and emotional—which is essential to self-fulfillment and success. Lynch’s memoir accomplishes this with aplomb and I hope Happy Accidents will be on the required reading lists of theatre arts courses.

A manifest of self-deprecating humor, Happy Accidents, much like one of her favorite TV shows, Happy Days, has the kind of optimism often missing from celebrity memoirs. It is a welcome relief from the steady stream of memoirs, which for better or worse, are thought of as interesting or important enough to write (or have someone write). To her credit, Lynch avoids the trap of self-centeredness, and over and over again, she underscores what is of value to her—not the anguish or even the pleasure of being an actor, but the “the great, unexpected gifts of learning how to act” (emphasis mine). Serial horrors are not necessary but authenticity is. As Johnny Depp says: “With any part you play, there is a certain amount of yourself in it. There has to be, otherwise it’s just not acting. It’s lying.”

Miserable childhoods make for great art (Beethoven and Dostoyevsky come to mind), and sordid tragedy is a page-turner. To suffer is to live and to create is to neutralize the abominable behaviors we engage in. But aside from Fatty Arbuckle or Mike Tyson, for example, many celebrities extol the privilege of getting away with drugs and other lawlessness that would find an unknown plebian doing serious jail time. Recent memoirs such as Running with Scissors (Augusten Burroughs), or even The Glass Castle (Jeanette Walls), attest to the profitable phenomenon of miserable childhoods and even more miserable adulthoods, but in Happy Accidents, it seems that Jane Lynch has no motivation or need to hide behind such privileged misery. In fact, the absence of this brand of hubris is one of the pleasures of the book.

Early on in her story, Lynch tells us: “I don’t know why, but I was born with an extra helping of angst. I would love to be able to blame this on my parents, as I’m told this is good for book sales. But I can’t.” Lynch also points out that her Midwest family was “like the subject of a Norman Rockwell painting, except it was the 1960s and ‘70s, so he would have had to paint us with bell-bottoms and a stocked liquor cabinet.” She continues: “I didn’t settle into myself as a child, but the family I had around me was entertaining and embraced the life we had.”

Jane Lynch has issues with alcohol. She doesn’t blame anyone for her drinking and does not point a finger at family or friends, bad bosses or career decisions for the consequences of her drinking. Rather she admits, with self-respect and confidence, to a sense of herself, not as the center of the universe, but as a player on the stage of life. Her admission of a relationship with alcohol is where trouble began and ended for Lynch, and she blessedly antes up:

I had started drinking in my freshman year of high school. At first, it was just a little Boone’s Farm or a beer here and there, but by my junior year, I was drinking every night…. There was no drinking behind my parents’ backs, though: it was all in the open. It was a drinking culture all around in this neck of the woods in the late 1970s. Our house was the place to go for singing and drinking. We’d sit around the kitchen table, and Mom and Dad would tell stories and sing songs from their youth. My favorite was their two-part harmony rendition of “Coney Island,” a peppy 1920s tune…. My parents were creatures of their era—they loved to drink and throw parties. As soon as I was old enough to think of it, I’d sneak downstairs after everyone had gone and take sips out of the leftover drinks. I also liked relighting the cigarette butts that people left behind, so I could practice smoking. Once, when my dad caught me lighting up outside (I was about twelve, and I had literally picked up a butt out of the gutter in front of our house), I overheard him proudly telling Mom in the kitchen, “She’s out there smokin’ like a pro!”

I don’t mean to inflate Lynch’s strength of character simply because she has character, and I certainly can’t take alcoholism out of her career trajectory because, well, she drank like a drunk, indulged in self-pity, projected poor self-esteem on colleagues, and struggled with the mystery of where that vomit patch in the bathroom came from. Her alcoholism is what it is and her drinking was what it was.

My reservations about the book stem from the thoughts (oh, cynic that I am) that Jane Lynch is too good to be true and that her happiness won’t last forever. Perhaps not, but I suspect that when one turns the last page of Happy Accidents, one hopes that it does!