The Banal and the Profane: Donna Minkowitz

The Banal and the Profane: Donna Minkowitz

“Think about emailing my agent. Literary publisher said it was having a meeting to decide about my book two months ago, um, did they ever decide? Probably decided not to. Email her. She says ‘they claim to still be seriously considering.’ Dejected, frustrated, slivered-almond-sized sliver of hope…”

This month’s  “Banal and Profane” column comes to us from Brooklyn based writer Donna Minkowitz.  Donna Minkowitz won a Lambda Literary Award for her memoir Ferocious Romance: What My Encounters with the Right Taught Me about Sex, God and Fury. A former feature writer and columnist for the Village Voice, she has also written for The New York Times Book Review, Salon, The Advocate and The Nation. Minkowitz recently completed a second memoir, The Marvelous Toy, which combines approximately 87% true memoir with stark raving fantasy. She blogs at donnaminkowitz.wordpress.com

Make coffee and cereal with blueberries, dates and almonds. A gift to myself. Stimulates the writing. Karen gets up and we jockey for control of the “airwaves”: the right to fill the house with sound. I can only write using voice dictation software because of a long-term arm injury, so if I write or use the computer for diddlysquat, Karen can hear everything I’m writing or doing. (“Move down three paragraphs. Start email. Blubbering in the soft humid air. Think about Divine Pussy.”)

I’ve gotten accustomed to writing with an audience — Karen is the most trustworthy audience I could possibly want. She comments on exactly nothing. And if I need special privacy for a section, she doesn’t mind going in the bedroom (the only other room in the apartment, basically). But here we both are, eager to greet the day, and does she get to play music or do business and social emails in quiet, or do I get to write or see what Carol Guess has posted on Facebook?

We take turns, like we always do. Thank God I don’t think the Writer in the House Always Comes First.

Stretch and get ready to go out to swim. Even just sitting at the computer (and only writing by dictating) hurts the injury, too, so every day I intersperse 15-minute blips of computer time with leaving the apartment as often as I can so I will walk and not sit. (I go to the Y, acupuncture, doctors, anything that will get me out of the apartment and also help me get better.) I’ve learned to write in tiny little bursts — like a Buddhist monk’s spoonfuls of porridge, one delicious essential one every three hours. I’ve had this injury 11 years.

Subway back from swimming in Park Slope. Leave at four by another subway for therapy and Writing Group.

Everybody hates my story about loving, tender military robots.

Off to swimming. Take scraps of my writing to edit longhand on the R train. I’m able to write with a pen, but only a sentence or two at a time without pain and the very scary threat of making my condition worse. Love writing on the subway, though! Love the scraps of paper I take out of my bag. Reminds me of writing when I was 15, same purple ink splots on my hands and thighs.

I adore the Y, am delighted as I talk to all the ladies in the locker room, mostly straight old ladies. They come to the Y every day to exercise and socialize with other women. All of us get to experience here the marvelous joy of what Marge Piercy called “daily female friendship like bread,” talking about moisturizer, skirts, travel, relatives, and restaurants as we slather cream on and groom ourselves. It’s like being in a harem at the Y, but a good harem, no man in charge, all the women with floppy, tiny, bouncy, long-breasted, enormous, even gnarly bodies beautiful.

More editing on train back. Super-quick lunch at home. Dash out for Pilates, an hour away in Manhattan, more editing on train. Pilates has been helping my injury so much that it seems that every week I can lift heavier things (heavier like, say, a coffee mug) and even write more. For this reason and others, it seems holy to me. Yes, actually holy. Make fun of me, I don’t care, I will just do bridges on the mat and tune you out. My teacher is a short gay man, not obviously muscle-bound, but stronger than iron.

Back to Brooklyn. Think about emailing my agent. Literary publisher said it was having a meeting to decide about my book two months ago, um, did they ever decide? Probably decided not to. Email her. She says “they claim to still be seriously considering.” Dejected, frustrated, slivered-almond-sized sliver of hope.

Karen and I do weekly food shopping at Park Slope Food Co-op. Man says, “Did your book I read the review of ever come out in paperback?” No. Gorgeous, surreal purple cauliflower, and candy-striped radishes that look like food for elves. I want some. We run into five of my former writing students. Swim while Karen goes home in a car service with the groceries. (I can’t help carry the bags up, anyway.)

Back in the apartment: Karen kisses me juicily and subtly at the same time, a combination difficult to achieve. It’s like having peaches in my mouth whenever I want them.

Write. Write. Walk around the block so I won’t be sitting and writing. 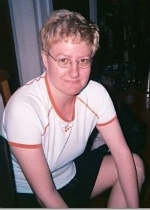 Alarmed when I realize that for months I’ve been reading mostly tech blogs and publishing journals to figure out about book apps, e-publishing, new “social reader communities.” I have not been reading novels, poems, sci-fi, so my writing has no nutrients to grow in. Garbage in, garbage out.

Write until my arms hurt. It’s good stuff, I think, actually, but I make myself stop.

“I was listening to music while I exercise.”

I restrain my urge to write. Stopping my brain from going into idiot fantasies about what some macho famous writer would say if told he had to postpone writing for someone else’s sake.

When her favorite song’s over I say, “Can I just write for a little bit?” She says yes because she’s sweet and because she knows how much I want to. Facebook. Read Mediabistro’s daily news digest so I can divine what the fuck writers are supposed to do at a time that I think must be the nuclear winter of publishing. Think about writing a piece on the evil side of New York firefighters (the racist, sexist, placing-human-turds-in-people’s-lockers side).

Shit. I’m supposed to be rushing to get corrections entered in an essay before I have to leave for lunch with my friend P., a writer, to brainstorm desperate publishing strategies. Over hummus, P. reveals that her publisher, who I had been thinking of approaching for the magic-realist memoir I’ve been trying to sell, actually writes to all its authors and says “We’ll publish you a whole lot faster if you just donate some money to us.” Hmm, decide not to send MS to them.

Make dinner for me and Karen. After writing and strategizing all day, so good to work with materials that are physical, touchable, smellable. Stuff I can actually watch myself turning into something delicious from weird raw little bits no one could eat. Make ground turkey with wild rice, snow peas, sautéed radishes, onions and mushrooms.

Oh my God, one of my favorite living novelists just sent me a friend request. That must mean some people must still think my work is great, right?

Leave for medical massage at the hospital. Christine gets inside me — my muscles — opening me up through the hands, palms, fingers, and armpits, then the back and chest and all over. Massage always feels somewhat sexual to me — muscles opening and opening, tendons painfully/pleasurably being stretched, making me feel like a giant sea anemone — but this time it also feels emotional, too, waves of sadness and tenderness passing over me.

Yay! Our day to “frolic.” We do this every Saturday barring deadlines (academic papers for Karen) and storms. Especially in the summer, our way of having “staycation.” Today is Queens day. Take the 7 train out to Corona to try Tortilleria Nixtamal, the only joint in the city that makes tortillas out of fresh corn “fermented” in limestone, the real way. Incredible tasting — shrimp con crema tacos the most vibrant I’ve ever had.

Then hop another train to the Noguchi Museum in Long Island City, Queens, devoted to the work of a single sculptor and designer, Isamu Noguchi. We love his work. I never heard of him before. Half Japanese, half white-American who grew up despised and illegitimate in early-20th-century Los Angeles, Tokyo, Yokohama, and Indiana. Lyrical, sexy sculptures. Poignant… A guard chases me away from a sculpture in the garden that has a big, echoing hole I am trying to stick my head into and make music with.

Ethical Culture. So glad it is meeting today — the only time in the whole summer. My non-God church, as it were — we practice progressive politics, respect for all humans, occasional pagan flourishes (I want more of those). I’m ambivalent about the out-of-town speaker — he’s telling us to be more present at every moment in our lives, and then not listening to anything we say. So happy to see everyone though, after a month’s hiatus. The hugging, our questions, and saying hi the best part.

Have fun strolling around Park Slope by myself after. A new grass-fed burger restaurant has opened! Look at gorgeous flowers, vases and ceramic birds in the flower shop.

Home to Sunset Park. Dance with Karen to swing music. Beautiful, boppy and sacred. Fade out.