Queer Rites: God vs. Gay? The Religious Case for Equality

Queer Rites: God vs. Gay? The Religious Case for Equality

Like most people, I weathered the media panic surrounding the coming of Hurricane Irene. Although the rational part of me remained calm, the media frenzy seemed to want people to overreact.
The loud chorus of doom had taken over every other item in the news.
“Hurricane of the century,” “Hurricane of Hurricanes,” people were saying. Like a contagious fever, the panic element grew until some members of the broadcast media advised people to stock up on bottled water because Philadelphia’s water supply would probably become contaminated.
The ‘Eve of Destruction’ scenario came mostly from TV’s talking heads that for two or three days at least devoted entire newscasts to news of murderous Irene on “her” Bloody Path of Destruction. Feelings of panic, like lone notes in a piece of classical music that eventually swell into a Wagnerian overture, grew until people began to do unusual things like chop down large trees on their lawns before the storm had a chance to knock them over.
The talking heads had done their job: many were convinced that Armageddon was at hand.
In the wake of the impending disaster, I did what any book lover would do: I turned the TV off and reached for a book.
In this case I selected, “God vs. Gay, the Religious Case for Equality,” by Jay Michaelson.
Michaelson, the author of three books and the founder of Nehirim, a community programming resource for LGBT Jews and their friends, has written an explicitly honest book about his journey to self acceptance.
“For many years, I lived as an Orthodox Jew,” Michaelson writes, “strictly observing the minutiae of Jewish law. But I have also wandered far from my roots. I have spent many weeks on silent meditation retreats in Buddhist traditions—traditions in which I now teach as well.”
When reading this statement my mind raced back to what the Dalai Lama is on record as saying about homosexuality. Liberal, mostly secular American Buddhist adherents aside, this is what His Holiness is on record as saying: “A Western friend asked me what harm could there be between consenting adults having oral sex, if they enjoyed it.  But the purpose of sex is reproduction, according to Buddhism. The other holes don’t create life. I don’t mind – but I can’t condone this way of life.”
(Minus the reference to holes, this could also be a statement by another His Holiness, Benedict XVI of Rome).
Michaelson is no slouch when it comes to knowing both the Old and New Testaments.  He writes that he’s studied the New Testament “as someone deeply involved with ecumenical and interfaith dialogue.”
In fact, there doesn’t seem to be much that he hasn’t studied, whether it’s Islamic, Hindu, or what he calls “nonaligned.” He considers himself fortunate to have journeyed so far and wide.The reason for his submergence into reading and scholarship was to ease his pain as a gay man.
“I contemplated suicide virtually every day of my life for almost ten years. And I tried everything. Abstinence, negative reinforcement, fantasizing about women. I was even in a loving relationship with a woman for over a year, trying all the while to be straight.”
In a sense, Micahelson’s story sounds like every other coming out epic, but the difference here is that the author wanted to know whether coming out was spiritually the right thing to do. It’s one thing to follow secular self-help psychology about being who you are, the ‘I’m OK, You’re OK’ school of life which tends to paint everything with a broad brush. Michaelson wanted to be 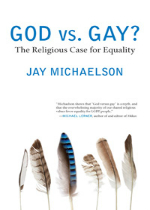 certain he was ‘okay’ if only because he was tired of asking himself why God had made him that way. “How could I be so evil?” he asks, “I couldn’t make sense of it.”
But even after a lengthy period of questioning, researching and finding a life partner, the thorn is still in his side. He admits that, “I don’t want to be gay. I’ve had homophobia ingrained in me, and all things being equal, I’d rather be straight. I envy my straight friends, who can get married and have families that are not scrutinized and delegitimized.”
But are gays and lesbians getting married today being scrutinized and delegitimized? Perhaps they are in rural cities and states, but in New York City? Even if both of the answers to this question are yes, the societal trend is away from these impediments.
God vs. Gay got me thinking about the many forms of ingrained homophobia.
Consider the closet case who mouths homophobic slurs, or closeted politicians who do not support gay rights. Internalized homophobia, however, can also effect the seemingly out and proud. These are gay people who for one reason or another are unnecessarily hard on one another. You used to see this on a wide scale within activist organizations or lgbt communities where various leaders with large egos would clash with other leaders or peers. It’s one thing to have a falling out or a disagreement that stays within the bounds of ‘agreeing to disagree,’ quite another when it evolves into a paralyzing decades-long immobilization.
As a Philadelphia artist friend of mine commented recently when his mostly-gay art exhibit received good reviews from the city’s straight reviewers but was panned by the only gay reviewer: “I got a really snarky review from a fellow homo!”
“What is it with homos hating other homos?” he asked.
At a loss for words, I couldn’t help but question whether a smattering of internalized homophobia, posing as intelligent criticism, wasn’t at work here.
Although God vs. Gay risks boring the reader with the all too predictable re-examination of biblical verses that seem to condemn same sex love, Micahelson has more interesting things to say about this than the average commentators of this litany.
Of special note is his focus on Jesus’ attitude towards eunuchs, “who were also very queer in their societal context.”  Eunuchs from birth, or the spiritually castrated as referenced in Matthew 19, seem to jive with Clement of Alexandria’s contention that “some men, from their birth, have a natural sense of repulsion from a woman, and those who are naturally so committed do well not to marry.”
Michaelson asks: Is Matthew 19 referring to such men?
Some of Michaelson’s other conclusions: That Leviticus 18:22 is a prohibition on male anal sex in the context of idolatry.
That for the early Church fathers, including St. Paul, the problem was sexuality, not homosexuality.
That the Old Testament’s prohibitions on male anal sex are linked to prohibitions on idolatry. “They are about ritual purity, not ethical law,” he says.
That St. Augustine, who had love affairs with both men and women, later advocated “having natural sex with a prostitute rather than ‘unnatural’ sex with oneself or another man.”
That St. Thomas Aquinas believed that homosexual behavior “is no worse than masturbation—or, for that matter, lending money at interest, which was also called ‘unnatural.’”
Michaelson’s respectful treatment of traditions not his own, and his avoidance of journalistic attacks on easy contemporary targets like the Catholic Church, gives his voice added weight. He writes with a graceful conviction, without the tinge of prejudice or a harsh axe to grind.
“Accepting religious diversity is good for religious communities because it is precisely the flexibility of religious values that enables them to survive and adapt,” he writes. “The history of religion is marked by exactly this sort of progress—right from the beginning….The law, which God had set down only a few chapters earlier, changes when suppressed voices are heard and a cogent claim for justice is staked. This is how religion is meant to operate.”

'Happy Accidents' by Jane Lynch
'Elizabeth Taylor: A Passion for Life' by Joseph Papa
'Looking After Joey' by David Pratt