Chocolate Waters’s three earlier books of poetry, To the man reporter from the Denver Post, Take Me Like a Photograph, and Charting New Waters, were published between 1975 and 1980. They all reflect the energy and imagination of the lesbian-feminist print movement during the 1970s and 1980s. During those years, Waters was a member of the Big Mama Rag collective, which produced the feminist newspaper in Denver, CO. Although Waters is a central figure of the lesbian-feminist print movement, the genealogy of her work is slightly different than the genealogies of lesbian poetry I usually trace—Dickinson, Rukeyser, Rich. The Beats and feminist performance artists like Carolee Schneeman and Marina Abramović influence Waters’s work. Her newest chapbook, the woman who wouldn’t shake hands, is inspired by Diane Wakoski. In the introduction, Waters riffs on Wakoski’s failed affair with a man to lament her own failure with a woman—only she didn’t even get a handshake.

The thirty-one poems in the woman who wouldn’t shake hands (Poets Wear Prada) are short. At times pithy, at times wise, Waters is always a performer. The poems of this collection are carefully-timed with tricky meters and hidden surprises that emerge when you read them aloud. Some of the poems are bon mots in the tradition of Dorothy Parker, if she were speaking openly about lesbianism. Other poems echo Gertrude Stein’s play with language, though Waters, unlike Stein, is concerned with concision.

The evidence of feminism permeates this collection. Waters reworks stereotypes about women of as “shrinking violets” and “silent as lambs” to good effect. I delighted in her poems that explore aging. Waters writes about her own aging body with a variety of humorous devices, wry, ironic, sardonic; all of these poems are sharply observed.

Throughout the collection, Waters excavates narcissism, her own and that of the love object. These explorations are discomforting and painful but always humorous. At times, I wanted avert my eyes from Waters’s anger and indignation about the unrealized love, the unconsummated desire, but her playfulness, both in recounting desire and in working with language, kept me returning. Most of all, I didn’t want to be the woman who didn’t respond. Waters writes in the penultimate poem of the collection titled “p.s.”: “what I really mean to say is/what an ass you are.” Ouch. Then, in a nearly exact mirror of the penultimate poem, Waters turns the pronouns on herself in the final poem, titled “p.p.s.” She acknowledges:

what an ass I am

Harsh, yes, but the parallelism of the final two poems demonstrates the power of the poet and of poetry to turn the coin of experience and examine it from both sides.

If Chocolate Waters mines the comical aspects of relationships never quite 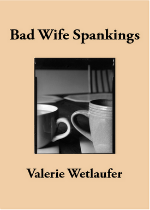 realized, Valerie Wetlaufer mines the lyrical. The twenty poems in Wetlaufer’s Bad Wife Spankings (Gertrude Press) explore intimacy, heartbreak and relationships, themes shared with Waters, but Wetlaufer writes her poems using different style, diction, and references. In spite of the differences between these two collections, one by an emerging poet working in the lyrical tradition and another by an established poet working in the performative tradition, there is one common image in both collections. In the poem “fantasy sucks/my dick,” Waters writes,

i had this fantasy

i was licking your prick

and i didn’t even mind it

in fact i kind of liked it

i said kind of

I saw her car in the parking lot.

I saw your lips on her neck

and her cock in your hand.

Both Waters and Wetlaufer express lesbian eroticism, in part, with ostensible male sex organs. They speak of cocks and dicks. To explore the contours of lesbian desire, sex, and intimacy, they transgress gender. Reading contemporary lesbian poetry broadly, this transgression isn’t unusual; I wonder the inclusion of pricks is a hallmark of contemporary poetics, and erotics, of lesbian—or queer—experience.

Two themes emerge most strongly from Wetlaufer’s Bad Wife Spankings. The imagery of fertility and infertility are in some of Wetlaufer’s strongest and most memorable poems. In “July,” Wetlaufer begins, “This is no season for harvest./Nothing blooms./Babies don’t germinate in your womb.” Later, in “Scour,” she begins, “A womb: Empty./I birth buttons & bones.”

Wetlaufer connects menses with loss and defiance writing, “I bloom a baby monthly/but each slips off my fingers/like too-loose gloves.” Miscarriages and menses fill the image banks of her poems in ways both subtle and direct. In one of the more haunting poems of the collection, “The Fourth Miscarriage,” Wetlaufer concludes the poem

to the night I found you

digging through the clumps

of tissue in the toilet

the bathroom floor because

that was our son and you needed

to find him and we needed

In all of these poems, there is something both normative and queer in Wetlaufer’s writing about in/fertility, perhaps another hallmark of the domestic in lesbian poetry today.

The second theme that emerges in Bad Wife Spankings is also a duality: marriages, successful and failed. In the deeply wry and ironic conclusion to the poem “Marriage: an Institution,” Wetlaufer writes after a litany of homophobic encounters with family, apparent friends, and strangers, “Bruises/fade to yellow-gray. Shadows darken under my eyes. Your mother: I belong in an institution.” The linkage Wetlaufer shrewdly makes between marriage as an institution and institutionalization is apt and displays some of the complexity that emerges in her work. In another, “Poem Written on the Occasion of Betrayal,” Wetlaufer asks, “How will the name divorcee/sound on my tongue, and what/is the sound of a vow broken?” The final poem of the collection, “Make You Feel My Love,” ends with the negotiation of marriage as institution and as personal encounter.

Still we pay separate taxes & no small measure of shame.

Appliances, bone china, a honeymoon. I’ll come at once.

I’ll come at a run, with snacks. I’ll put my hands

between your legs & catch the slippery child emerging.

When I return, there will be no need for maleficence;

In some ways, the themes of marriage and miscarriage work together in this collection, yet there is also tension between the two, even a disconnect. Given that prizes drive the publishing of poet’s first books and that, among many of these prize-winners, there is a thread of thematic unity in winning manuscripts, I wonder if, when Wetlaufer’s first collection is published, she will focus on one theme or the other. Marriage or miscarriage? Fidelity or fertility? It may be a Solomonic choice for her. I can’t decide of the tension between these two themes is exciting and vibrant or if more unity would strengthen the work. Fortunately, all I need to do is wait a few years to read the answer. Wetlaufer’s first book is surely soon to come.

Chapbooks like Wetlaufer’s Bad Wife Spankings and Waters’s the woman who wouldn’t shake hands are small books, often designed to be read in one sitting. They are usually published in short runs or limited editions. Knowing about them, reading them, owning them, is a sign of a poetry aficionado. A blessing to those in the know; a curse to those who imagine a world in which poetry is a vital part of all of our lives. Perhaps, as more and more book buying moves from “bricks and mortar” booksellers to online acquisition, chapbooks will have a renaissance, not be discriminated against for their lack of a perfect spine, their difficulty to display in bookshops. Bad Wife Spankings and the woman who wouldn’t shake hands are both worthwhile reads. They are windows into the quirky, funny, and powerful lives and experiences of two people and into contemporary lesbian poetry. Reading them, you will be glad you didn’t rebuff Waters; you will celebrate new life, “the slippery child emerging” with Wetlaufer. Revel in this lesbian moment, cock, cunt, dick, prick in hand.

A Poem by Rebecca Hazelton
6th Annual Lambda Literary Awards
“Too bright/ is the heaven I’m after”: A Review of Celeste Gainey’s 'The Gaffer'