Writer and man-about-town, Logan K. Young files a report on what he loved at this year’s inaugural Outwrite LGBT Book Fair.

Unlike the rain that threatened, thankfully, the crowd was steady all day long. The inaugural OutWrite LGBT Book Fair , held on Saturday, August 6, 2011, in Washington, DC was stronger than many book fairs twice her age. With eleventh-hour shout–outs from Metro Weekly and the Washington Blade (the District’s foremost gay newspapers), the friendly confines of The DC Center ultimately proved too small to comfortably accommodate everyone who would stroll in. It’s never easy turning anyone away, but as far as problems on a maiden voyage go, overcrowding is probably the best one to have. Regardless, at some point during her nine-hour tour, everyone who wanted aboard this action-packed ship eventually got on.

My favorite booth at the fair belonged to Lethe Press. Self-described as  “an independent publishing house specializing in speculative fiction, books of gay interest, poetry, spirituality, as well as classic works of the occult and supernatural,” Lethe also had on hand an impressive collection of bear-specific literature. 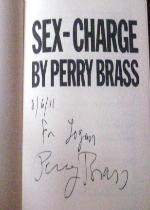 And while I hasten to show my “fanboy” hand here, it was a pleasure indeed to finally meet the much distinguished and long-admired Perry Brass. To wit, I couldn’t help but get his John Hancock on one of the best gay chapbooks in recent memory. 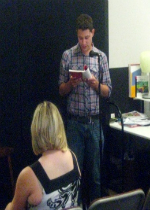 As for the readings, I was particularly taken with a few authors. Michael Graves’ Dirty One follows a gang of adolescent pranksters in the suburbs of Leominster, Mass. — “the plastics capital of America.” (As Graves was quick to mention, it’s also the “birthplace” of Johnny Appleseed.) As it is set in the ‘80s, and thus rife with pop culture references from my youth, I’m looking forward to cracking this one open.

Perhaps the most entertaining reader, though, was David Pratt. Smart, edgy and comfortable behind the mic, his excerpts from Bob The Book held the huddled audience further rapt. As Wayne Gunn wrote in his Lambda Literary review back in December:

“True bibliophiles will luxuriate in Bob the Book. Though the author uses a whimsical conceit on which to base his novel, he never talks down to his readers. And he expects them to be fairly literate.”

Pratt was every bit as likable in person, and this story of a gay book in a Greenwich Village bookstore that falls in love with yet another book remains well worth your time.

Alas, I couldn’t stick around for the late evening round table on Julie Enszer’s new anthology, Milk and Honey: A Celebration of Jewish Lesbian Poetry

(But according to my sources, Enszer herself came off equal parts provocative, candid and witty.)  Co-sponsored by the Washington Jewish Community Center’s Outreach & Engagement wing, luckily, OutWrite’s photogs had a bit more stamina than me. You can see for yourself in this album.

Nestled in the heart of the U Street corridor – DC’s own “Harlem,” before gentrification set in – The DC Center can only hold about 75 to 85 people. And as I came and went this Saturday, the seams seemed ready to burst with new readers, even newer books and authors that were newer still. In fact, that’s what made the OutWrite Fair the hottest seat this side of Boehner’s Congress. From 11 o’clock onward, the Center never went silent. If a writer wasn’t reading, he or she was busy signing their books for readers. And if those readers weren’t busy reading what they just purchased, they were making deals, swap-meet style, for titles they would later. Often at these things, there tends to be an air of braggadocio and one-upmanship, but everyone I met was helpful, polite and gracious to a turn. “This is my first time here at the Center,” said B.J. Brainard of Fairfax, Va. “And I couldn’t have picked a better day to come.”

Read an Excerpt from John Rechy's 'After the Blue Hour'
'The Affliction' by C. Dale Young
Publishing Ins and Outs: Publishing Advice for the LGBTQ Community

Logan K. Young is a contributing writer for BLURT, Dusted and his alma mater’s alt weekly Free Times. He's also written for Crawdaddy!, Option and the Trouser Press Record Guide and been published in The American Mercury, Paris Transatlantic and Perfect Sound Forever. A lapsed student of the late Karlheinz Stockhausen, Young lives with his cat just outside “Suffragette City” in Washington’s harDCcore suburbs. His newest book, Mauricio Kagel: A Semic Life, is available now.