I come up against the same problem every time I try to discuss Dennis Cooper’s work. Transgressive work creates a visceral experience that is deeply subjective, even when using societal morals as an anchor point, and discussing Cooper’s work in a formal framework always has the effect of minimizing the statement of the work. He requires the reader to create a personal relationship with the content.

Cooper’s collaboration with artist Keith Mayerson for the graphic novel Horror Hospital Unplugged (Harper Perennial), is no exception. This work, originally published in 1996 and recently republished this June by Harper Collins, is a story that surrounds the teen band first introduced in the short story “Introducing Horror Hospital” from Cooper’s collection of short stories, Wrong. The story follows a form you’d expect from Cooper – it’s a tragic hero tale of lead singer Trevor Machine, who struggles with sexual identity and his own queerness, is seduced by men who give him tons of drugs, and finds a love he instinctively rejects and destroys. 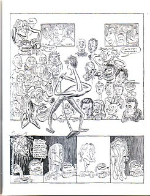 of humor and human tenderness to the front of the narrative. Scenes that would seem stark and desperate with Cooper’s narration become farce. The characters are masochistic clowns and the action becomes dark slapstick similar to Tony Millionaire’s comic strip (which started slightly later in 1998) Maakies. On the flip side, during scenes when Travis Machine begins to fall for his new boyfriend, the art changes to something that looks more like Yaoi Manga style, a genre of comic books in Japan, largely targeting young female readers, that features tender romantic relationships between boys. If, for some, the horrific acts in Cooper’s stories obfuscate the humanity behind what he describes, Mayerson’s illustrations make the emotional through-lines impossible to ignore.

It’s also impossible to ignore how 90s the whole thing feels. As a re-published volume, the work could be a historic relic from 90s zine culture, representative of an ethic and aesthetic in pop culture that has been lost, but retains its relevance through the strength of the narrative. River Phoenix’s overdose, and his subsequent ghost, play a major role in the decision making. Today Phoenix could easily be replaced by Amy Winehouse. The pop culture figures in the story, whether it’s an attention seeking, belligerent Courtney Love or a pervy, power-drunk David Geffen, are signifiers for basic archetypes.

The truth about this graphic novel, for all the value and humanity I see in it, is that not everyone will ‘get it.’ He’s a polarizing figure – the majority of people either love his work or find it creepy and disgusting, with very few on the fence. It’s something that’s generational as well. As someone who was a teen in the 90s, I relate directly to the cultural signifiers at play. I don’t have to decode very much. 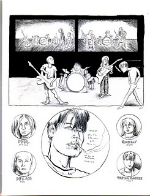 When I think of the problem of describing and understanding Cooper’s work, I’m reminded of an episode of Star Trek: The Next Generation, titled “Darmok.” In this episode Captain Picard is stuck on a dangerous planet with an alien, a Tamarian, that speaks a language similar to English, but using entirely different signifiers as descriptions relating specifically to the Tamarian culture. As summarized by the Star Trek fan wiki, Memory Alpha:

For example, instead of asking for cooperation, they would use a phrase such as “Darmok and Jalad at Tanagra”, because their culture’s stories include a tale of two Tamarians, Darmok and     Jalad, who were brought together while fighting a common foe on an island called Tanagra. The problem with communicating in this fashion is that without understanding the meaning of the reference, the metaphor becomes meaningless. While explaining the structure of the language, Deanna Troi gave the example that “Juliet on her balcony” could be used to describe a romantic situation, but it is impossible to understand if the listener does not know who Juliet is, or why she was on the balcony.

If you can’t understand the references, it becomes more difficult to understand the meaning. While Mayerson’s hand in the work is helpful, it’s unlikely that this volume will help Cooper’s detractors understand his language well enough to navigate his hostile planet.

'The Feminist Bookstore Movement: Lesbian Antiracism and Feminist Accountablity' by Kristen Hogan
Let's Find an Agent for Your LGBTQ Book
'Against Memoir: Complaints, Confessions, and Criticisms' by Michelle Tea

Colin Fitzpatrick is an artist and writer living in Brooklyn, New York. On top of his contributions to Mary Literary, his work has appeared on PBS, NPR, in BUTT magazine, as well as numerous other online venues. You can see a conglomeration of his projects and whatever he’s currently working on at colinfitzpatrick.com