In 1985, I was fifteen years old; I subscribed to Heresies: A Feminist Publication on Art and Politics. The first issue of my subscription had a black cover with white type and a listing of different words for feminists: activists, organizers, progressives, visionaries, etc. As the words progressed down the page, they moved from the laudatory descriptions to provocative descriptions, ending with bra burners, castrating bitches, commie sluts, and pinko dykes. I remember clearly thinking at fifteen, that’s what I want to be when I grow up: a pinko dyke. As I grew up during the late 1980s and 1990s, the term ‘pinko’ as either an epithet or moniker, diminished in its usage. Imagine my surprise to see it as the title of Jen Benka’s second collection of poetry published recently by Hanging Loose Press. In Pinko, Benka reworks the idea of pinko dyke to reflect a contemporary sensibility of what it means to be a lesbian with a radical economic analysis and progressive political commitments.

In the opening poem of Pinko, “Flower Flower,” Benka gathers material about war from presidents; the Greek poet Simonides; the pilot of the Enola Gay, Paul Tibbets; Gertrude Stein and other historical sources. She examines both the conventional and unconventional wars, reaching, searching for meaning. The poem is structured as a prose poem. In the penultimate stanza, Benka links the abstract and the pragmatic, “It is possible that we will not allow lies to accumulate truth. It is possible that we will vote for the candidate who will kill the fewest people.” The use of anaphora in this strophe iterates the sense of possibility that she holds in spite of the history she has recounted; the contrast of the abstractions of truth and lies with the pragmatics of voting and killing reminds us of the stakes we have in uniting the abstract and the pragmatic, the ideal and the lived, the poetic and the politic. With this ambitious poem, Benka introduces themes the book will consider and alerts the reader to the force of the intellect and the passion of the politics that undergirds the entire collection.

Pinko has four sections. The second section is a series of poems each titled with the code words for letters in the military phonetic alphabet (Alpha, Bravo, etc.) “Zulu,” at the conclusion of this section, captures the multiple political investments of Benka and I think the most astute reworking of the word ‘pinko’ for the contemporary moment. The poem begins,

Here Benka sketches activism that is global in its intentions, she later invokes the torture of Biko and meeting Donald Woods “who told me    I reminded him/of his daughter,” and evokes the intensity of the activist experience through the objects that she places in the poem (jackets and white armbands) and by capturing the language of chants. The poem concludes,

you have no idea   what is happening

the absolute evil   that shows its face    in one land

after the next    as they threw rocks yelling hippie dykes

This promise among political colleagues engaged in multifocal activism is echoed in reverse in the final lines of “Pinko,” the final poem in the collection.

I imagine jumping from a plan

free falling onto the grid thinking

this is how fools drown

While “Zulu” shows us a speaker surrounded by comrades, “Pinko” has a dream of isolation. Yet, the forgiveness, like the promise, is a result of continued commitments to teasing out complicated meanings, of “accepting that I am not powerless” and “grieving/the people missing from this project.”

Part of Benka’s work as a poet is reworking existing texts, particularly political texts. In Pinko, she reworks the text of the Defense of Marriage Act (DOMA) in a poem titled “Dixie.” She links the DOMA in her rewritten preamble, “whereas this is the firing line. the front line. the fault line./whereas this is the assembly line. the picket line. the bread line.” Benka unites the contemporary LGBT struggle for against the DOMA with the past struggles of workers and poor people, an astute and deeply political move. The entire poem “Dixie” is a broad and delightful unfolding of what happens when a poet reads and, most importantly, intervenes in policy. 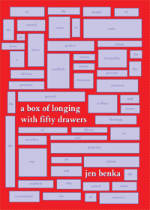 a box of longing with fifty drawers

Similar to “Dixie,” Benka’s first collection of poetry, a box of longing with fifty drawers, is a sequence of fifty-two poems each titled with the fifty-two words from the preamble to the United States Constitution. Each of these poems is an exercise in excavating history, challenging meaning, and reinventing significance. Some of these poems are brief reflections on the meaning of words, particularly provocative when considered as words within an iconic document, the Constitution. Other poems are concrete poems. Still others demonstrate Benka’s lyrical moments. For instance, the poem “In” consists of these two lines, “this is the side no one sees/behind the thin of skin.” Here we see Benka’s keen eye within the poem and her work with consonance and assonance as a poet. The final poem of the collection, “America,” explores the rich and complex history of the United States for contemporary, progressive people. “America” alone is an achievement as a poem, but as the final poem of the collection, it delivers on the expectations of the larger experimental trope around which Benka organizes the collection.

What captivates me the most about Benka’s work is how she gathers materials for her work – broadly and with ambition. There is nothing politically too sacred for Benka to sample, re-examine, rewrite, and re-envision. This ambition combines with the boldness of her vision in inserting lesbian, queer, and progressive values into not only her poems but also the entire world. In addition, Benka’s imagery is fresh and captivating, and the structures that she gives her work are daring, even, at times, brash, which is exciting in contemporary poetry. Granted, in some poems, I wish she had pressed further her poetic attention at the level of individual words and in the line, but I trust that these are areas that she will continue to develop as she writes and thinks more.

Perhaps I respond so strongly to Benka’s work because we are the same age, the same generation, with similar experiences politically. That may be the case, but I think my response is more to a strong poet, intensely engaged in the world. Jen Benka is reworking, in exciting and important ways, a long history of the relationship between politics and poetry.

'Cruel Optimism' by Lauren Berlant
A Poem by James Cihlar
'Uncovered: How I left Hasidic Life and Finally Came Home' by Leah Lax