“If you love universally, you would express it with people of both genders, without discrimination.”

In 2003, Doubleday published James Frey’s harrowing drug abuse memoir cum cautionary tale, Million Little Pieces.  The book was widely praised and anointed an Oprah Book Club pick, sending sales through the roof and making James Frey a celebrity. In 2006, a scandal around the memoir’s authenticity came under fire in the most controversial episode of The Oprah Winfrey Show in history.  Later, Frey would admit that under the pressure of a business which said it would not publish the book unless he classified it as a memoir, he succumbed and presented it as a truthful account of his struggle in recovery when in fact several major details were fabricated to create a better story and a stronger piece of art. This is not terribly unlike the lie I had to explain when I finally came out and had to admit that, though I had professed my love for Jenny at the high school prom, I had always been less into her and more in love with Nate—just that I didn’t have to explain myself to a furious nation of consumers. But Frey owned his dishonesty, apologized and moved on by publishing more books (all novels) and vowed to live truthfully as a way to stay free.

In Frey’s new balls-out, controversial novel, The Final Testament of the Holy Bible (Gagosian Gallery), he tells the story of a bisexual messiah who returns to Earth by way of Manhattan and both delights and spooks New Yorkers after a gruesome accident and subsequent miracles.

Frey doesn’t do much press these days, (outside of his two-part Oprah interview this season) but he is enthusiastic about speaking to the LGBT community. When I spoke with James he revealed the gayest thing he’s ever done (it’s a good one!), the true identity of his kids’ godparents, and how he tirelessly researched the Bible to create a story that challenges conventional faith and inspires readers that anyone can be a healer by offering unconditional love to all of mankind. Oh, and we gossiped a little Oprah, too.

SH: Did you set out to write the Messiah as bisexual or was that discovery found in the process?

JF: I set out to challenge conventional religious belief, and write a book about what I think the Messiah would actually be like if the Messiah were to appear; who that person would be, how they would live, what they would believe, how we would recognize them. At their core, every religion preaches a message of love. The physical expression of love is sex. If you love universally, you would express it with people of both genders, without discrimination. I personally support gay rights, and gay marriage. I think the reason the fight is still ongoing is because of bigoted religious institutions. I wanted to make a statement about those institutions’ hypocrisy, and make a statement against their policies.

JF: I believe in my work. I believe in how I live my life, the friends I make, the people I work with. The Tao says, “if you care what other people think, you will always be their prisoner.” I try to let that idea be a part of every aspect of my life.

SH: The biblical research that you included for this book is incredible. As a non-believer, did the research process for The Final Testament affect your spiritual journey?

JF: The main consultant was an Orthodox Rabbi in New York. He is a profoundly religious man, a man with a deep, deep faith. He is one of the kindest, smartest, most generous people I have ever met. And though we didn’t always agree, we respected each other’s opinions. While I have very little respect for institutional religion, the research definitely changed how I feel about faith in God, which I personally do not have, but which I now respect in others.

SH: Do you remember the first gay person you ever came to know?

JF: I grew up in Cleveland. When I was eight or so, a gay couple moved in next door to us. My parents, who were very liberal, explained to my brother and me that the two men were just like them, except they were two men. It made sense to me, I guess, and my parents treated them in exactly the same way they treated every other couple they knew. And the dudes were cool. One of them was an ex-hockey player who used to play street hockey with us in our driveway.

SH: One of the most interesting characters in The Final Testament of the Holy Bible is Jeremiah: an ex-gay, born again Christian who a Rabbi describes as “not physically imposing, something about him seemed off, as if he were very angry, very nervous, or very scared, or some combination of all of these emotions.”  Why do you think that in 2011 there are still people who are so afraid to be out of the closet?

JF: Because I’m not gay, I don’t know what it’s like to come out. I can’t imagine dealing with it or coming to terms with it if you’ve been raised or live in an environment that might be hostile to it. It’s a courageous thing to do under those conditions, also probably very terrifying. In other cases, I think some people probably just take longer to come to terms with it. Despite the changes in our society, it’s still a straight society, and most children are raised to believe they’re going to live straight lives. I’ve lived in big cities for most of my life, NY, LA, Paris, Chicago, places where the gay communities are very dynamic and vital. If I were gay, I think it would be a ton of fun to come out in one of those places.

SH: When Ben says to the detective, “I can be free anywhere, just as someone can be imprisoned anywhere,” I wanted to scream “Hallelujah,” but I was in a very quiet and crowded coffeehouse, which was kind of ironic, I guess. When did James Frey become free anywhere, and how do you stay in that state of mind?

JF: I’ve become free a few times over the course of my life. The first I was fourteen and my family moved from a big city to a very conservative small town. I didn’t fit in, and quickly realized I didn’t care. Not caring was liberating. Not giving a shit what anyone thought of me was great, and changed me. I became free when I went to rehab and got sober. I became free during the [A Million Little Pieces] controversy, when I promised myself I would never work or publish again in a way or under conditions that weren’t entirely my own. I’m free every time I sit down to write, every time I’m with my kids, every time I look at great art or read a great book or see a great movie or hear a great song.

SH: Wait a second. Was your roommate pissed that you didn’t try it with him?

JF: Nope, he had a boyfriend who was out with us.

JF: Figuratively gay would be asking a gay man, who had been a cross-dressing club performer for several years, to be my daughter’s godfather.

SH: Might that man be a very accomplished writer and reality TV star?

JF: Yes, he’s a great writer, and now is also a farmer and a reality star. And aside from that, he’s a great man and a great friend.

JF: Humorously gay would be knowing all the words to George Michael’s Freedom, and singing them with gusto whenever I hear the song.

SH: What does Oprah smell like? I say Gucci.

JF: I don’t know what she wears, but she does smell good. We hugged at the end of my latest interview with her, and some off her perfume came off on me. It was nice for a couple hours.

SH: Yes, and about that hug, I noticed that when Oprah walked in to the interview there was kind of a formal handshake—no hug at all. After you shared your amends with each other and had such a warm embrace, what was going through your mind?  What did it mean to you?

JF: At the beginning of the interview, I think we were both very apprehensive, and we were both very guarded, and we didn’t trust each other at all. I think we were both prepared for the whole show to go south. Thus the very formal handshake. By the end, I think we had worked out the problems we had with each other and had had a very honest and sincere conversation and had become friends. Thus the hug. It was pretty great. A lesson in a way, at least for me, that no matter how bad things are, if people are willing to be cool to each other and talk about problems, they can be worked out. And we’ve been in touch since. Mostly funny emails. And at this point I would call her my friend. In a real way. And for whatever issues we’ve had, she’s a pretty remarkable woman, and someone I really admire.

SH: Of the bible, the Messiah says, “Those books are dead. They should be taken out of every church on Earth and recycled, so at least they might do some good in this world.” Do you realize how offensive that would have been to my Southern Baptist Bible professor? 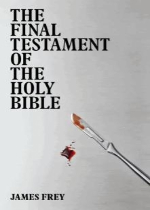 JF: Ha! If the dude deserves to be offended, I hope he fucking is.

SH: If God were real in your eyes, what would you ask God?

JF: Why are you so lazy?

SH: If one of your kids struggled with their sexuality, what would you want them to know?

JF: I’d tell them that it’s okay to be whoever they are, and to love in whatever way feels right to them. I would make sure they knew their mother and I loved and supported them and that nothing would change that. I would also make sure they knew if they ever wanted to talk about anything, I’d be there, and I’d be there without judgment of any kind.

Sean Hetherington co-founded the international volunteer effort and media phenomenon Day Without a Gay covered in the New York Times, on CNN, and in the Wall Street Journal. Appeared as a weight loss survivor success story on NBC's hit American Gladiators (five years after losing 100 pounds). Hetherington lives in West Hollywood with his dogs, Ralph and Cricket where he is a TV development executive.