Finally I succumbed and bought an e-book reader. I’ve not quite made the mental switch yet, with the results that I have twenty-two new mysteries downloaded but unread. The majority of them are really romances, but a few are obviously squarely in the traditional genre.

In particular, I regret not having finished Joseph R.G. DeMarco’s second Philadelphia murder mystery, A Body on Pine (Lethe Press), before the column’s deadline. So far I am enjoying it even more than I did the first in the series.

Two new novels by Lammy winners are set in The Crescent City. But setting is all they have in common. One could hardly imagine two more different mysteries.

Second Chance, the third novel in David Lennon’s series, confirms his talent at creating believable characters in suspenseful situations. As a result of decisions police detectives Michel Doucette and Sassy Jones made in the previous novel, they have begun their own private investigation agency. 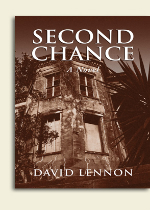 Chance LeDuc has returned to town to create Second Chance Property Development to invest in restoring properties in the aftermath of Hurricane Katrinia. But after bankrolling a sizable chunk of money, he has lost everything when the building he was restoring burns. Suspecting that he has been conned out of the money, he hires Michel and Sassy to investigate.

It just happens that the two men with whom Chance has been dealing are part of the entourage associated with crime lord Priest Lee. Having known him in social functions, Sassy goes to question him, only to have Priest hire her and Michel to find out what has happened to his missing son, the heir apparent to the various games Priest is running.

What follows is as convoluted a case as one could wish, involving various rivalries. But Michel suddenly realizes that the simple solution to a third, seemingly insignificant case  —who sabotaged an aging queen’s Mardi Gras costume—may serve as a model in miniature of what is going on in the two larger cases.

I m enjoying following the growth and development of both detectives. Though I am quite a musical comedy romantic, I confess that, given the surfeit of current mystery romances, I especially delight in having a gay detective who plays the field as hard as his noir heterosexual counterparts do, as he accepts the fact that, despite all current social pressures, he really does not enjoy being tied down by commitment. 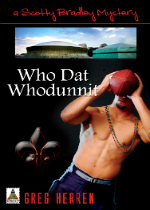 Greg Herren has also bent the usual rules of romance in his Scotty Bradley series by creating a menage à trois. I’m not quite sure why Frank Sobieski has been sidelined in the last three cases. But the fifth in the series, Who Dat Whodunnit, is as much fun as the earlier cases. I’ve always had a special fondness for Scotty, despite his claims to be psychic.

The present mystery occurs in January 2010 as the Saints march triumphantly to the Super Bowl (hence the title). A homophobic group calling themselves Protecting American Marriage, or PAM, plans a massive rally at a fundamentalist church in the suburb of Kenner. But two of its female supporters are killed with a gun belonging to Scotty’s mother. Scotty and Colin Cioni, the third lover, who returns from his latest mission, start investigating, only to find their own lives endangered.

Because of PAM, issues of national importance are raised, but slowly the case becomes a Bradley family mystery. The first victim to be discovered was dating Scotty’s cousin Jared, a player for the Saints, and other family members show up in the oddest places all the way to the final consanguineous confrontation.

Part of the fun in reading a Herren mystery is catching the author’s various appropriations. Jared’s date is Tara Bourgeois (the name is delicious)   Miss Louisiana USA, who lost out in her bid for the Miss USA title after she cut gay and lesbian marriage during the question session. Does anyone still remember Miss California USA and Perez Hilton of a few years back

On the literary front, allusions to Cat on a Hot Tin Roof run throughout the novel. In the opening paragraphs one hears echoes of Dickens and Lewis Carroll. Who knows what all I have missed. The novel (and the series) confirms Herren’s preeminence on the mystery scene.

Originally published in the U.K. in 2010 as Oscar Wilde and the Nest of Vipers, Gyles Brandreth’s Oscar Wilde and the Vampire Murders, this fourth novel in the series, was re-titled I presume to cash in on the current vampire craze here. True, the victims have two puncture wounds, one of the lead characters, Rex LaSalle, is a self-proclaimed vampire, and Bram Stoker is an important character. And the novel is structured, much like Dracula, out of journals, letters, and other documents.

Arthur Conan Doyle returns, and once again Brandreth plays with the conceit that Wilde is an important model for Doyle s creation of Sherlock Holmes. As in earlier novels, many of Oscar s bon mots are lifted not only from his own writings and conversations but also from the Holmes stories. 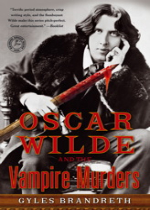 The novel’s setting is London in March 1890. The city is still on edge from the Jack the Ripper murders and buzzing about the Cleveland Street scandal. The sexually ambiguous Prince Eddy, along with his womanizing father (the future Edward VII), is a prominent character. One of his father’s mistresses is the first victim, and it is the Prince of Wales who asks Oscar to discreetly investigate the circumstances. The solution is ingenious, quite believable, and quite equally sad.

The bisexual Oscar explores his gay side here more than he has since the first novel in the series (Oscar Wilde and a Death of No Importance). He is quite smitten with the vampire Rex—”a pale-faced Adonis,” Stoker calls him. Prince Eddy remains as much an enigma here as he was in real life. I became so intrigued by Brandreth’s descriptions that I followed his novel by reading Theo Aronson’s Prince Eddy and the Homosexual Underworld (1994).

Though nothing can possibly match the sheer audacity and surprise of the first novel, I enjoyed this one the most so far. Whereas in the earlier mysteries, the author sometimes seemed to be straining too hard, here Brandreth seems more relaxed and in complete control of his materials.