Holden uses the language of another generation’s fairy tales to write modern tales, complete with spurting cum and rigid pricks. Erotica, like all literature, is written to entertain and educate and because as gay men we tend to think with our dicks, erotica is an ideal medium for transferring one generation’s knowledge and tales to the next. Holden does that by using a form we loved as children and populating it with sexy men. And like all fairy tales, there is a lesson to be learned in each one about honesty and kindness. I felt a special affection for Holden’s characters because they reinforced my feelings that my sexuality is positive, not negative.

“The Prince and his Companion” is the story of a handsome young prince who asks his father’s permission to travel after his 21st birthday. His father allows him to go if he promises to travel with his father’s loyal and faithful servant Jonah. His second promise is to come home with a bride.

Exhausted from the day’s travels, the prince closed his weary eyes, but sleep would not take him. He could not stay still, for now all he could think about was Jonah’s body lying next to his. He could feel the heat of their bodies building underneath the linens. He could smell the scent of Jonah’s warm, masculine odors moving closer to him, engulfing him, almost suffocating him. His life-long urges seemed to boil just below the surface. His heart pounded, causing him to fear that Jonah would hear the sounds of his desires. Then he felt Jonah stir. He held his breath, fearing something he could not describe yet anticipating it all the same. The warmth under the linens grew as Jonah moved closer to him….The prince, nervous and full of sinful urges, placed his lips upon Jonah’s mouth. Their mouths opened and their tongues met in a feverish moment of passion.

The next morning as they get ready to leave the inn, an old woman gives them a glass bottle. After the prince has left the stable, Jonah fearing the contents of the bottle, lets it slip. When it falls and breaks, all the horses in the stable die instantly. When Jonah sees a raven picking at the horse corpses, he strangles the raven and puts it in his pack. When he gets to the next inn, he gives the owner the dead bird to feed his guests in lieu of paying for a room. The inn is a den of murderous thieves and just as they are about to kidnap the prince they all fall dead because they ate the stew made from the raven’s poisoned body. 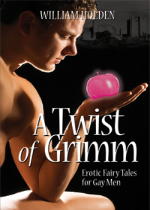 The prince ventures on and meets a princess. I won’t spoil the story with the ending but will say that he marries the princess and because it’s a fairy tale the prince still gets to live happily ever after with Jonah.

In “The Penance of Three,” a hermit who has lived right by God realizes an angel is no longer following him in the forest after he condemns a young man to the gallows for sleeping with another man.  Wandering lost in the forest, he hears the song of a bird and comes upon a blue bird. When the hermit tells the bird of his dilemma, the bird says, “You did a great injustice to the Lord the moment you condemned a poor young man. All he did was love someone else.” The hermit is told his penance is to carry a dry branch on his person and to lay it at his head until its sprouts three green leaves. He thinks that’s easy enough, until he’s told he has to bed three other men in order for the twig to sprout. The hermit goes into the village seeking a man to lie with him and is turned away at every home. He finally gets to a house where he’s greeted by a handsome young man who has heard about him.

“So if you are agreeable to my needs you will lie with me tonight?” The hermit began to twitch excitedly, for he was that much closer to completing his penance, and surely this man knew of others he could bed with.“I am a man of many fancies and tastes, but the likes of you do things to me that no other could possibly do. I have lain with many men, but never done so with someone with such a rough exterior as you have. You are at last twice my age, and you have more hair on your face than I have on my entire body. It stirs something inside of me I cannot express.  Come with me to my quarters and we will spend the night in heavenly bliss.”

That alone does not sprout any leaves. As the hermit wanders further into the forest he comes upon a cave and a woman with three evil sons. Turns out, they were the ones who beat up the young man, and they in turn need to do penance. In the end, without going into the details, everyone has a lot of sex and the twig spouts three leaves.