The lazy hazy crazy days of summer are upon us and who isn’t ready for some really good escapist reading? Nothing says “summer” for this reader like mysteries, and there are some super reads available to take to the beach—or the back yard or the roof. Satisfying, page-turning, just romantic enough—what more could a lesbian reader want for the oppressive days and nights when all we want is vacation, please?

Read on to see the not-to-be-missed mysteries that are like a tall glass of iced tea with just a little kick, to quench your genre thirsts this summer. 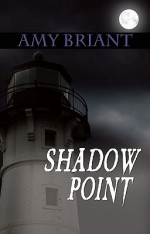 What’s more creepy than a lighthouse, a deserted beach, spiders, a top-secret government-controlled project and a dead body? Finding out that the dead body is your estranged brother and that as his only living relative, you get custody of his young daughter, who doesn’t know you and doesn’t know that her father—only 33—has died or been killed and possibly murdered.

That’s how things start out for Madison McPeake, immediately after she’s temporarily furloughed from her job for something resembling insubordination.

Madison hasn’t seen her brother since he discovered she was a lesbian several years earlier. A member of a conservative religious cult, James had focused his life on his job and his beliefs. While obviously loved, in the end his daughter seemed an afterthought in his life; he left all his worldly possessions and life insurance to his church. Which in turn leaves the possibly soon-to-be unemployed Madison to take on her five-year-old niece, Katie, and also—because she finds she can’t help herself—uncover how her brother really died and what exactly is going on near the little bungalow where the two lived at Shadow Point, a secluded Navy enclave/cove by the ocean outside San Diego.

Madison admits to not being a very good lesbian—she hasn’t had sex in ages and she hasn’t pursed anything but one-nighters since she and her last lover, Isabelle, broke up. So when she sees a very attractive woman on the beach surfing—and then getting out of her wetsuit—in front of her, she feels a little icky for her voyeurism, but it reminds her that she really is a lesbian after all. A lonely and sex-starved lesbian, at that.

The lone surfer is actually one of the scientists, Dr. Alice “Pipe” Piper, on the project—was it a project? No one will answer her many questions—that her brother was working on.

Sparks fly between the two women (a little quickly, but then both seem to need it), but all is not right at Shadow Point, and Madison is not the sort to just walk away from a mystery. (She’s breaking into an abandoned bungalow to investigate when she comes across the soon-to-be-naked Dr. Piper.)

Especially not a mystery that involves dead things. Lots of dead things: not just Madison’s brother, but bugs, birds, lizards, a possum, a snake. The dead things mean something. And of course, there are the spiders.

Briant’s characterizations are strong. Madison’s first-person narration is in the hard-boiled-and-lives-alone-with-nothing-in-the-fridge-but-alcohol-and- condiments amateur detective mode and rings true. Madison has conflicted feelings about her family (both parents were already dead when she gets the call about her brother), religion, children, sex and life. We believe everything about her right from the first paragraph. And like her, despite her foibles.

The suspense is also intense. Briant manages her settings well; we feel our spider sense tingling right along with Madison from the point where she breaks into the bungalow to the point where she knows that her brother didn’t just succumb to shock in the small tide pool where he was found after being stung by some sea creature. He was a professional. And he wouldn’t have left his small daughter alone, no matter what the will and insurance policy suggest.

Shadow Point is a solid and rewarding debut novel. Madison is a character who could easily return for a sequel and the novel’s flaws—some rushing of the plot, especially the romance—are minor and no doubt Briant will develop as she continues to write.

Shadow Point is super summer reading. But for the beach? Maybe not… 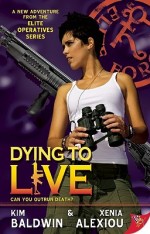 Okay, I admit it: I am a fan of adventure/spy/thriller mysteries and always have been. So of course I have been lured into the web of the Baldwin/Alexiou Elite Operatives series because as a kid, I was always imagining myself in the male leads of the spy thrillers I read. Baldwin and Alexiou clearly had the same fantasy. Their fifth in the series,  Dying to Live queries: “Can you outrun death?”

You’ll have to travel from small-town Italy, to Hungary, to Beijing, to Columbia, to London, to Germany to Philadelphia to Washington, D.C. to Colorado to Geneva and back to find out.

First, a disclaimer: While this series has many of the solid plot points necessary for a thriller, a little suspension of disbelief is necessary as is the case with all such thrillers. But the Greek Alexiou, whose bio says she lives in Europe and considers herself a citizen of the world, brings a verisimilitude of place to the writing team which helps propel the international flavor all these books have.

In this latest, we begin in the midst of a Middle Ages-style plague that will remind many of Camus and Crichton. We end up in Bogota, one of the political- and drug-mayhem capitals of the world. In a story ripped from the headlines as they say on “Law&Order,” like so many privileged business people traveling in the country, Zoe Anderson-Howe is kidnapped by FARC guerillas. More of a socialite than anything else, she’s far from equipped for survival under what are extremely harrowing circumstances. As she waits for Daddy’s money to free her, the clock ticks–loudly.

Meanwhile, our gal Fetch, one of the Elite Operatives, has been living a difficult life in the Columbian Guaviare jungle for six months going from one rustic encampment to another. Her mission is clear: infiltrate the FARC, free the various hostages being held by the guerillas–including now, the lovely Ms. Anderson-Howe who she meets in a rather unorthodox fashion at the most solid of the camps.

Zoe’s father, Derrick, has gotten the ransom and has contacted the Elites who specialize in the sort of Entebbe-style rescues that various governments want to steer clear of. Proof of life is offered and then….

Then the plague interferes with any kind of rescue, because that plague-like virus is spreading and every operative is needed elsewhere. The World Health Organization is involved because more than 63 countries become infected and more than two million people have died from what is being called the H1N6 virus. Suicide is rampant among the sick and the survivors. Martial law is declared in more than 20 countries and all hell is breaking loose.

And Zoe may be the key to what is going on.

Baldwin & Alexiou have established a formula for this series that works: short, staccato chapters set in different locales that unfurl the plot layer by layer and then they develop into solid chapters where the main characters—in this book, the good soldier Fetch and the spoiled brat Zoe–begin to reveal themselves. Former Operatives appear in the novel as well (although this sometimes clutters the text in that Russian novel kind of way).

The authors manage to take two plot themes that have been done and done again, meld them, and turn them into a solid, convincing, compelling page-turner that is quite satisfying.
—— 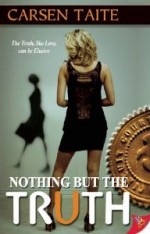 Nothing but the Truth
by Carsen Taite
Bold Strokes Books $16.95 264pp

“What if someone you loved was accused of a crime? Would you want them to hire an advocate, or just show up at the nearest police station expecting fairness and mercy?”

So asks Brett Logan, defense attorney, of Ryan Foster, prosecutor, midway through Carsen Taite’s latest novel, “Nothing but the Truth.” (Which has a very sexy cover, btw.) The query defines the conflict between the two characters which is the common thread throughout this fast-paced mystery/thriller/romance.

Taite has developed a formula in her novels of pitting her lesbian protagonists against each other and then watching them duke it out. Brett and Ryan fit neatly into that mold, which keeps the sparks flying early and often. Some readers may find the connection a little strained, but it’s certainly as believable as any John Grisham coupling–and this novel is very much a Grisham-esque legal mystery.

Brett’s new client pits her against the up-and-coming Ryan who is determined to be the first woman District Attorney in Dallas. Ryan isn’t about to let something as superficial as sexual attraction derail either her career track or her belief that the case is a slam-dunk and will help propel her into office. As a defense attorney, Brett is just as determined–to give her client her best defense and also to get Ryan into the sack. But complications in both the case–one of the attorneys is called as a witness, another steps outside the law–threaten both women and their possible romance.

As a criminal defense attorney herself, Taite knows her way around a legal case and as with Grisham or Scott Trurow, those aspects of the novel are solid, which makes the book more compelling. The twists the case takes make sense because we know Taite isn’t just inventing them for literary convenience. (And yes, you do want Brett defending you.)

Nothing but the Truth unravels a lot of lies before it ends, but will keep Taite’s burgeoning legion of fans coming back for more.

'The Air You Breathe' by Frances De Pontes Peebles
'Nickels: A Tale of Dissociation' by Christine Stark
'The Laboratory of Love' by Patrick Roscoe