Scholars from many disciplines engage in heated debates over the definition and role of LGBT Studies. They question whether LGBT Studies should be an independent academic discipline, or if LGBT Studies scholars should “queer” the curriculum. They also question whether or not LGBT populations have distinct histories and cultures parallel to those of “heterosexual” communities and nations, of which LGBT people are also a part. Last but not least, scholars engaged in LGBT Studies identify different starting points for LGBT history, as there are many theories as to when LGBT people officially identified themselves as individuals and communities different from heterosexual people. Because so many perspectives on LGBT history exist, there are very few LGBT history books that will satisfy everyone.

Dartmouth University Women’s & Gender Studies professor Michael Bronski describes his book A Queer History of the United States (Beacon Press) as an “attempt to ‘queer’ how we think about American history.” According to Bronski, an LGBT history separate from mainstream history does not exist. At the same time, we cannot deny that LGBT Americans are a distinct population. Since the late 19th century, LGBT scholars have been collecting evidence of their presence in North America, as well as the significant role that LGBT people have played in the formation of the United States and its mainstream culture. Bronski claims that this drive to promote LGBT history as a distinct branch of American history is a “transitional” moment in the history of scholarship; he believes that one day all American historians will address the existence and contributions of LGBT people in their narrative, or that LGBT identity will become a non-issue completely. Regardless of Bronski’s perspective on queer history, he has written a comprehensive, engaging text, showing that there have been LGBT people—of all races and classes—in all aspects of recorded American life for the past 500 years. This includes people from many Native American tribes who sometimes switched gender roles and practiced what would be consider homosexual activity today.

Once European explorers arrived in the Americas and settled there, the leaders usually sought to enforce a strict patriarchal heteronormativity. One theory about why this trend continues in the United States states that it is due to the fact that we are a nation of immigrants, and our national unity depends on fighting a common enemy—in this case, sexual deviants and genderqueers. Unlike many historians who write about white imperialism in North America, however, Bronski uncovers the fact that many white settlers (who later became Americans) were sick of the intolerance and sexual restrictions of their societies. He tells the story of Merrymount, a town founded by Thomas Morton in 1624, not long after the Puritans set foot in what is now New England.  Merrymount (popular 17th century English slang for recreational sex) had an 80-foot phallic symbol in the town center, and its residents included freed indentured servants and people who intermarried with the local Native American tribe.  In 1629, the Puritans discovered Merrymount and dismantled the entire town, sending Morton back to London. It took more than two hundred years for Americans to challenge heteronormativity again. Many 19th century social reformers (most of whom identified as heterosexual) argued that sex can be practiced for pleasure, and should not be subject to restriction if consensual. People such as Karl-Maria Kertbeny, Emma Goldman, and Alexander Berkman, according to Bronski, could be the true founders of the gay liberation movement, even though none of them were gay themselves.

Karl-Maria Kertbeny was the first to coin the term “homosexual” in 1869; this gave many men the ability to categorize themselves by their sexual orientation, and provided the impetus for those men to seek each other out and form communities and organizations.  After World War Two, gay activist groups such as the Mattachine Society formed to fight for their civil rights and sexual freedom. Unfortunately, these groups were often split due to their perspectives on the meaning of LGBT equality. Bronski argues that modern gay historians must address this schism in the gay struggle—whether or not the LGBT communities feel that they are the same as straight people and want to blend in, or want to acknowledge and maintain their difference, while fighting for equality under state and federal laws. There are many times in A Queer History of the United States where Bronski appears to assign a “role” to LGBT people as subversives throughout American history, simply by their existence. For this reason, Bronski’s book would make for a controversial text, and perhaps send the wrong message about LGBT people to those seeking a less biased history. 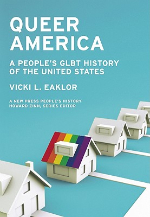 Queer America is structured like a textbook. Each chapter includes a debate section designed to encourage discussion of the topics, as well as a list of suggested resources for further reading.  The first chapter focuses on defining LGBT history, as well as providing definitions of key terms in LGBT Studies. The second chapter summarizes the history of non-heteronormative behavior in North America prior to the 20th century. Each chapter thereafter covers a decade of American history during the 20th century, how legislation and world events affected LGBT people in the United States, and the role that LGBT people played during that time period. To complement each chapter, Eaklor includes photos of little-known but prominent LGBT Americans from diverse backgrounds, as well as photos of protests, book covers, and art that addresses LGBT issues.

Both Bronski and Eaklor’s books have cited extensively from many core LGBT history books, including the works of Jonathan Ned Katz. Katz’s Gay American History remains the gold standard for LGBT American history; he lets the primary sources speak for themselves, and leaves it up to students and scholars to interpret them as they will.  During this time of governments flip-flopping on whether or not LGBT issues can be addressed in public school history curricula (or at all), all writers of LGBT American history books face a major challenge in leaving their own opinions about LGBT civil rights issues at home.

'The New Woman' by Emma Heaney
What Happens at Night is the Dream-Like Story of One Troubled Couple
'Diaghilev: A Life' by Sjeng Scheijen