This spring brings two new novels from past Lambda Award Winners, Boyfriends with Girlfriends by Alex Sanchez (Simon & Schuster) and She Loves You, She Loves You Not… by Julie Anne Peters (Megan Tingley Books/Little, Brown).  Sanchez and Peters are two of the rocks in the foundation of  GLBT YA fiction, and since I was such a fan of their earlier works, I thought it would be fun to see what was up with their latest contributions to the market.

Boyfriends with Girlfriends is Sanchez’s attempt to discuss bisexuality in a teen setting, which I was thrilled about.  I’ve been looking for more teen fiction featuring bisexual characters.  As you can probably tell from my column on transgender YA fiction, I’m a big advocate for all the letters in the GLBT rainbow, and I really appreciate it when everyone is represented. 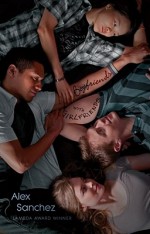 This latest offering from Sanchez is narrated by four different characters, Lance, an out-and-proud gay guy, his best friend Allie, who is straight-but-beginning-to-question, Sergio, a bisexual guy just coming out of a rocky relationship with a girl, and Kimiko, Sergio’s butch lesbian best friend.  World’s collide as Lance and Sergio begin to date and Kimiko and Allie bond and discover their own attraction.

This is a quick read, and I found myself drawn in quite quickly.  The dialogue felt largely inauthentic for teenagers and I found myself cringing every time someone fist-bumped or any time Kimiko called someone “dude”.  But I perservered and actually enjoyed myself.  While the topic of bisexuality is handled in a heavy-handed manner (Lance struggles with his belief that bisexuals are really gay and afraid of saying it) and a minor subplot of about parental acceptance is glossed over and resolved far too quickly, I somehow found myself compelled to keep reading and see these characters through to the end of their journey.

I was also disappointed that Sanchez chose to make the character of Sergio, the out bisexual character, promiscuous, without discussing those stereotypes as they relate to the bi community.  An OK read best suited for reluctant readers, made that much more significant by the dearth of books covering bisexuality in the teen market, but I do wish there had been more to love.

Julie Anne Peters’s latest, She Loves You, She Loves You Not, goes in another direction.  Narrated by Alyssa, a teen lesbian who has been sent to live with her estranged mother after an unspecified incident involving her first girlfriend and her father, Peters deals very specifically with parental acceptance, and with first love turned sour. 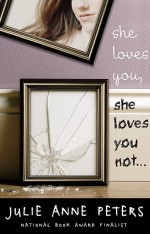 As Alyssa navigates a relationship with her mother, Carly, a stripper and possible prostitute who abandoned her, she also discovers the beauty of the Colorado wilderness, and forges a hesitant relationship with Finn, a local girl who she can’t seem to pin down.

I’m always a huge fan of Peters’s writing, and so it was no surprise that I fell in love with She Loves You, She Loves You Not.  Flitting between past and present, Alyssa’s personal tragedy is revealed in pieces as she gets a job at a local diner and falls in love with Finn, who fluctuates between standoffish and friendly.

It is finally revealed that Alyssa has been sent to Colorado because her father refuses to accept her as a lesbian, and that she has recently been betrayed by her first girlfriend, an incident that emotionally shattered her.  Peters does an amazing job portraying a character who is so desperate to love, but who has been hurt so badly that she is reluctant to trust.

My one concern, once again, involves the portrayal of bisexuality.  The incident involving Alyssa’s ex-girlfriend includes two characters (who identify as gay) coming out as bisexual and acting dishonest and callous.

While this seems realistic to teens who are still exploring who they are and playing with labels while they discover who they are, I was saddened that the bisexual character (and her bisexuality) ended up being the bad guy.  I won’t even get into the issue of a lesbian leaving her girlfriend for a man.  That’s a whole discussion on it’s own.
——
She Loves You, She Loves You Not…
By Julie Anne Peters
Little, Brown Books for Young Readers
Hardcover, 9780316078740, 288pp.
June 2011

T.S. Ferguson is a freelance developmental editor and an avid reader of young adult and children's books. He was previously an Assistant Editor with Little, Brown Books for Young Readers.