A Conversation with Dale Peck and Abdellah Taïa

A Conversation with Dale Peck and Abdellah Taïa

1. True. He came out in 2006, while on a French television show, promoting his book Le Rouge du Tarbouche. More important, though, he says, was when he came out in Morocco itself, in an interview with the weekly magazine Tel Quel. He was in Tangiers at the time, and when he saw the magazine, he closed the door to his hotel room, drew the curtains, and used the furniture to barricade himself in the room. “It’s funny now,” he says, “but it wasn’t then.” His mother called and asked, “What did you do?”

2. True. As a 13 year-old, he came across a still image of Adjani in a French film magazine. She was playing Lucy Harker in Werner Herzog’s Nosferatu. Her face was haunted, Taïa recalls, as if she were waiting for the spirit that haunted her soul to speak. At the time, he had been keeping a journal to practice his French, and when he discovered the Adjani was of Algerian and German descent, he realized that he, too, could reinvent what was ‘French.’

3. True. (For further details, read Taïa’s Salvation Army.) “But you have to understand,” Taïa says, “that I grew up with 11 people living in one room. My body was next to other bodies at all times, and the frontiers were not clear in the house.” Even in innocuous situations—changing clothes, preparing for the day—bodies gave off erotic signals. It was sexual without necessarily being physical. Besides, Taïa explains, he was very aware of his own body. At 16, after reading an article about varicose veins, Taïa would prop his legs up against a wall, thinking, “That’s one less disease to worry about.” 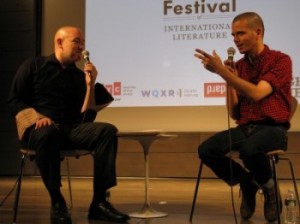 5. True, mostly (trick question). Taïa is Muslim, partly out of the desire to remain connected to a general ‘Muslim-defined experience.’ “All religions are restrictive,” Taïa says, “but I want need to be free within my religion.” Though in the light of day, he can proclaim, ‘There is no God,’ at night, when he turns off the light, verses of the Koran run through his head, and He comes back. Besides, he had never practiced much of a formal religion. Instead, his mother showed him how to practice, even in the tiny home. Every morning, she woke him and said, “Come, we’re going to talk to the sky,” and they went to the open window, looking into the morning air, and invented prayers.

6. True. As Taia says, “I had to be truthful in my writing, because to write is to speak truth—your own truth.”