In Every City and Town: Singing Whitman’s (and Our) America

In Every City and Town: Singing Whitman’s (and Our) America

Daniel Redman reminds me of Jonathan Silverman in the movie adaptation of Neil Simon’s Brighton Beach Memoirs. He has the glasses, the slightly nasally voice, the boyish looks, the charm and, well, he’s Jewish. I do like me some Jewish boys.

When I heard someone had begun setting Leaves of Grass to music, music akin to a cappella chanting, I knew I wanted to hear it. I’m a musician, poet and die-hard lover of Whitman. Though I’ve heard a ton of Whitman musical settings over the years (he and Emily Dickinson are perhaps the two most frequently set poets by American composers), I had no idea what to expect. Also, I’d never heard anyone setting any of his work for solo, a cappella voice.

When I got to the San Francisco Public Library performance — a little late — the James C. Hormel Gay and Lesbian Center was packed. Daniel was already up and singing, eyes closed, hands clasped and body swaying — in the middle of the audience seated in a circle. The physical configuration of the event and the music coming from Daniel’s throat reminded me of shape-note singing — the Christian tradition of stridently sung hymns, marked by clarion harmonies, and, especially in Daniel’s case, chutzpah. 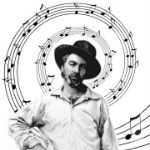 This was no small feat considering that his compositions were virtuosic on so many levels. He sang long-breathed phrases spanning two octaves. There were crisp monosyllabic utterances mixed in with frequent melismatic phrases, that is, vowels assigned to be sung on many, many notes (it’s Jewish and Black gospel and Beyonce). The singing was tonally sophisticated (using various modes and key changes) and moved between tender reverence to outright democratic bombast. Sacred. Buddhist, Jewish, Catholic, Protestant and Pentecostal. I’m not kidding.

Daniel’s an attorney for the National Center for Lesbian Rights and wrote this music for our community, for us to preserve and celebrate who we are — and have been — throughout Papa Walt’s (and our) American diaspora.