Glen Retief is an Assistant Professor of English and Creative Writing at Susquehanna University. He has been published in The St. Petersburg Times and the Pittsburgh Courier-Post, along with a variety of literary journals.  He has been awarded a James Michener Writing Fellowship and the AWP Intro Journals Award for Creative Nonfiction, and he lives in Sunbury, Pennsylvania.

Nina Herzog: Your new and exquisite memoir, The Jack Bank: A Memoir of a South African Childhood (St Martin’s Press), hailed by Robert Olen Butler as having “the deeply resonant literary power of the finest fiction,” has already garnered enviable critical success. How long have you been writing it?

Glen Retief: That depends on how you define “it”!  After publishing an essay called “The Jack Bank” in Virginia Quarterly Review in Spring 2008, about my experiences of out-of-control hazing in a whites-only boarding school, St. Martin’s Press commissioned me to write a book length version looking at what came before and after.  Nothing like a deadline, is there?

I immediately got to work and finished a first draft in December 2009.  My editor, Elizabeth Beier, sent me substantial (and brilliant) revision requests.  I then completed a more-or-less final draft in May 2010, and soon after that the manuscript got accepted.  So two years or so.

​But of course I spent years as an apprentice writer getting ready to write The Jack Bank. If I go all of the way back to my first short stories dealing with the subject, I would have to say the book took me a decade and a half. 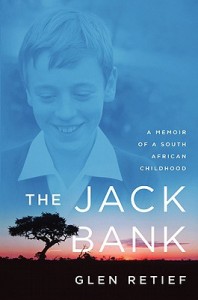 NH: The book covers an entire childhood, adolescence and beginning adulthood with remarkable detail, from 7 to 22, down to the smells that reminded you of other smells, etc.  How much would you say you had to stitch together and how much comes from direct memory?  It’s the sensory details that I’m interested in, not so much the dialogue.

GR: I wish I were a walking movie camera, but in fact like everyone else I carry around in my head a jumble of fragments of the past that wouldn’t make for a very interesting story if I just reported them.  So the novelistic-cum-cinematic precision of detail in The Jack Bank is art, not fact—literature, not reportage.

In other words, the book re-imagines my childhood rather than just remembering it.  It’s a good faith recreation, meaning I really tried my best to be accurate.  I didn’t ask, “What would make a good story here?” as a fiction writer would have.  Instead, I asked, “What probably happened, given what I do know and remember?”

But then I wrote that as a fictionalized scene, re-imagining the smell of rotting fruit, the hum of mosquitoes, a sausage tree silhouetted against the Milky Way—whatever.  Doing this allows readers to enter my childhood in a way they wouldn’t be able to do with a rigorous factual account.

Memory is so fluid!  At this point I have much richer and more specific recollections of my childhood than before writing The Jack Bank.  I love that my memories now feel like a movie.  Sometimes it disconcerts me a little—what I have I been doing with my own neurons?  But then I think, to whom could it possibly matter whether or not there was a full moon on the night the death squad policeman showed me how to use a walky talky?

NH: The actual experience of “the jack bank” — when an elder private school matric enticed you to volunteer for beatings in order to earn extra jack (beating) points to bank — permeates the entire book.  Looking back at it now, at the age of 41, how do you feel about the experience?

GR: With a memoir out in the world, my first instinctive reaction is: “Thanks so much, all of you bastards, for giving me such great material!”  And really, the idea of earning interest on beatings, with the whole thing neatly written down in an accounting ledger.  Could I have asked for a better metaphor for the way cycles of violence spin out of control, eventually obliterating our shared humanity?

More seriously, I’m reminded of a decade-old conversation between my sister and me.  As you know, I write in the book about my sister being abused by my grandfather—she told my parents about it at almost exactly the time I told them about my boarding school abuse.  It was quite the double whammy for them.  Anyway, Lisa and I talked about our respective memories of abuse, and we both agreed that at a certain point such things just become a fact of life, something one incorporates into oneself without grief, self-pity, or judgment.

I do think the jack bank has given me a bit of a jaundiced worldview.  I don’t trust things that appear well ordered–my boarding school would have looked fine to the casual observer.  Put me in a Swiss village with chiming cuckoo clocks, and I’ll ask, “Who’s being kicked around in these lovely little log cabins with their blossoming front porch geraniums?”

NH: As an eventual anti-apartheid gay activist who helped usher in the first constitution that guaranteed equal rights for gays and lesbians, how do you feel about the current AIDS situation in South Africa?  Has there been much AIDS writing from the country?

GR: The AIDS situation in South Africa is a catastrophe that in many ways equals that of apartheid.  Six million people are HIV positive—more than one in ten South Africans.  In the impoverished black townships, many people attend three or four funerals every weekend.  My parents’ housekeeper, Nora, has lost a brother, daughter, son, and many friends; she is raising a grandkid by herself.

After a lost decade in which former president Thabo Mbeki argued that AIDS wasn’t caused by HIV, and in which the health minister suggested beets as an AIDS treatment instead of anti-retrovirals, the government is finally advocating widespread testing and state-supported medical treatment.  But the scale of the epidemic makes it overwhelming.

I know Mbeki’s AIDS denialism was sincere rather than malevolent, but its consequences were still devastating.  Words kind of fail me.  To me, Mbeki sits in the company of Verwoerd and Botha as a villain of South African history.

If South Africa has a literature of AIDS comparable to that, which arose in the USA from 1980-2000—a literature that focuses centrally on a protagonist or community’s efforts to cope with the epidemic—I’m not aware of it.  However, lots of South African novels deal with the issue among the many others facing the nation.  There’s a great novel by Phaswane Mpe called Welcome to Our Hillbrow which talks a lot about AIDS.

NH: According to Judith Barrington in Writing the Memoir, memoir is a genre that has been disproportionately used by oppressed groups to tell their stories.  As an immigrant queer South African memoirist writing what may be the first South African LGBT literary memoir—as opposed to novel, autobiography etc.–has memoir been a tool of empowerment for you?  I note you teach creative nonfiction at Susquehanna University and spent many years studying creative writing in the US.

GR: That’s exactly right.  I doubt I would have ever written this book had I stayed in South Africa, and not just because it took coming here to make me realize how crazy my “education” had been.

“What do you mean?,” I asked people in the early years, and “Didn’t you have 17-year-old prefects thrashing you almost daily when you were 12 years old?”  But also, in South Africa as in most of the world, creative writing wasn’t taught at school or college.  And to the extent people thought of writing a book, it was always novel or poetry.

​Here, in the land that produced Thoreau, Mary Karr, Tom Wolf, and John McPhee, things were different.  I got into creative nonfiction by taking a class in the Ph.D. program at Florida State from Bob Shacochis, who refused to teach fiction despite having won a National Book Award for his short stories—he said student fiction was almost always “inauthentic.” I planned to submit fiction to Bob in defiance of his policy and insist on feedback on my own terms.

Instead, I immediately fell in love with this new genre.  There was something powerful at so many levels about sharing directly, without the protective screen of the fictional persona, my experiences as a gay man growing up in rural Africa—in the kind of place Orhan Pahuk called “the provinces of world culture.”

Yes, my early readers were fascinated with the exoticism—chasing hippos out of the front garden, and so on.  But more than that, they were moved to hear from someone whose life experience was so different from their own mostly straight, white, middle class suburban backgrounds.

NH: Do you have anything to say about the antigay bullying and suicide stories that have recently been so prominent in the media?  I think of the “It Gets Better” campaign started by Dan Savage.

GR: Adults have an amazing capacity to forget what it was like to be young.  Although intellectually they may recall filling the living-room with their teenage friends when Mom and Dad were away, and how hard they worked afterwards to straighten the end tables and dispose of the beer bottles half a town over, somehow these grown-ups keep believing that if their own kid is in serious trouble, they’ll somehow pick up on it.  They won’t.  My own parents didn’t, not even when I was being beaten with pillowslips filled with athletics spikes.

Children enclose themselves, instinctively, as completely as food cans. They don’t tell on each other. So, to principals, teachers, parents, I say: assume bullying of all kinds is happening, a lot of it, even if everything seems tranquil on the surface. If you’re proactive in talking to your kids about violence and intimidation—physical and emotional—and how wrong these are, you can make a tremendous difference.