For all its gains in past decades, queer literature has also suffered significant losses. In 2009, Oscar Wilde Bookshop—America’s first LGBT bookstore and a New York City landmark—closed its doors. After 41 years as a champion of gay and lesbian work, Oscar Wilde became another casualty of the stratospheric rise of online booksellers.

Since then, more icons have toppled. A Different Light, a San Francisco institution, put up “everything must go” signs on April 2, 2011. These stores stocked books by independent and university publishers, continual proponents of queer literature.

In their absence, readers will have to seek out the presses that continue to support queer writers. Three recent small press chapbook releases, Radiantly We Inhabit the Air by Christina Hutchins; Sisterhood by Julie Enszer; and the lake has no saint by Stacey Waite explore the purview of queer literature, each offering a unique view of sexuality in art. With their varied perspectives, these three poets enrich literary discourse inside and outside of sexual orientation.

Hutchins marvels at the musicality of language. For example, “Between the Pages of Our Dictionary,” exposes the arias hidden in dry definitions: “Lift away lurk and let lowbrow breathe… / Language has lingered into slow scents.” The dictionary’s alphabetical nature makes it a fitting vehicle for Hutchins’s masterful alliteration.

“Being Read” then expands the scope of her linguistic realm; the poem ennobles the act of reading, applying it to many facets of life. “We aren’t the only readers,” Hutchins writes, “Packed sands memorize undulating shapes of the sea; / grasses spell out a grainy sun.”

Not only does Hutchins see literature in her surroundings, she also derives melodies from similarly diverse sources. “In the Music with Anna” relates everyday objects (“Coke bottle flute / beer bottle flute”) to the speaker’s passionate romance, fusing them with sensual descriptions and musical language. Sex and symphonies collide as “the lip the lip slow presses / the valve and circular breathing / sustains the gleaming note.” Bottles become flutes become her lover’s body. Though Hutchins never directly addresses sexual orientation, she uses a lesbian relationship to frame the interconnectivity of art and life.

These linkages culminate in a network of reciprocal relationships. In the collection’s final poem, “Turnstile,” the speaker revels in the beauty around her, “pressing back against the pressing / sun.” Eager to partake of all of life’s small joys, she thinks, “Radiantly, we inhabit / the air that so briefly, darkly, inhabits us.” Hutchins conducts an exquisite celebration of our world—of the subtle ties that bind us together. “There is so much ardor / under ink,” Hutchins observes, and few will doubt the passion under hers. 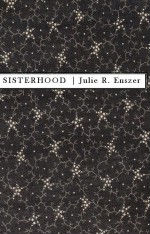 Whereas Hutchins drafts symphonies from manifold topics, Julie Enszer (Handmade Love) riffs expertly on a single, heartfelt note. Another release from Seven Kitchens, Sisterhood follows a speaker coping with the death of her sister, Lara.

The body of the collection consists of twelve poems, bookended by a prologue and an epilogue. Enszer structures each poem around a specific recollection. Through these, she captures the strange and protean forms of memory and mourning.

For example, in “Washer,” the speaker laments the conversations the sisters never had: “I never asked/ how she saved for her machine, / how she moved it to each new apartment.” Though Enszer admits “I’ve loved many women / more than my sister,” she now sees Lara in laundry and drainpipes—in life’s small particulars.

At times the trivial or absurd inspires a dark humor. In “Retainer,” Enszer “make[s] a joke graveside. / Pity, her dying so young. / If you had known, / would you have paid / to have her teeth straightened?” She can only confront these thoughts by acknowledging their borderline absurdity. Attempted levity continues in “Myelomas,” when Lara’s ex-husband falls ill: “I make morbid jokes,” she confesses, “My sister, had she not died, / would be a widow, had they not divorced, / and left with young children, / had he not had a vasectomy.” These comic lines gesture towards the poet’s masked emotion—an entanglement of grief she can only address indirectly.

Enszer abandons her defensive humor in the collection’s final poem. At last she confronts the larger—still unexpected—aspects of her life over which her sister holds sway. Like Hutchins, Enszer includes her lesbian sexuality only as context for a greater theme.

you have never
met my wife and
will not see the thirteen
red roses I’ll bring home tonight—
one for each year of our shared life.
Deep red for passion.
Dark, almost black,
for grief.

Enszer employs sexual orientation as a medium for her discussion of her sister. The significance of Enszer’s marriage and anniversary—the passion contained in thirteen years—staggers beneath the weight of Lara’s memory. The contrast of this otherwise joyous moment evinces the severity of her suffering. 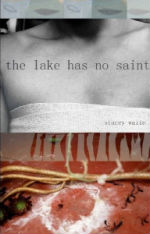 Unlike Hutchins and Enszer, Stacey Waite (Choke, Love Poem to Androgyny) centers her poetic lens directly on sexual identity. The most experimental of these three selections, the lake has no saint incorporates both prose and lineated poetry, using its kaleidoscopic form to reflect the poet’s understanding of gender.

Waite destabilizes her readers by depriving them of familiar linguistic landmarks. She forgoes standard punctuation, blurring the distinction between sentences and fragments. She asks readers to apply that same fluidity of understanding to the delineations of gender. She questions the gendered icons on bathroom doors—“the stick figure triangle skirt that indicated the path we were to take, the ways we were to interpret our bodies.”

Honest and unapologetic, Waite unveils a character whose sense of self eludes conventional definition, whose identity manifests in the mutability of Waite’s unfettered language.

The lake has no saint contains distinct threads in which the speaker reconciles with her sexuality and reflects on a past romance. The two intertwine to create a fully-dimensional, complex protagonist. In “when saying but i was not the kind of boy either,” Waite explores gender identity through courtship: “i would not take her there among the feed and shit because i was not the kind of boy either who keeps for himself. this is the woman who can not carry her body. she swallows the bindings of books, this bandaging.” Interchanging pronouns and gendered markers, Waite forces her readers to reexamine the passage, to navigate the hazed borders between genders with the same disorientation as her speaker.

Even without a narrative arc, this character evolves throughout the collection. She grows from the troubled child still “learning to be a boy” into a more stable adult. While the book’s early poems grapple with identity, the later passages concentrate on a redemptive relationship. With her lover, the speaker grows to embrace her sexuality, and this inner stillness appears in the simple tempo of her statements: “some days we just have lunch. she buys me a sweater. cut hair. the diligent day errands.” In “when bearing the burden of this sound,” the frenetic beat of Waite’s prose poetry gives way to slower, lineated pacing: “we keep quiet in the small room / your body leaning into my jawbone.” After accepting her queer identity, the speaker settles into the comfort of the everyday—the soothing rhythm of a shared life.

Much of the gay experience still begs for expression—for poets like Waite to invent a language for queer identity when conventional terms fail. Equally significant, poets such as Hutchins and Enszer intone the subtler influences of sexuality. The dialogue created by these varied accounts—those that foreground sexuality and those that use it as groundwork for other themes—furthers existing discourse.

Emerging from a history of silence and censure, LGBT writers cannot afford another period of forced reticence. The decline of gay bookstores endangers more than book sales. Shops such as Oscar Wilde and A Different Light served as places of gathering; they built and sustained communities. Without these social forums, the queer community must create new ones. They must look to literature to inspire conversation, and support these small presses, who give voice to the long-silenced.
——
Radiantly We Inhabit the Air
By Christina Hutchins
Seven Kitchens Press
Paperback, 9780982939635, 29pp.
January 2011

V. Jo Hsu is an M.F.A. candidate at Pennsylvania State University, where she also teaches. She has reviews forthcoming in Pleiades and Green Mountains Review. She is the former fiction editor of The Rice Review and has worked for Our Stories Literary Journal and Foundry Literary + Media in New York City.