These stories are truly some of the best, romance or not.  You’ll finish each one, thinking, “This one’s my favorite!” until you realize that you’ve thought that about every single story in the collection.

Perhaps the only romance trope missing from this collection is the historical romance, although the collection kicks off with a story that reads like a Victorian, complete with Scottish manor lord.  Anthony McDonald’s “One Funeral And…” is charmingly English and simply romantic, with one of the collection’s most dreamy happily ever afters.

“Liberty!  Fraternity!  Sexuality!” by Tyler Keevil turns the tables on the stereotype of the fey boy panting after the football hero and also makes a subtle plea of respect for genre fiction.

“Pillion” by Jay Mandal made me want more from the story, but not because I was dissatisfied by what Mandal does give.  This curious story of assault and battery romance flirts with a titillating S/M sexuality and leaves us wondering what was going through the mind of our romantic hero Pip while he watched Adam get beaten up—and what was this classical musician doing hanging out with a bunch of pub brawlers in the first place?  When Pip takes the semi-conscious Adam home to nurse him, the author introduces an interesting suggestion of Stockholm syndrome.  The subtle title perfectly suggests these tensions. 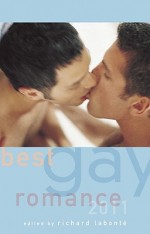 David May gives a master’s lesson in how to use dialect and foreign idioms effectively in “The Red Malo (A Postmodern Island Romance).”  Throughout this story of Hawai’ian romance that manages to introduce both futuristic and primitive visions of a near tomorrow in a highly believable setting, May uses pidgin dialect and Hawai’ian terms in contexts that make them fully intelligible even to those of us who are ignorant of both.

Although he helpfully provides a glossary of terms at the end of the story, it is scarcely needed. I actually approached it with some trepidation, afraid that it would be pedantic and condescending, but May manages to make even these dictionary definitions an affecting part of his romance, so that reading them is like looking at postcards of your Hawai’ian honeymoon.

Labonté’s inclusion of “Fool’s Mate” by Shanna Germain shows editorial courage, since there is some controversy among gay men over whether women can write believable gay men’s romance.  Veteran gay writer Victor J. Bannis has forcefully stated that the writing should stand on its own merits, who cares the sex of the author. Germain’s story proves Bannis’ point.  Convincingly masculine, with a quietly sexy undertone, this story of a boy’s discovery of man/man love is deeply moving and was definitely something of a turn on for this gay man.

When I read “First Roach Pond” by Martin Delacroix, I thought, “Delacroix is not a Catholic.” If he were, his story’s romantic object of pursuit, Gordon Noyle, would not have found such a guilt-free happily ever after. Yet, Gordon’s off-putting double-dealing with romantic pursuer James Beauregard, exactly captures the divided heart of the closeted gay man. Gordon’s duplicity could have soured Beauregard’s attraction (and ours), except Delacroix softens Beauregard’s heart (and ours) by having Gordon whisper, “Beau-Beau” in his ear. Endearing.

I’m not a romantic comedy fan, but “Baxter’s SAPFU” by David Holly is consistently amusing and has three LOL moments before finishing with a satisfying happily ever after and a chuckle. Ole’ time religion meets fundamentalism in this send-up of religious hypocrisy. Plus Holly gives us a really nice vision of our romantic hero’s bubble butt in a swimsuit with a rear seam.

Labonté knows how to pace it when he follows Holly’s excellent comedy with something heavier and darker from Simon Sheppard, “Last Call at the Raven.” This ghostly story revives memories of bars past.  Just when you think this supernatural tale has pulled all its punches, Sheppard knocks the air out of you again. This short short story demands rereading to relish the foreshadowing that haunts Sheppard’s text, beginning with the title.

I’m glad Labonté includes a holiday romance in this collection, since that is a peculiarly unique trope of the romance genre. “Away in the Manger” by Tom Mendicino—the talented author of the acclaimed novel Probation—expands holiday romance way past genre writing into literature.

When New York publisher James is snowed in on Christmas Eve on his way home to visit his folks in West Virginia, he meets the young barkeep Jason at a highway roadhouse. Mendicino’s description of Jason made me immediately think of James Durbin, the adorkable Torrente’s afflicted contestant on this season’s “American Idol”—gawky and endearing:

“[Jason] smiled and strummed a few open chords as he sang the familiar lyrics [to Elvis’ Blue Christmas]. He didn’t try any humorous attempt at Elvis-like vocal pyrotechnics, no campy gulps and throbs. His simple, sincere voice, direct and unaffected, was steeped in the all-too-familiar soul-crushing loneliness of a boy who feared he’d never be loved.”

A paragraph like that can break your heart.  Likewise:

He turned to survey the horizon, range after range of the ancient Alleghenies still visible in the dying light, carpeted with hibernating hardwoods waiting, as ever, to blossom again in the spring. Snow was blowing in from the north and the sun finally expired in the last gasp of bright violet streaks that trailed beyond the farthest visible mountain ridge. I thought for a moment he was crying but realized it was only snowflakes melting on his broad cheeks.  “It is pretty, isn’t it?” he asked.

It certainly is.  Mendicino has the power to move us beyond the formulaic happily ever after to see that “There’s going to be a lot of heartache before this is all over.” In the final paragraph he evokes the mystery and longing of Frost’s “Stopping by the Woods on a Snowy Evening”—the miles to go before the end of one’s journey.

Meringue is pretty fluff, but it sure isn’t easy to make. “Porcu Meu” by Derrick Della Giorgia is such a charming confection that one could overlook the mastery underneath—he makes it look so easy. This light story of butcher boy romance set in Southern Italy is surprisingly meaty.

“You’re a Dog” by Edward Moreno is truly my favorite in the collection, simply because Moreno gives us a romantic protagonist who isn’t Ken Doll pretty and romance that isn’t all XOXOXO on the bottom of a scented envelope.

Susie Bright has observed that we experience the full range of our human emotions through sex, not just the “nice” feelings, and this knock out punch of a story likes its romance rough. Unfortunately, I couldn’t find any online references to Moreno or his work—Readers, can you help?  I want to read more by this guy!

“July 2002” by Jameson Currier will leave you wanting more, which is good because more is available; the story is an excerpt from Currier’s new novel The Third Buddha. The story opens with Ted, the unsentimental protagonist, announcing, “I’m not convinced two men can have an honest relationship.”

Ted’s deadpan observations of his friends’ relationship are amusing, bordering on the cynical (I was reminded of the Dr. Lance Sweets character played by John Francis Daley on “Bones”). But Currier does not allow Ted’s disenchanted viewpoint to wallow in bitterness, despite the disappointment he faces:

“I mentally reprimanded myself for pushing myself so emotionally into the sex and for stepping into what I really knew was to be another one-night stand…I felt the hurt and disappointment of it before he had even left the apartment.”

Ted’s impromptu date, Sam, relates a love story within the story that suggests that both men will not give up on their search for love despite the difficulties that each will face in finding it.

Eric Nguyen manages to evoke something larger than the typical unbosoming of teenaged boys in his coming out tale, “How Boys Flirt with Other Boys.” Nguyen’s protagonist Billy wonders, “How do boys flirt?” and Nguyen flawlessly captures the awkward thrill of such a flirtation between two boys at senior prom.

Since boys’ coming out stories are usually written by adult men, there is a tendency to get those cherries popped faster than believable, at least from my own teenage memories. The delicate interactions of Nguyen’s teen boys, Billy and Robby, suggest momentous self-discoveries through something as chaste as a kiss on the cheek: “This is when I first knew…” That one innocent kiss has a greater romantic charge than any amount of more adult-like grappling.

The one tiny bleat I might sound against this marvelous collection is that the Canadian Labonté has limited his selection to English-language writers, though to his credit they are international in scope. I hope that he might consider editing a collection of romance in translation. Or does the romance genre even cross language cultures? That would be an interesting discovery to make.
——
Best Gay Romance 2011
edited by Richard Labonte
Cleis Press
Paperback, 9781573444286, 232pp.
January 2011