“He has his feelers out. His antennae are raw.”

Paul Lisicky is the author of Lawnboy,a novel, and Famous Builder, a memoir. He has received awards from the National Endowment for the Arts, the James Michener/Copernicus Society, the Henfield Foundation, and the Fine Arts Work Center in Provincetown. His new novel, The Burning House, just out from Etruscan Press, is the wise, gorgeous story of a man whose life falls apart when his wife’s sister moves into their house.

SS: The novel’s opening paragraph still sings and surprises me after at least twenty readings.  The book is a whole with an urgent story to tell, yet many individual passages and sentences seem to have the form, insight and radiance to stand alone.  Do you feel tension between the traditional demands of plot and the transcendent quality of any given sentence or moment?

PL: I was lucky enough to come upon a character who’s both interior–he likes to talk--and possessed by a need to get to the bottom of things.  I think that his imagery is just brought on by a state of heightened awareness. He has his feelers out.  His antennae are raw.

SS: Here’s a passage from the book:  I grabbed for her hand; who cared if anyone saw?  I just grabbed it harder, slumping in the seat, pressing my bare arm against hers so I could feel her come in and up through me, candling me.

That “candling me,” describing light from another coming up and inside the speaker, is so gorgeous.   At key moments, the narrator, Isodore, experiences others inside him.  He says, “Keep me in you.”  The story enters other points of view at such moments, as well. I feel led by the book to think about the connection between entering other lives and minds in fiction and the ways people enter each other sexually, emotionally, in daily life through shared physical space, and in memory. How did you think about point of view in writing The Burning House?

PL: Even though he often has a sense of humor, Isidore is pretty broken. I think porosity is a piece with that state.  He feels permeated by the people who are the objects of his attention and affection.  And it goes both ways: at certain points he slips into the minds of other characters as he’s thinking about them. There’s that moment when he’s wondering about the boys who might have lived in that abandoned summerhouse.  Where do we begin and end?  My writing has always been obsessed by that question. 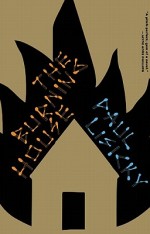 SS: People go inside houses, too, to live, to look, to shelter, to steal.  They are built for profit or cleaned for varied kinds of love. Houses survive human beings.  Living with his wife and her sister in their recently dead mother’s house is at the heart of Isidore’s predicament, and the political struggle over a housing development is central, too. What do you think about the relationship between housing and wildness, in people and in the larger world that includes other creatures, as well?

PL: It’s curious that houses mean so much in the book when the characters spend so much time outside.  That search for shelter feels primal, animal.  And it’s especially acute when the characters are doing what they can to protect what’s left of wildness, as the community around them is being torn up by greed.

SS: Did writing the book teach you anything you didn’t already know about marriage?  Or desire?

PL: I think the book knows more than I do about those things, and I’m honestly still learning from it.  One thing we humans tend to do is fall for an idealized version of our partners, and we can hold fast to that image over time, sometimes at our peril.  At the beginning of the book, Isidore is still haunted by a youthful, romanticized version of his wife.  I wonder whether his fixation on his sister-in-law is part of an unconscious plan to get to know his wife again, as she is right now.

SS: Was it a difficult decision to write a book without central characters who are gay?   How has that aspect of the experience of writing the book been for you?

That said, I hope gay men and women can see aspects of themselves in Isidore.  In different circumstances, he could have been in a relationship with another man.  He’s a very earthy, sexual person, aware of his own body and its power.  And he isn’t afraid of acknowledging sexual attraction and tension between himself and other men.  Maybe he’s bisexual, but he probably wouldn’t call himself that.

SS: What are the differences between composing a song and writing a novel?

PL: I started out as a composer, and over the years the distance between my musical life and my writer life has more or less collapsed.  I think about musical phrases as I put sentences together; I do what I can to approximate harmonic structure on the page.  When musical performance works, it takes on a life of its own.  So how to sustain that sense of transformation and heat over the course of a long prose narrative? That’s what I’ve been trying for.

SS: Do you have other books coming up that you’d like to talk about?

PL: Unbuilt Projects will be out in Fall 2012.  That book is a big collage about the relationship between memory and identity, suggested in part by my late mother’s struggle with dementia.  In addition to that, I just finished a long nonfiction book about friendship that I want to let cool before I put out there.

Some of it is about the late writer Denise Gess, who died in 2009. She was both a mentor and a big sister to me, and it wants to think about a friendship between two writers, a gay man and a straight woman, and how their relationship shifts and grows over the year