“I needed to deal with all the sorrow I felt.”

The author alternates between homes in Stockholm and in Berlin. When my email reached him, he was in “snowy Stockholm.”

WG: Readers are going to want to know, so let me get the question out of the way at once: how much of your novel My Brother and His Brother is autobiographical?

HL: I guess most stories have segments or parts that are more or less autobiographical, and that is the case with My Brother and His Brother, but it’s really just segments and parts. I had an uncle who died at 14, years before I was born, and I grew up with stories about him. He became some kind of half-imaginary friend to me. We were really close at times.

Years later, when my boyfriend died, I needed to deal with all the sorrow I felt. I kind of mixed my childhood memories of my uncle and the sorrow surrounding his death with my own sorrow and grief of having lost my closest friend and lover and used that while writing My Brother and His Brother. At first, I looked upon the novel as a comfort story for myself.

WG: Without giving away the ending of the novel, could you tell us what you think happens to Jonas after his school year is over? In particular, I wonder what will happen to him sexually as a result of his discoveries. 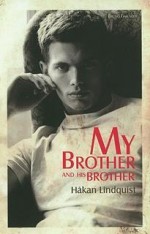 HL: I leave it to the reader to decide about Jonas and his sexual preferences. There are, perhaps, hints in the novel. Jonas obviously gets excited here and there while learning more about his brother and his brother’s sexual experiences…. There are connections between all my novels. One main character in one story may turn up as a side figure in another one. So, perhaps I’ll get back to Jonas some day in another story.

WG: Looking at your webpage and its description of all your novels, I notice that a recurring plot is a love story between two males from different nationalities. What is the personal significance for you?

HL: I have always been interested in other languages and other cultures. At the time when My Brother and His Brother was first published in Sweden, there was a rather strong extreme right-wing movement in Scandinavia with an outspoken xenophobia. I thought perhaps I could help effect some change — even the smallest change — through my writing without really being a political writer, and so I decided to let at least one of the main characters of each novel be a foreigner or someone with a foreign origin.

WG: Having lived in Denmark for a year, I am aware how at home most Scandinavians are in English. But what led you to decide to translate the novel yourself?

HL: I started translating my first novel just for fun, between other works. First I just made a draft translation, which I thought could be used when I wanted to get in touch with foreign publishers. But I got back to the translation every now and then, editing and improving it. And then Glenn Rounds, an American friend of mine in Stockholm who used to work as an editor in New York for many years, offered to check my translation.

WG: From Yossarian in Catch-22 on, I think many Americans idealize Sweden and see it as one of the most progressive countries on earth. Yet I notice that you sense a need to work for the rights of homosexual and bisexual youths. What status do the BGLT communities have currently in Scandinavia?

HL: The situation in general for the BGLT communities in Scandinavia is good, I’d say. The laws have been changed (in steps and through decades) to make the situation better. Sometimes the judiciary has been way ahead of the opinion of people in general, but I have a feeling people are more relaxed/tolerant/open to people who are not straight or people who are not living a straight lifestyle.

Some laws — like the right for same sex couples to adopt a child — look great on paper, but don’t really work that well in practice. Still, in general, the situation in Scandinavia has changed a lot to the better during the past fifteen years (although, of course, the fight for these changes started long before that).