Original Plumbing: From SF to NYC

Original Plumbing: From SF to NYC

When you hold an Original Plumbing zine in your hands, it’s easy to feel the weight of love and sweat that went into its creation. But with its website, video and text blogs, performances, and parties, Original Plumbing is more than a zine — it’s a movement.

OP, which recently printed its 6th issue, features stories, interviews, and photos of FTM and trans men from all walks of life.  Original Plumbing has been compared to queer culture rags like BUTT for gay men, and GLU for women.  Even as it’s become the premiere trans-male publication in the US, OP’s jagged, DIY edges can be seen in its staple-bound pages, bright tone, and offbeat attitude.  OP is racy, intelligent, and has a goofy, enchanting sense of humor.

OP creators Amos Mac and Rocco Kayiatos run this multimedia operation in San Francisco.  Since it’s first issue launched in Fall 2009 (which profiled the bedrooms and living spaces of several trans guys), Original Plumbing has gained a significant following of subscribers in the US and abroad. 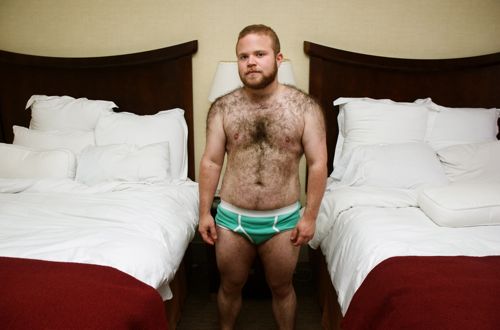 Each issue covers a theme relevant to various experiences amongst FTMs and transmen.  Past themes have included fashion, body hair, work and employment, and health and safer sex.  The print zine and the website both provide information for folks looking for community, bars, safer sex advice, and other FTM-related events and stories.

In an interview, Amos Mac, photographer and editor in chief of OP, says they try to include the experiences and stories of trans men from a range of geographical locations, cultural, racial, and economic backgrounds.  OP also spotlights trans men across the gender and sexuality spectrum including an array of identifications and gender presentations, some who use hormones and other who don’t, as well as non, pre, and post-op guys.  The quarterly thus serves to document and showcase the culture and diversity of the trans-masculine community.

Yet within the pages of OP, one finds many transmen ages 20-35, tattooed, with plenty of quirk and pop-style.  Often models and contributors hail from big cities, especially in New York and California.  Occasionally, OP profiles transmen living in smaller cities outside the coastal queer hotspots.  But it’s not surprising that most OP participants are located in big cities due to the high population of trans and queer folks in these places.  And as a DIY effort, creators of OP are bound by time and funding constraints.

One might imagine that as OP expands their subscriber base and distributes more widely, the diversity of participants will also increase and come out to participate in this unique chronicle of trans-masculine culture. 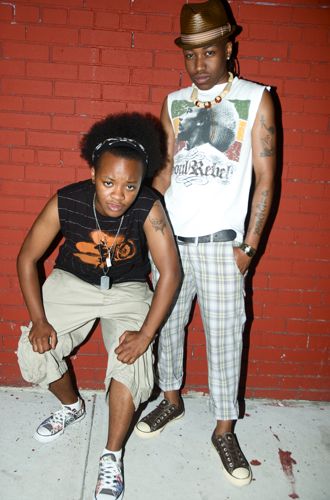 In addition to its documentation, OP also serves as a banner for the often-excluded “T” of the LGBTQ alphabet soup.  “We’re definitely trying to give ourselves a voice and we’re trying to give these people in the magazine a voice… trying to get as much diversity and different experiences as possible,” Mac says. 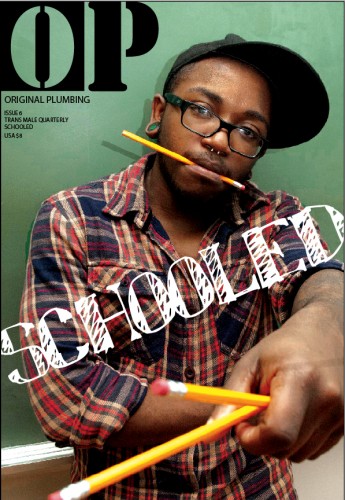 He does shoots and interviews both in San Francisco and while traveling, and is constantly collecting material for future issues.  While there is never a dearth of material, Mac notes that because the magazine is photo and interview-based, the content often depends on “who is willing to share what information and who is willing to be up front and wants to be out.” 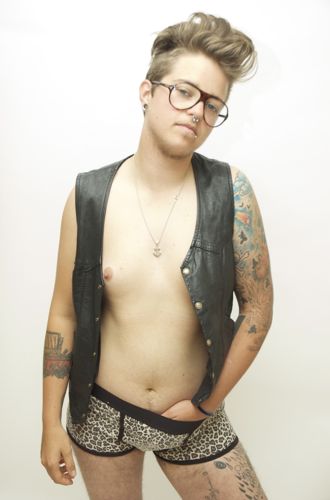 “There are plenty of stories out there where people wouldn’t want to share, wouldn’t want to have their face to their name.”  Yet still, Mac says, “I’m always surprised by who comes out of the woodwork and who wants to share a story.”

The trans-masculine community as we know it today has largely been built through online networks.  This is one important reason why OP cannot exist only on the screen.  In an interview with writer Johnny Murdoc, Mac says,

“I want it [OP] to take up space and for people to be able to rip out a page and hang it on their wall. I want it to be in a dusty box in the GLBT archives in 100 years. The internet houses information about Original Plumbing and promotes its existence and for that I am truly grateful, but having it be web-based only would never make me feel the way I do when I have a finished product in my hands or see it on a shelf.”

There is no shortage of excitement about this publication, which crosses uncharted territory in FTM trans, literary, and art scenes.  Original Plumbing is made by and for trans masculine folks, and celebrates this sorely overlooked and underrepresented queer group. 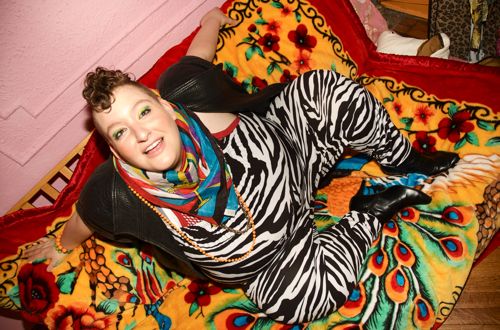 Original Plumbing is available at bookstores across the US, Australia, Germany, and Canada.  Subscriptions, OP swag, and information about modeling or writing submissions are available at www.originalplumbing.com.

2013 Over the Rainbow List: 84 LGBT Books for Adult Readers
William Johnson: Lambda's New Managing Editor
'Two Augusts in a Row in a Row' by Shelley Marlow