John Gruber (b.1928), the last surviving member of the original Mattachine Society, died peacefully at his home in Santa Clara on Monday.

The Mattachine Society, often referred to as the first successful gay rights organization in the United States (a group called the Society for Human Rights was founded in Chicago in 1924 but folded the following year), was formed in Los Angeles in 1950 by Harry Hay along with his lover Rudi Gernreich and other founding members Dale Jennings, Bob Hull, Chuck Rowland, Konrad Stevens, and Stevens’ then-boyfriend John Gruber.

Initially, due to laws prohibiting homosexuals from gathering in public and private spaces, the group met under strict anonymity, using pseudonyms even with each other.

In Eric Slade’s 2001 film Hope Along the Wind: The Life of Harry Hay, Gruber discussed the Mattachine Society’s first public act: in February 1952, after Jennings was arrested by an undercover police officer in a Los Angeles park and charged with lewd behavior, the group launched a successful defense, at a time when most homosexuals entrapped by police simply pled guilty and quietly paid the fine. “In those days if you were a homosexual,” Gruber said, “it was your problem and you knew it.”

Although Gruber’s initial attraction to the Mattachine Society was social, camaraderie quickly evolved into loyalty and political consciousness. In an unpublished interview with Slade from 2000, Gruber described his introduction to the group:

I really didn’t think of myself as a homosexual man.  I thought of myself as a guy in college, an ex-Marine….  I wouldn’t have called it group therapy in those days, but that’s really what I meant, a kind of family, a family that I never had at home, a family that accepted me, and that … was a brand new thing to me.

Gruber and the other Mattachine members, in order to garner financial support to hire a defense for Jennings, adopted the name “Citizens Committee to Outlaw Entrapment” and began distributing flyers excoriating the Los Angeles Police Department for its longstanding practice of homosexual harassment, in the process attracting volunteers and swelling attendance at the society’s meetings.

However, the strength that comes with numbers came at a personal price to Gruber, as he explained to Slade: “The new people who came in were… very much… mainstream and… nonpolitical… But everybody loves a winner and we were winners at that point, and they joined us.”

As the Mattachine Society grew, the new members became worried about the leftist political causes, including Communism, advocated by Hay, Gruber, and other founding members. Due to these differences, all the founding members, including Gruber, resigned in 1953. 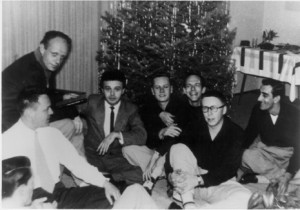 By the mid-1950s, the Mattachine Society had grown into a national movement, finally supplanted by a host of direct-action antiassimilationist groups that sprung up in the wake of the Stonewall Riots of June, 1969.

Of the original members, Jennings (who died in 2000) and Hay (who died in 2002) are best known today. In 1953 Jennings cofounded the gay political organization One, Inc. in Los Angeles, publisher of the seminal One Magazine; he also authored several novels. Hay went on to cofound the countercultural Radical Faeries in 1979, a group still going strong today with branches throughout North America, as well as in Europe and Asia.

Despite his unsung status, Gruber’s role as one of the founding fathers of the modern gay movement cannot be overstated. By helping to write and distribute some of Mattachine’s earliest literature in order to publicize Jenning’s entrapment case, Gruber not only helped secure one man’s release from jail, but also contributed to a burgeoning public awareness of homosexuality and antigay discrimination, the ripple effects of which are felt even today in issues ranging from marriage equality and youth suicide to Don’t Ask, Don’t Tell.

Gay historian Stuart Timmons, who interviewed Gruber for his books The Trouble with Harry Hay (Alyson) and Gay LA (Basic Books), said, “I will always remember John fondly, as the self-described gargoyle on the cathedral of the Mattachine, no pushover. He was a sweet and generous man.”

Where are Joe Buck and Ratso Rizzo?
Tom Spanbauer: Truth Through Fiction
Watch This! The Film Trailer for 'The Miseducation of Cameron Post'

Brent Calderwood is the author of the poetry collection The God of Longing (Sibling Rivalry Press, 2014) and Literary Editor for A&U Magazine. He lives in San Francisco. His website is www.brentcalderwood.com.