Dunstan Thompson and the End of Love

Dunstan Thompson and the End of Love

Rescued from the Annals of Literary Obscurity

If Dunstan Thompson had died young, a few more people might recognize his name today. I’d like to think I might have pulled one of his early books—Poems (1943) or Lament for the Sleepwalker (1947)—from a dusty library shelf in my teen years, when, eager to understand my gay poetic heritage, I first fell in love with the work of iconic writers like Walt Whitman, W.H. Auden, and Frank O’Hara.

But it wasn’t until reading Dunstan Thompson: On the Life & Work of a Lost American Master, edited by D.A. Powell and Kevin Prufer (Pleiades Press), that I’d ever heard of the one-time literary celebrity.

Born in 1918 to pair of devout Catholics in New London, Connecticut, Thompson grew up in Washington, DC, and Annapolis, Maryland, later going on to study English Literature at Harvard. Just shy of graduating, Thompson left the school, apparently disappointed (and unimpressed) by the department. He was, by all accounts, a confident man, though he seems, in the poems and critical essays collected here, to have struggled throughout his life with his own strong sense of disillusionment.

A lover of history, he idolized Keats’ life and work, constantly rereading his letters but always saving the last few for next time, avoiding the pain of ever finishing. He looked forward to the past. And though his exit from the world was quieter than Keats’, it proved just as tragic. 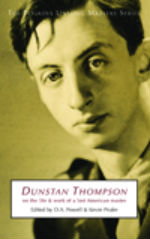 The early poems are fantastic — almost uniformly homoerotic, both subtle and bold in turn, often sad (“Death is a soldier and afraid/ like you. If he could talk, he’d tell/ the world how he was hurt.”) Both Poems and Lament for the Sleepwalker received favorable reviews from a number of publications, including Poetry (though Thompson had derided the magazine in Vice-Versa, his own short-lived literary journal).

The self-indulgence of which The Nation accuses him is certainly evident in his sometimes heavy-handed conceits, but the “private symbols” (could the reviewer have meant queer?) and unceasingly self-aware wit strike me as incredibly modern. Thompson, a proud formalist, knows when he is being clever.

Images and metaphors involving war, violence, and death dominate these poems, likely inspired by Thompson’s experiences in the armed forces during World War II and certainly contributing to his reputation as an important war poet (though he never faced combat and perhaps played up the role of the effete intellectual to his advantage while in the service).

The poems from this period are passionate in the true sense of the word, though they take some pleasure in their suffering. In the strange, sexually charged sonnet “This Loneliness for You Is Like the Wound,” a general offers “a diffident embarrassed kiss” to a soldier on his deathbed. Here, and elsewhere in the verse that brought Thompson to fame as a young man, thanatos and eros might be confused for one another.

The later works, drawn from Poems: 1950-1974 (also called The Red Book), make up the bulk of the selected poems and are a different story altogether: stiff, leveled, and impersonal, they seem a strange departure from his former sensibility. His nine-part, twenty-page ode to Mary Magdalen, in particular, flounders, his sometimes overwrought quality acquiring an uncomfortable moral center and losing much of its charm.

The many voices in this book—of scholars, other writers, friends and acquaintances of Thompson—are mostly in agreement: the good stuff is in the first two works, while The Red Book is flaccid in comparison (in her essay, Katie Ford aptly and more kindly describes the later poems as “liturgical”). One man, however, stands in especially staunch opposition to these critics. His name is Philip Trower and he is Thompson’s literary executor, former lover, and lifelong companion.

The story of The Red Book is as much Trower’s as it is Thompson’s, really, beginning when the two were introduced by a mutual friend in 1945 and became lovers. Though they lived together until Thompson’s death in 1975, both experienced “religious awakenings” in 1952 and maintained a platonic (or at least unphysical) relationship for the rest of their years together.

With his return to Catholicism, Thompson’s work underwent an abrupt change in subject and style, the daring eroticism gone, the distinct voice flattened. Though he continued to write prolifically throughout his life, his reignited sense of religious obligation spelled the end of his literary stardom. His poems stopped being accepted for publication, only a few new ones finding their way into print. In the house he and Trower shared on the English seaside, Dunstan Thompson retreated into the annals of literary obscurity a changed man.

I’m a young, gay writer, and because of this, I want history to remember Dunstan Thompson a certain way—not, in this case, the way he wanted. I prefer the image of him swishing about some upscale Manhattan cocktail party, rubbing elbows with T.S. Eliot and whomever else he was eager to impress, drinking a little too much and flirting with the cutest boy in the place.

It pains me to think of this brilliant, groundbreaking poet grown old and irrelevant, cloistered in a cottage by the sea and denying himself physical intimacy with the man he’d loved for thirty years. It breaks my heart, too, that he insisted Trower never allow his first two books to be republished, that he wanted, more than anything, for The Red Book to be remembered as his one truly important literary contribution.

Trower’s loyalty to his long-time companion is unshakeable; in the interviews and essay collected here he campaigns tirelessly for the superiority of the later poems and returns, again and again, to Thompson’s profound faith. But Trower’s words also reveal his incredible respect for his dearest friend—how much he admired Thompson’s mind is obvious—as well as the depth of his love. His insistent focus on The Red Book is an attempt to fulfill Thompson’s last wishes as a writer and, more significantly, a way of honoring a man he cared for deeply.

In my further research for this piece, I came across Poetry’s 1947 review of Lament for the Sleepwalker and discovered this passage, quoted from the last poem of the book. It strikes me as uncannily resonant in a discussion of Thompson’s life:

The end of love is that the heart is still
As the rose on wind distresses, still as light
On the unmoved grace, or the humming bird
Poised the pure moment by an act of will.

The end of love did not scare Thompson; rather, he embraced it as a thing of beauty. Perhaps feeling that he’d gone far enough in the direction of modernity, he returned to the church seeking the impossible stillness of his humming bird.

Image from a portrait of Thompson by Alfonso A. Ossorio. Courtesy artasiamerica.

'Dunstan Thompson' ed. by D.A. Powell and Kevin Prufer
Michelle Theall: On God, Faith, and the Complications of Writing About Family
May We Present... Nicholas Wong's Besiege Me