David Levithan: One Word at a Time

David Levithan: One Word at a Time

David Levithan has really outdone himself this time.  His new book, The Lover’s Dictionary (Farrar Straus and Giroux), is his first work of fiction for adults. Told as a series of dictionary entries over a two year relationship, Levithan’s story covers the honeymoon period, one spouse’s addiction, and the kind of betrayal that leaves us wondering if love ever feels like home.

I confess that I read this book three times in a week.  The first time was for the story. During the second reading, I concentrated on the words defined, and the third time I read The Lover’s Dictionary because I just missed the characters and wanted to see how they were holding up. Creepy, I know.

If you’ve ever been in love, or were looking for a reason to try it (or avoid it), you’ve got to read The Lover’s Dictionary. I chatted with David Levithan recently, and he revealed a huge mystery about one of the characters. Enjoy.

SH: My intense affection for this book can be identified with the definition you chose for the word “posterity.” A couples therapist once said to me, “You two should be bringing out the best in each other, not the worst,” but it wasn’t until I read under this entry in The Lover’s Dictionary: “When I die, your memories of me will be my greatest accomplishment,” that this concept made sense to me.  What a beautiful statement. In your life, when did this way of loving dawn on you?

DL: I can’t say there was any particular point of revelation.  The easy, and probably truest, answer is that I have amazing parents who’ve certainly taught me a lot by example.  I may never be able to write a great, painful memoir about my youth, because they made it great and not particularly painful, but they’ve very much got me on the right track when it comes to thinking about relationships.

SH: Are they still together? 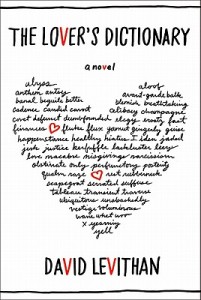 SH: You have said that you were inspired to write this book as one of your annual Valentine’s Day stories for friends, but I’ve never heard a Valentine’s Day story with this kind of depth to it, this much pain—and maybe pain isn’t the right word, because it’s a very funny story at times also. Maybe the word is insight? I mean, it’s not exactly a “roses are red” poem.

DL: Well, the Valentine’s Day Story doesn’t really have to fit into any particular conventions of Valentine’s Day.  I write stories about love, not necessarily love stories.  And, honestly, I think much of the beauty in relationships comes from overcoming the myriad challenges that are thrown your way.  The Hallmark-funded sentiment of Valentine’s Day is about as accurate a representation of love as a construction-paper heart is of a real heart. I’m more interested in the real heart.

SH: I can remember being in a relationship and being terrified of leaving the house out of fear that he might cheat on me, so I loved the definition in the book for “corrode.” Does a relationship rust when we leave the window open?

DL: Not always, but sometimes.  And you have to decide how much rust you can take. A little rust isn’t going to make it fall apart. But if every time you look at it, all you can see is the rust, then you have a problem.

SH: Do gay relationships require more tolerance of rust? They must, right?

DL: I don’t see why they would or wouldn’t.  I think it purely depends on the people involved.

DL: When I do it, it’s out of a desire for a clear-cut answer in a situation that’s laced with ambiguity.  But, again, the provocation rarely gets the desired effect.  Sometimes because there’s no way to actually express what one is thinking.  And sometimes because the other person doesn’t want to tell, and that in itself becomes another silence in the room.

SH: It seems to me that you personally, David, would always be able to express what you’re thinking, based on how sensitive and insightful your characters are. Do you ever find yourself afraid or at a loss for expression of how you feel in your own relationships?

SH: What’s so compelling about The Lover’s Dictionary is that while it’s told in alphabetical order, just like a dictionary, the story is not. I kept turning the page to find out what was going to happen, only to find a new layer of the past that I didn’t know between these two characters. Is that how you discovered the story as well?

DL: Yes.  I wrote it in alphabetical order, jumping back and forth in time.  I didn’t intend it when I started, but soon I realized that this is a pretty accurate reflection of how we recall relationships.  You don’t start at the beginning and end at the ending, especially if you’ve been together for two years.  Instead, it comes out as a collection of remembered moments and themes—some connected, some not.  “Remember that time that we…and that other time we…and oh God I was mad at you when you…but, really, I loved you when…”  And so forth.

SH: Most people have no idea what the genders are of this couple, and frankly, I’m afraid to Google too much about it because I think it would spoil it. But the closest I came to an answer was in your definition of the word “arduous” (as it relates to sex) which seems all too familiar to this gay guy. But then I talked about it with a straight man who read the book, and a lesbian who read the book, and we fought over which gender and orientation it all applies to. As much as I hate to ask, do you care to settle the score just so I…er…one of us can press the button on the other’s back and make it be over with?

DL: There’s no right or wrong answer.  The narrator is male.  The lover he is addressing is whatever gender you want him/her to be.

Sean Hetherington co-founded the international volunteer effort and media phenomenon Day Without a Gay covered in the New York Times, on CNN, and in the Wall Street Journal. Appeared as a weight loss survivor success story on NBC's hit American Gladiators (five years after losing 100 pounds). Hetherington lives in West Hollywood with his dogs, Ralph and Cricket where he is a TV development executive.