C. Dale Young practices medicine, serves as poetry editor for New England Review, and teaches in the Warren Wilson MFA Program for Writers.  The author of The Day Underneath the Day (Northwestern) and The Second Person (Four Way Books), his third poetry collection, Torn (Four Way Books) will be released later this month.

RJG: You’re on the record (both on your blog and just in general conversation) as being a “slow” poet—you said on your blog last month that you wrote four poems last year.  I assume you‘re only counting completed poems, right?  Did you have more poems in process last year that went unfinished? Or do you focus on a poem until it’s done?

CDY: I write about four poems per year, and have been doing so for quite a number of years now. I start four and finish four. I rarely throw a poem away, though I have done so many times over the past twenty years. I write slowly because my time is greatly limited by the practice of medicine.

I go months without trying to get something down on paper. Once I do, I keep going back to it. Most of my poems go through as many as 20 or more drafts. I don’t feel the need to always be writing a poem, or maybe that is what I have convinced myself, knowing full well I don’t have such a luxury.

I went to an artists’ colony in 2007 and wrote 14 poems in two weeks.  I also assembled the first draft of what is now the book Torn.  I felt as if I were given some great gift of time because without that stint it would have taken me three and a half years to write that many poems.  Many times I swear I am going to pass the four poem mark, but then the year ends, and that is what I have. 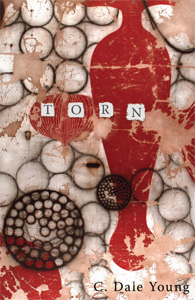 RJG: It’s interesting to think about some of the poems in Torn being written simultaneously, or at least in close proximity, to poems from The Second Person. There are some similarities—but also some important differences. There’s still an engagement with culture (the fine arts, history, theology), the importance of scene and scenery as the site of the poem, and poems addressing someone who isn’t there.

But your method here is different:  the “you” who’s addressed isn’t just a beloved, it’s become the big “You,” God; there’s an approach to some of the poems that’s close to allegory or parable; there’s a more direct approach to desire; and there’s a strong sense of the personal. Was there a conscious decision to adjust your approach to poems?

CDY: I never sat down with the intent to adjust the approach in my poems. It must have happened organically.  I know when I first put together Torn that I ran it through a word cloud program and the word “God” was gigantic.  I was floored.  I had to go through and look for God.  And that word was all over the place.

There are two poems in Torn written long before the majority of the other poems in the book. One predates my first book and the other was written around the time I wrote most of the poems in The Second Person. They didn’t fit with either of those books when I assembled them.

In some ways, they were written long before their time. The notion of the beloved and the notion of devotion are things I have had with me since my teenage years. I had them in my head long before I could describe them or even understand them physically.

RJG: The beloved and devotion show up throughout these poems, definitely. But they’re complicated relationships.  Especially the idea of devotion and, most especially, devotion’s practice.  It creates an interesting tension. You have these tightly constructed poems that are contesting with their own content.  Did you have a particular model in mind for how these poems dealt with their own tensions?

CDY: I don’t have a model for how these poems dealt with their tensions. I do know that for five of the eight years I spent writing the majority of the poems in this book I obsessively re-read a lot of Donne’s poems. I was drawn to their complexities of emotion, the ways in which emotion could be restrained or released, the ecstasy of loving a God one could never really know physically but wanted to know physically. Is there anything more homoerotic than reading the ecstatic poets?  There is something deeply sexy about trying to understand why we have been put on this earth.

RJG: Donne’s probably the most physical of the metaphysical poets—it’s all that battering and o’erthrowing. I think he’s also the most nuanced and ambivalent of them in his utterances of faith. Torn is pretty traditionally metaphysical in its concerns and its modes of expression—there’s God, the Devil shows up a couple of times, and there’s fallible Man.  But it’s also a complicated cosmology—God’s not necessarily any more reliable than we are.

CDY: I was shocked when a reviewer called me a metaphysical poet while reviewing my first book. And even now, when I look back, I don’t see it. That this new book has metaphysical concerns, I see that. How can it not? I am endlessly fascinated by the fact the human animal is capable of incredible tenderness and care while in the next moment it is capable of unthinkable brutality. I see this over and over. And I guess I imagine God must also be that way to have created us in His image, a fact theologians typically want to avoid. We are complex things. God is complex. Nothing is ever as simple as it seems. Nothing.

RJG: I’m often struck by your poems’ insistence on precision. There’s a need for particularity—not just when describing something, but when simply speaking.  But there seems to me an equally strong sympathy with more abstract expression.  Is there a particular drama or emotional energy for you in those extremes?

[pullquote]Despite the accuracy and precision, despite the desire to heal and to love, despite the need for human touch, we all fail. We fail miserably.

And in the end, it is what defines us as human: the desire to be good but having to contend with our limitations.”[/pullquote]

CDY: My obsession with precision and accuracy must be deep-seated. For God’s sake, I ended up in the one field of medicine whereby one makes adjustments in millimeters and must be concerned with hitting the same target in exactly the same way day after day. So, my obsessions with precision and accuracy are deep-seated. I can find them in almost every aspect of my life, in almost every job I have, whether as writer, doctor, editor, teacher, etc.  It is both a blessing and a curse.

RJG: Correct me if I’m wrong, but I didn’t notice any obviously formal poems in Torn. But I did notice various forms of repetition.  In several of the poems there’s a repetition of phrases (sometimes with a tweak or minor variation) that’s almost tautological. Did repetition become its own formal strategy as you were working?

CDY: I do have a sestina in the book, though the lines are not iambic. My poem “The Moss Garden” has three six-line stanzas, each with 4 lines of iambic pentameter followed by two of iambic hexameter.  The couplet of hexameter repeats the same end word.

Actually, instead of rhyme in this poem I repeated end words. I first began to obsess about repetition as a means of supplanting rhyme within a metrical poem. But that was a long time ago. I don’t have many metrical poems, though someone recently pointed out to me that a very large number of my lines are pentameter.

But going back to this issue you raise, I have become more and more interested in diction and repetition as ways to convey information in a poem.  I used to assume line was the primary way of parsing information in a poem, but it is only one of the ways. What takes place between the repetitions of words colors how we perceive what is being repeated.

Of course, this may all be in my head, but it is what has helped me move forward, this idea of not only writing out of line but also writing out of syntax, my desire to focus on diction and repetition.

RJG: Reading through the last section it seems that these poems are in conversation with the book’s earlier poems in a deliberate way.  Is that more a matter of how the poems are ordered?

CDY: I am an obsessive-compulsive person by nature, and I cannot help being that way in my poems. I return to things over and over.  In many ways, I would never have a book of poems otherwise. I cannot sit down and decide to write a book of poems on fill-in-the-blank topic. It would never happen.  After 4 or 5 poems, I would lose interest and the book would be dead.  So, I just write poems.

At some point, usually 5-8 years after starting new poems, I sit down and see what I have. With the materials in front of me, I begin to assemble a book. So, that the last section of poems would seem to be in conversation with the first and second sections is both a result of my obsessions and my compulsion to give architecture to the poems as a book.

RJG: I mentioned earlier that I felt a stronger sense of the personal in these poems. And that’s particularly true of the last section—especially because there’s fallibility here, a stance we don’t see too often.  I kept thinking that some of the aesthetic distance has collapsed.  Was this a conscious effort?  Or did this occur as a by-product of the poems?

CDY: I joked with someone years ago that my second book should have been titled The Book of Failure but that a friend warned me it would only attract a certain kind of reviewer to slam it.  In many of the poems in the new book, especially in the final section, I found myself concerned not so much with failure but with fallibility.

Medicine is filled with a desire for perfection and yet, and yet!, perfection is unattainable.  As much as I would like to say my real life doesn’t penetrate the poems, it is impossible for one’s life not to penetrate one’s poems. I told my mother once that the greatest lesson I learned in medical school was learning to fail, being conscious of failure. And it occurs to me now that this has leeched into the poems. Despite the accuracy and precision, despite the desire to heal and to love, despite the need for human touch, we all fail. We fail miserably. And in the end, it is what defines us as human: the desire to be good but having to contend with our limitations.

RJ Gibson holds an MFA from Warren-Wilson College's Program for Writers. In 2008 he was a Poetry Fellow at the Lambda Literary Foundation's Retreat for New and Emerging Writers. His chapbook Scavenge was a co-winner of the 2009 Robin Becker Prize.