‘Shades of Love’ by Dimitris Yeros

‘Shades of Love’ by Dimitris Yeros

Photographs Inspired by the Poems of C.P. Cavafy

Many gay authors and artists hold a special place for the poems of C. P. Cavafy (1863-1933). E.M. Forester, Edward Albee, David Hockney, Duane Michaels, and Edmund White love the gay poet—openly gay before coming out was even “coming out.”

With Shades of Love (Insight Editions), photographer Dimitris Yeros adds himself to the list of serious Cavafy fans. The oversize book is a collection of Cavafy poems and Yeros’s mostly homoerotic photographs. There are some wonderful portraits, many of the gay artists who have loved Cavafy’s poetry.

A few of Yeros’s pictures contain as much mystery and intimacy as Cavafy’s poems. And although Cavafy has a reputation for being difficult to translate, a few of his simplest poems reveal themselves as potent bundles of emotion. When these few gems end up sharing a spread (each spread in the book contains one poem and one photograph) the result is quite wonderful.

Unfortunately, this rarely happens. Most of the photos are banal, black-and-white cheesecake; the stuff you’ve seen on gay greeting cards in the early 90s. Also, unfortunately, the difficulty translating Cavafy’s poems is clear. The samples here are new versions by David Connolly, a professor in Greece. But clearly, and very often, something has been lost in translation.

But lets look on the bright side, because there are several winning combinations of photo and poem. Let’s start with page 62-63. The poem is called: “To Sensual Pleasure.” In four lines Cavafy describes the exhilaration of gay sex. He calls it  “the sensual pleasures I preferred.”

He rejects mainstream heterosexuality with another line: “I loathed all enjoyment of commonplace loves.”

To accompany this poem, Yeros chose one of his least explicit photographs, yet one that exudes real mystery. Three naked men sit or stand in an average-looking home. They don’t act turned-on, like so many other models in the book.

In fact, they don’t seem to be acting at all, which is refreshing. Too many of Yeros’ photos include handsome men acting aggravated or hypnotized. Here the main seated figure is David Leddick, author, gay art historian and photography collector. His head rests on his hand comfortably. He looks his age, about 50, and reveals his naked body confidently, which is quite simply: sexy. He knows, and so do we, that the body is beautiful if you believe it is. 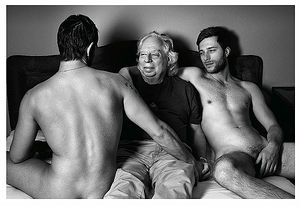 Behind Leddick, a younger man with brown hair leans seductively into the frame. He supports himself on a table behind Leddick. We only see his chest and handsome face. Further back and behind the table, stands another man, blond, slightly more muscular. The blond stands with great ease. His hands hang down by his sides. His penis is framed between the limbs of the man in the middle and the table. But it’s not obvious; his penis is a detail for the viewer to discover.

Who are these men? The title says “David Leddick with Daron and Michael.” Are they lovers? Is this a portrait of a three-way relationship? Or is it a post-coital snapshot after a hot three-way, itself a wonderful rejection of “commonplace loves”?

This photo has everything that is good about a great Yeros image: Naturalism, simplicity, and authenticity. A dozen other images in the book reach this level. Enjoy the Mapplethorpe-level of clarity on page 140. The model is named “Juan,” but we only see his buttocks and legs, back and arms. He holds what looks like a cheap plaster cast of an ancient portrait. On the left is a decrepit Greek torso; on the right only the legs of a man from the knees down, also made of plaster or stone. The parts and surfaces add up to something more.

In contrast, skip quickly past Charles on page 113. He’s a young and handsome but everything about the picture feels artificial. Try not to cringe while taking in Angelo on page 67. He’s the hunk with roses over his groin. Yes, I said “roses over his groin.”

And don’t get me started about the wonderful actress Olympia Dukakis on 119. Yikes!

Or ignore Yeros’s photographs completely and revel in the erotic power of “In the Boring Village,” one of Cavafy’s most famous poems. “He went to bed tonight beset by passion, all his youth aflame with desires of the flesh/ all his exquisite youth in exquisite intensity. And in his sleep sensual pleasure came; in sleep he sees and possesses the figure, the flesh he so craved…”
——
SHADES OF LOVE
Photography by Dimitris Yeros
Foreword by Edward Albee
Introduction by John Wood
Poetry by C.P. Cavafy
Translations by David Conolly
Insight Editions
Hardcover, 9781608870134, 168 pages, $75
——
Reviewer’s Note. While working on this review, I was inspired to research Cavafy. Everything I learned made me more interested. To be Greek and live in Egypt and England; to be gay in 1900; to be a modern poet before Modernism…such was Cavafy’s life. Shades of Love contains the barest of biographical information.

So if you’re at all intrigued, check out this official archive of all things Cavafy (www.cavafy.com). Also, you may have remember seeing this most romantic etching of two men in bed by David Hockney.

The title is “In The Dull Village” and it was inspired by Cavafy’s poem. The picture is considered one of Hockney’s early masterpieces and is one of the gayest things on permanent view at the British Museum in London.