Looking back at 2010 in Gay Erotica

With 18 books submitted for this year’s Awards, Lambda Literary has a healthy showing of erotica written by a number of men and one woman.

The year’s nominees include mythical creatures with hard dicks and wet holes, skaters and bottoms, one about bears, one on sex in Vancouver for diversity and several anthologies.

There is also a collection of stores of circus performers with one overtaken by dark curly passion and an illustrated story of a re-imagined Oscar Wilde tale told entirely in sensuous drawn frames.

Gay men are writing about lust in many forms bringing to print not just the ecstasy of fucking but the synthesis of passion and concern, of love and fears.  Not all the men in this year’s crop have huge dicks, and not every passionate pursuit unfolds according to plan. It’s real men having real sex.

Combining fantasy and reality, gay men seek friendship and acknowledgment through sex.  Men becoming whole through their sexuality. These stories are rich in humanity and compassion, and gone are the plots where the gay man dies in the end or the hopelessly frail boy falls victim to the strict community.  Men in these books have lives that sustain them as they explore other men’s minds and bodies.

Because coming out for us is survival, our erotica includes selfishness, hopes, realizing fantasies as well as thundering lust. We have forgiven ourselves, so in turn we forgive our sexual drive and write about it honestly.

‘Brokeback’ Minus the Ribbons 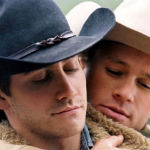 I watched ‘Brokeback Mountain’ for the third time last night, and each time I ask myself, “how did Annie Proulx get it so right?”

As gay men our lives are complex, difficult and sometimes painful.  Our literature reflects those complexities depicting good and bad parents, loss and rejection, and our unique coming out stories.

We sometimes see ourselves as sad, or go crazy celebrating our gayness, but we seldom see ourselves as clearly as Proulx has.  While TV and movies use stereotypes to assure viewers characters are gay (‘Will & Grace,’ comes to mind), in real life we are not gay characters; we are gay men and lesbians and the rest.  But we are special and sometimes more than just different.

Those stories, like ‘Brokeback Mountain’ need to be told about two men or women who fall in love living ordinary lives.

It’s time we treat ourselves and the rest of Western Civilization to a community sensitive to human emotions, willing to care for others, the less fortunate, and the spiritual.  Everyone knows gay men cruise at the gym and have a lot of sex, but do they know we’re as masculine as straight men and vital to life in our cities?

Every one knows lesbians are plumbers and police officers, but do they know they are caring mothers and fierce defenders of the environment? Our true story is one of naiveté and love, not Lycra and boots, and we are just starting to write those stories.  I applaud Annie Proulx for getting it so right.

It’s also time for those larger than life like Adrienne Rich, Audre Lorde, Tom Waddell, and Harvey Milk to take their place in America’s pantheon of gods and goddesses.  Let the myth making begin.