“An embarrassment of riches”

And the awards news continues. This week the Gay, Lesbian, Bisexual and Transgendered Round Table (GLBTRT) of the American Library Association (ALA) announced the winners of the 2011 Stonewall Book Awards, during the ALA Midwinter Meeting in San Diego.

The three Stonewall Book Awards are given annually to “English-language works of exceptional merit relating to the gay, lesbian, bisexual and transgender experience.”

“The list of books we had up for consideration for the 2011 Stonewall Book awards was an embarrassment of riches to say the least.” said Stonewall Book Awards Committee Chair, Lisa Johnston, in a press release.

The awards will be presented to the winning authors or editors at the American Library Association Annual Conference in New Orleans in June.

The Children’s and Young Adult Literature Award, which was included in the ALA Youth Media Awards press conference (we wrote about this yesterday), was presented to Almost Perfect (Delacourte) by Brian Katcher. Read more here.

In adult fiction, the list includes several Lambda favorites. The Barbara Gittings Literature Award was given to Barb Johnson’s  More of This World of Maybe Another (Harper Perennial). Johnson’s collection of short stories was also a finalist for the 22nd Annual Lambda Literary Awards, last spring. Our reviewer, Susan Stinson, raved in her review: “Reading these stories feels like falling in love with the whole brutal world again.”

Three additional Honor Books were also named in this category including Probation, by Tom Mendicino (Kensington). And thought we haven’t yet reviewed Mendicino’s book, rest assured we’re working on it.

Zoe Whittall’s second novel, Holding Still for As Long as Possible (House of Anansi) was also honored. And our editor, Courtney Gillette is working on a review as we type this. Isn’t the cover just gorgeous? 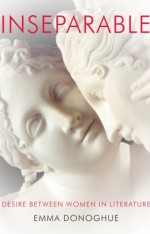 In the nonfiction category, the Israel Fishman Award was given to Emma Donoghue’s Inseparable: Desire between Women in Literature (Knopf).

We’ve yet to review this, but rest assured we have someone on the task. Donoghue has had an amazing year. Her novel, Room (Little, Brown), has been featured on every single book website, blog, magazine, journal imaginable. And the awards just keep stacking up.

In addition, four Honor Books were named in this category, all books we reviewed last year including, A Great Unrecorded History: A New Life of E.M. Forster, by Wendy Moffat (Farrar, Strauss and Giroux).  Our reviewer, Richard Bozorth wrote, “we now have a picture of Forster whose personal and imaginative life were deeply shaped by eros from the start.”

The list includes Stuart Beigel’s The Right To Be Out: Sexual Orientation and Gender Identity in America’s Public Schools (Univ of Minnesota Press)—which is perhaps the most timely book of the year. Rachel Wexelbaum wrote that Beigels’ book “should become required reading for everyone.”

A few months ago, Stuart appeared on CNN Newsroom to discuss the issue of teen suicide; you can access the entire transcription here, with Stuart’s section toward the end. He also blogs about his book here.

Certainly, a favorite book, The Secret Historian: The Life and Times of Samuel Steward, Professor, Tattoo Artist, and Sexual Renegade, by Justin Spring (Farrar, Strauss and Giroux) deserved to be included in the Honor List. Spring’s book has had a ton of coverage from us including an official event in Chicago, an interview, a review, and a column post. Did we mention he was also a finalist for the National Book Award? Exactly.

Overall, the ALA’s list is thoughtfully organized. Although a significant portion of the books honored come from the big publishing houses (Random House, Hachette, and Harper) it’s nice to see a few of the indie publishers make the list as well. Thank you ALA for recognizing  and honoring the best in LGBT literature!

For information on the Stonewall Children’s and Young Adult Literature Award and other ALA Youth Media Awards, visit www.ala.org/yma.