Lots of news as the New Year dawns, including Book Buzz marking its first two years online, so let’s get to it… 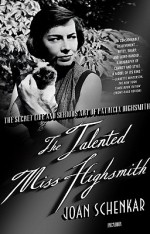 Just in time for what would have been Patricia Highsmith’s 90th birthday on January 19, Picador is reissuing the book in paperback.  Joan also edited and wrote the introduction for  Patricia Highsmith: Selected Novels and Short Stories (Norton).

Joan’s well-reviewed biography also turns up on the Band of Thebes’ survey of 2010’s best LGBT books, which you can access here.

The 2010 LGBTQ Rainbow Awards have been announced, covering eleven categories.  Elisa Rolle, who has hosted the Rainbows for two years, reports that 220 books were submitted this year by 51 publishers.  To see the winners, click here.

Elisa Reviews, the LGBTQ review site, posted its Top 100 Books of the first ten years of the 21st Century, illustrated with their book covers. Here’s the Facebook link.

Deep in the Bible Belt, J.M. Redmann’s (www.jmredmann.com) most recent novel Water Mark (Bold Strokes Books) – featuring New Orleans lesbian PI Micky Knight – was selected by The News Star of Monroe, Louisiana as one of its “Great New Novels for the Holiday.”  J.M. is a two-time Lammy winner in the best lesbian mystery category.

And romance of the briefer kind: Napping Porch Press and Bywater Books have announced their 2010 Micro-Fiction Romance Contest winners.  To read the first and second place stories, click here.

And of the historical kind: Charlie Cochrane’s Lessons in Trust (Samhain Publishing), a gay romantic mystery set in the prohibitive Edwardian era, has been nominated for The Romance Studio’s 2010 CAPA award for historical romance.

Phillip B. Williams is the winner of BLOOM’s first annual Chapbook Contest for Poetry for his manuscript, Bruised Gospels. Phillip will receive a $250 honorarium and copies of the chapbook, to be published in coming months. Judge Minnie Bruce Pratt christened Bruised Gospels “poetry that saves, sanctifies, and celebrates the lives and bodies of Black men who make art and love with each other, for each other.”

Speaking of Chelsea Station, Currier—the founder and publisher—reports that it continues to grow, with releases in the coming months that include a new memoir from Felice Picano, True Stories: Portrait from My Past; a debut collection of poems by Craig Moreau, Chelsea Boy; and The Temperamentals, Jon Maran’s hit off-Broadway play about gay pioneer Harry Hay and the founding of the Mattachine society.

Following the departure of Lise Weil, Trivia: Voices of Feminism, begun in 2004 as the online reincarnation of the print journal that ran from 1982 to 1995, is seeking a new editor.  The two most recent editions, Issue 10, were built around the theme: “Are Lesbians Going Extinct?”  Among the contributors to Issue 11: Kate Clinton, Elana Dykewomon, Sarah Schulman, Renate Stendhal, Urvashi Vaid, and Chocolate Waters.

In the current Gay & Lesbian Review, Andrew Holleran offers his perspective on the life, last years, and biographical treatment of Somerset Maugham.

Cherry Road Films has optioned Solitaire by Kelley Eskridge, a dark novel about a young lesbian convicted of a terrible crime and forced into an experimental program– virtual solitary confinement in a sealed cell within her own mind.  Kelley will write the screenplay.  A New York Times “notable novel,” Solitaire is being reissued this month by Small Beer Press.

Dog Ear Audio, a producer of gay-themed audio books and video trailers, was featured December 27 on Denver’s KGNU  Monday night program Outsources.  During the program’s second half, Dog Ear’s Karen Wolfer discussed the company’s creation and the importance of lesbian literature in our lives.  You’ll find the podcast here.

Saints and Sinners Literary Festival is offering an early registration discount for its 9th annual event, which will take place in the New Orleans French Quarter May 12-15, celebrating LGBTQ literature.  The discount will be available January 15 through February 15.  Click here for more information: www.sasfest.com.

The latest issue of Icarus: The Magazine of Gay Speculative Fiction (Winter 2010) is out, with tales by Matt Cheney, Sunny Moraine, and Alejandro Omidsalar and an interview with Hal Duncan.  Click here to  order print copies and here (at a big discount) for the e-version.

Twenty-one years after publication, Lesléa Newman’s classic children’s book, Heather Has Two Mommies, is still in print from Alyson Books (alysonbooks.com) and the subject of a Jewish Women’s Archive.

Carsen Taite has a video up for her latest novel, Nothing But the Truth (Bold Strokes Books), a courtroom drama crossed with lesbian romance.

The UCLA Extension Writers’ Program blog featured Jamie Schaffner as one of its student “success stories” (http://www2.uclaextension.edu/writers/success.php?recordID=214), tied to her entry in Best Lesbian Romance 2011 (Cleis Press), edited by Radclyffe and out this month.  Jamie’s contribution to the collection is an excerpt from her lesbian coming-of-age novel-in-progress, Get the Girl.

Damon Galgut’s new novel, In a Strange Room: Three Journeys (Harper), which partly explores homoerotic impulses, has been getting a lot of positive attention, including reviews by Carolyn Kellogg in the  LA Times.com and Maria Russo in NY Times.

Patricia Nell Warren sends news that The Front Runner, her classic novel of doomed gay male romance, is breaking down barriers in foreign lands, with a Ukrainian translation coming to that region (also a collection of her Ukrainian-language poetry) and a translation in Complex Chinese set for distribution in Taiwan, Hong Kong and Macao.  Patricia also has a new edition of Harlan’s Race, the sequel to The Front Runner, coming out in Germany.

RADAR Productions, the nonprofit founded by Michelle Tea in 2003 in support of queer literature, has announced its Second Annual Eli Coppola Memorial Poetry Chapbook Prize, open to anyone who has not published a full-length collection of poetry in the past five years (not including self-published works.)  The postmark deadline is February 9.  This year’s judge is poet and editor Matthew Zapruder.  For more details, click here.

Tomas Mournian’s debut novel hidden due out from Kensington later this month, got at glowing Publishers Weekly review. Based on “Hiding Out”, Tomas’s award-winning article for the San Francisco Bay Guardian, hidden tells the story of teens who escape abusive gay-to-straight boot camps and find refuge in a San Francisco safe house, staying hidden until they come of age.

Mari SanGiovanni adapted her novel Greetings From Jamaica, Wish You Were Queer… (Bywater Books, 2007) into a screenplay, which reached the finals in several screenwriting competitions, including a second place tie at the Woods Hole Film Festival and a Top 10 Finalist finish at the New Hampshire Film Festival.  The story revolves around two divorced women who fake a lesbian marriage to keep their kids in the same school, which gets complicated when they fall in love.

John Dancy Jones has posted his review of a recent reading by out poet Jeffery Beam on his Raleigh Rambles blog, which includes links to Jeffery’s most recent collection, Gospel Earth (Skysill Press).

Seven Kitchens Press has selected a poetry collection from Collin Kelley , Slow to Burn, for its Rebound Series, with publication slated for July.  The collection was originally published in 2006 by MetroMania Press.  Meanwhile, Collin is working on his second gay-themed novel, Remain in Light, a sequel to Conquering Venus (Vanilla Heart).

Henry Alley was interviewed last month by Jody Seay on her radio program Back Page, which airs on Oregon WIN.  They discussed Henry’s novel, Precincts of Light (Inkwater Press),which revolves around Oregon’s controversial 1992 anti-gay Ballot Measure 9, which ultimately failed.  (Jody’s novel, The Second Coming of Curly Red, also concerns Measure 9.)  Henry also had a story, “The Alternative,” in the December issue of QReview, which you can read here.

Lammy finalist Mary Cappello is staying busy: January 10 through 14, she’ll be a guest author on the Powells Books.blog.  She was recently featured on Carolyn Kellogg’s Los Angeles Times book blog Jacket Copy discussing the most interesting book she was taught in school.  And Salon.com interviewed Cappello about her new book, Swallow (The New Press), a lyric biography about Dr, Chevalier Jackson and his collection of thousands of objects people swallowed or inhaled, a popular attraction at Philadelphia’s Mutter Museum.  For a video introduction to this unusual museum of human pathology, click here.

Three-time Lambda Literary Award finalist Ron Suresha (a/k/a R. Jackson) has a website up for his latest book, The Uncommon Sense of the Immortal Mullah Nasruddin (Lethe Press), a non-queer collection of the Turkish folk hero’s joke’s and stories.  Ron is the editor of Lethe’s Bear Bones Books imprint.

The 10th annual West Hollywood Book Fair, always replete with LGBTQ authors, will take place this year on October 1, switching from Sunday to Saturday to coincide with the opening of the new West Hollywood Library in West Hollywood Park.

On that note, authors Anne Rice and son Christopher Rice will make a special appearance January 6 in Los Angeles to benefit the West Hollywood Library Fund.  Following a reception, they’ll discuss their work, gay marriage, and other issues, and sign copies of their books, which will be available for sale.  Ticket prices and other details here.

On his Facebook page, Dale Madison posted a personal note from Senator Mark Reno, the first openly gay man to serve in the California senate, congratulating Dale on his anti-bullying tale, The Friendship Train: Sissy Sammy in the Land of WEHO 90069.

Rick R. Reed (www.rickrreed.com) linked with ebook publisher Untreed Reads for an ebook version of his vampire novel, In the Blood, to be re-titled Blood Sacrifice. Look for it later this year.

Finally: I’m grateful to see The Limits of Justice, my fourth Benjamin Justice mystery and a Lammy winner, turn up on Elisa Reviews’ Top 100 Books of this century’s first decade, which was mentioned above.  I’m also grateful that it’s been reissued by Bold Strokes Books, along with three other early Justice titles.