Hate: A Romance, the Prix de Flore winning first novel by the young French writer and philosopher, Tristan Garcia (Faber and Faber), is a romance in the epic sense—much like Don Quixote or War and Peace.  It is a romance of the AIDS epoch in France from the early 80’s through the fin de siècle and is a study in the movement towards the right of the French intelligentsia as seen against the backdrop of the gay rights movement in the midst of the AIDS crisis.

Central to the novel is the love-hate relationship between Dominique and William, a Verlaine-Rimbaud duo who personify the loss of idealism in the French gay movement during those decades. Dominique Rossi, a dark, young Corsican, comes out in the early 80’s in the midst of the Parisian gay cultural revolution and sees gay love as the ultimate act of liberation:

What was so joyful about it, it wasn’t just the music, the house nation, or the disco back before that, or the fucking around.  It was everything: the friendship, the philosophy, the clothes, the body hair, the food, the colors.  That joie de vivre was everywhere.  What made it all the more fun was that it seemed so political. We’d ditched the political parties, Trotsky, the discussions, the ‘workers.’  It was sexy, you know what I’m saying?  You fucked and that was political.  You kissed a guy, that was your own October Revolution. 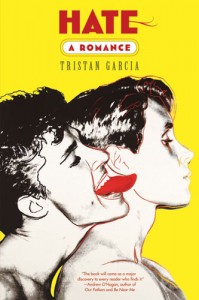 As the decade passes Doumé finds himself thrust into a leadership role in the emerging AIDS crisis:

Doumé made an antispeech…‘We have nothing to say and they censure us.  We’re supposed to just sit there and let them tell us what to do—the Party, the state, Papa, and all those paternalistic institutions.  So—what do we faggots want?  I’ll tell you what we want, we want to live.  And what do you want?  I’ll tell you, you want all of us faggots dead…No, we say, it’s not right.  We’re not going to just disappear.  Science won’t be coming to our rescue out of the generosity of its heart will it?  No!  We have to break the silence and stand!  Stand up!….And if I’m guilty of being sick you’re the ones who are responsible.  We have the right to love, and you have the duty to save us.’

Garcia perfectly captures both the exuberance of gay freedom of the 80’s and the growing political maturity born of the AIDS action groups in the 90’s.  But as Doumé fights for his community’s life he slowly begins to shift from a politics of liberation to an assimilationist stance that younger gays coming out in the 90’s and early 00’s reject.

Such is his beautiful young Jewish lover, l’enfant terrible, William Miller, who shakes up the staid French literary world with an ‘autofictional’ rant.  Willie embraces gay sexuality as liaisons dangereuses and advocates unsafe sex as an act of queer liberation:

You’ve got cops like Dominique who tell you how to fuck and want queers to collaborate with society, to live, to survive.  But fuck, they’re like those assholes from ’68 who end up in the Senate, and all the time they’re juggling the wife and the family with the little piece on the side…. We didn’t become queer for that.  We became queer because we say, ‘Fuck society,’ because we don’t want to collaborate, and because we know that if you don’t live, you die…It’s great to see these young queers come to see me and tell me, thank you, I’d almost given up.  They want sperm, they want poz cum.  You can’t imagine, you’ve got to risk your life to feel it.

The terrible consequences of this rebellion against safe-sex orthodoxy are laid out plainly by Garcia, even while he shows the hypocrisy of gay leaders like Doumé who discovered their sexuality in the midst of the hedonism of 80’s gay culture, but now preach a party line about responsibility: “All those assholes who lecture us and used to do it without using anything, its just so unfair.”

Perhaps the most devastating section of the book is an examination of Willie’s Web posting of explicit pictures of Doumé.  His mocking commentary about Doumé and the politics of AIDS is both bitterly funny and heartbreaking.

No happily ever after in this novel.  The novel’s only minor fault is that Garcia does not show us more of Doumé and Willie’s romantic relationship, which must be intense enough to justify a life-long obsession that becomes a passionate hatred.  Garcia’s use of a second-person narrator limits him to a peripheral view of the physical aspect of the men’s relationship—which turns out to be the heart of their hatred:

One night we were dancing and I saw them and got it.  I mean, I saw them sexually.  Doum was the more sexual one, at the time, though Will said he stopped getting hard-ons later on.  That all he thought about was AIDS.

Yet, the narrator, the couple’s fag hag, Elizabeth, is a useful device that allows the reader an objective view of events while interjecting a kindness that allows us to sympathize with Willie even in his most despicable actions.
——
The anti-hero of Crook by Michael Gouda (Dreamspinner Press) is Ned Fickler, a young, black street criminal in contemporary London:

Ned Fickler was a crook.  There was not doubt about that.  From the age when, at fifteen, he’d officially finished school to his present age three years later, he’d spent most of his time getting money by nefarious means. 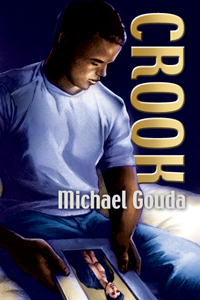 Ned meets Jason Truman after he rescues him from a street mugging gone bad staged by himself and his mate, Colly.  While ministering to Jason’s knife wound, Ned learns that Jason is a cop—a fact that only temporarily cools off Ned’s heat, a sexual tension that flames up later when Jason does a body search on Ned who is under suspicion for a burglary:

’I’m sorry Ned, but I have to do this.  A simple search.’  He reached out and ran his hands down the outside of Ned’s arms down to the waist, then up his body to his armpits.  Not that there was anything Ned could have hidden under the skimpy T-shirt.  Then he did the same down the outside of Ned’s legs, and finally—Ned bit his lip to stop himself crying out—up the inside toward his fork.  Jason slowed down as he neared the top, but then gently, so gently, passed his hands over the bulge that was Ned’s cock and balls, and finally between his legs, feeling into the crack of his arse.  It was both intimate and professional.  ‘Nothing wrong there,’ he said.

In Gouda’s picaresque romance, Ned’s crookedness goes beyond his criminal capers when, with Jason out of town, he picks up a mischievous college student after stealing a mob boss’s sports car.

’This is a marvelous car,’ [Mark] said.  ‘Marvelous.’  There’s a nob’s word.  ‘Fucking great,’ said Ned.  The engine sang, power spreading through the chassis so that his very body seemed possessed by it, spreading up his legs through to his loins.  He could feel it in his body, working up so that the power was in him and was him.  ‘Fucking great,’ repeated [Mark].  He stretched out even more, his legs under the dashboard.  He put his hands to cover his own groin.  Ned wondered if, like him, he also had an erection.  Ned couldn’t hide his, of course, and the material at his groin bulged.

The theft leads to bed and to Ned’s rise in the criminal world.  During a thrilling staged heist at Heathrow, Ned’s flirtations with fellow-criminal Anwar once more are not limited to the risqué but ultimately innocent variety countenanced by traditional romance as a foil for the central relationship, but go so far as to find Anwar tied-up in a bathroom stall with Ned’s hand around his cock:

He looked at Anwar, standing there in his T-shirt and underpants, the whiteness of the material contrasting with his brown skin.  Ned produced the ropes he had brought and tied Anwar’s wrists.  He led Anwar back into the stall, and Anwar sat on the toilet.  Ned knelt and tied his ankles, his head on a level with Anwar’s groin.  ‘Tighter,’ said Anwar. ‘You’ve got to make it look good.’  Ned pulled the rope tighter, and Anwar winced.  Ned leaned over, said, ‘Sorry,’ and kissed him on the mouth.  Anwar sat there, helpless.  Ned reached between his legs and stroked his cock.  ‘You’ve got to beat me up a bit,’ said Anwar.

Like many a romance hero, Ned brings plenty of deep dark secrets to his relationship with police detective, Jason, but unlike most romance heroes, his secrets are never revealed to Jason and the novel ends with an unrepentant Ned experiencing a frisson of excitement over the prospect of pulling his next heist.

All to which I say, bring it on!  Though the book shows some technical flaws, such as occasional problems with viewpoint and continuity, Ned is an engaging anti-hero and the reader has no problem identifying with his obvious appeal to all those around him—coppers and criminals alike.  Likewise, Ned’s harrowing by-the-skin-of-his-teeth escapes make the book a genuine page-turner.  Central to Ned’s intriguing personality is his relationship with Jason, who has caught him, but hasn’t quite caught him.

In this month of New Year’s resolutions, this reader is glad that the despicable, yet somehow sympathetic Willie, and the adorable street criminal Ned do not turn over new leafs.  These bad boys are too good to repent.