In recognition of World’s AIDS Day (December 1), Borders sponsored special readings and performances to benefit Lifebeat, a music industry nonprofit involved in HIV prevention and treatment.  Lifebeat will receive a percentage of proceeds from books, CD’s, and DVDs signed by the authors and performers and sold that day.  Lambda Literary Foundation helped coordinate the LGBT readings for the event, which reportedly raised $25,000 for Lifebeat last year. 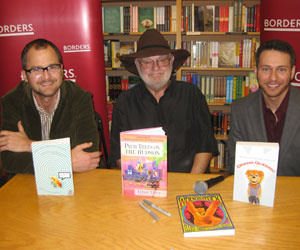 In related news, editors Kelly Norman Ellis and M.L. Hunter have assembled writers and artists from around the world, including Rafael Campo, Kwame Dawes, Reginald Harris, Tony Medina, Lamont B. Steptoe, and Emanuel Xavier to contribute to Spaces Between Us: Poetry, Prose and Art on HIV/AIDS (Third World Press), a collection of poetry, fiction and creative nonfiction that paints living portraits of HIV/AIDS.

Also timely, HIV Date has posted the written transcript and video of the rousing “Why We Fight” speech delivered by the late author/activist Vito Russo (The Celluloid Closet) at a 1988 ACT UP demonstration.

Let’s also mention that the Advocate’s HIV Plus Magazine is now online in a full color, reader-friendly mode.  You can leaf through the pages and articles here.

Author/poet Perry Brass (perrybrass.com) is among those interviewed for the upcoming documentary, All the Way Through Evening, directed by Australian filmmaker Rohan Spong (rohanspong.net), about five gay composers, all friends in New York’s Greenwich Village, who died of AIDS in the early years of the crisis.  Perry’s poetry is also featured in the moving title song cycle, set by the late Chris DeBlasio, called “All the Way Through Evening, Five Nocturnes for Baritone and Piano.”

Stella Duffy was named Stonewall Writer of the Year at this year’s UK Stonewall Awards for her historical novel Theodora; Actress, Empress, Whore.  You can read Tom Holland’s review in the Guardian.

As previously announced, legendary editor and publisher Don Weise, formerly with Alyson Books, has launched Magnus Books (magnusbooks.com), an independently owned publisher of LGBT literature. Don expects to publish 15 to 20 new titles per year, including fiction and nonfiction, with his first season being Fall of next year.

Justin Spring’s gay-themed Secret Historian: The Life and Times of Samuel Steward, Professor, Tatto Artist and Sexual Renegade is the only biography selected as a finalist for this year’s National Book Award.  Amazon.com has named it one of the Top 10

biographies of the year and one of the Top 100

books of the year. To view video of a C-Span talk by Justin at the National Book Awards, click here.  More video, podcast, and review links can be found here.

Filmmaker Nicole Conn has novelized her screenplay for her film festival hit Elena Undone and sold it to Bella Books, which will publish it next year, with movie stills included. If you recall, Conn’s novelization of her breakthrough 1992 film Claire of the Moon went on to be a bestselling lesbian classic.  Read Edie Stull’s profile of Nicole in Examiner.com.

As previously announced, Lambda Literary Foundation is the new home of the largest monetary prize awarded exclusively to an LGBT writer: The Outstanding Mid-Career Novelists’ Prize, previously presented at the annual Saints and Sinners writers conference in New Orleans.  Made possible by James Duggins, PhD, the award consists of two cash awards of five thousand dollars and will be presented at the annual Lambda Literary Awards in May 2011 in New York City.

David Francis’ story “Once Removed” appears in Best Australian Stories 2010 (Black Inc), edited by Cate Kennedy, and was singled out for praise in a Sydney Morning Herald review of the collection.

BLOOM (artsinbloom.com) publisher Charles Flowers has announced Alicia Shandra Holmes as the winner of the first annual BLOOM Chapbook Contest for Fiction for her story, “A Small Uprising.”  Alicia will receive $250; copies of the chapbook will be published early next year.  Richard McCann served as judge.

Stephen Bottum reports that Band of Thebes’ annual survey of the year’s best LGBT books is the biggest ever: 80 authors select their favorites of 2010, naming nearly 100 titles. Among the most mentioned are new works from Justin Spring, Eileen Myles, Wendy Moffat, Adam Haslett, and K.M. Soehnlein and many others, crossing many forms and genres.

Speaking of Emerging Voices, a fellowship has just gone to Jamie Schaffner, a UCLA Kirkwood Award winner last year.  During PEN’s year-long program Jamie will work on her lesbian coming-of-age novel, Get the Girl, with a seasoned mentor.  Look for an excerpt in Best Lesbian Romance 2011 (Cleis Press), edited by Radclyffe, due out next month.  Read more here.

Meanwhile, contributors to Best Lesbian Erotica 2011 (Cleis Press), edited by Kathleen Warnock, will read in NYC at KGB Bar on December 16 as part of the city’s annual Drunken! Careening! Writers! bar bash.   Lea DeLaria will read from her forward to the book and introduce the readers: Charlotte Dare, Kiki DeLovely, DL King, Sinclair Sexsmith and Xan West. Admission is free.  Details at kgbbar.com.

Also in NYC, a free staged reading of Mark Finley’s Christmas Moon is planned for December 12, presented by TOSOS (The Other Side of Silence) as part of its Robert Chesley/Jane Chambers Playwrights Project.  Details here.

Author (The Carousel, A&M Books) and TV producer Stefani Deoul and producing partner Russell D. Kolody have signed with Samuel Goldwyn Films to produce a TV movie based on the classic and controversial Lillian Hellman play The Children’s Hour.  The producers plan a “modern retelling” of the bleak tale of two close female friends, one a latent lesbian, suffering malicious rumors about their relationship that lead to tragedy.  After opening in 1934 for a two-year run on Broadway, the play was sanitized for film as These Three (1936) and filmed again as a controversial 1961 movie starring Audrey Hepburn and Shirley MacLaine, with the original title and lesbian elements restored.

Bywater Books has reissued Marianne K. Martin’s novel Mirrors.  Originally published by Bella Books in 2001, it tells the story of a lesbian teacher who attempts to counsel and help a bullied student while hiding her own sexuality to protect her job and career.  An interview with Marianne about Mirrors can be found in the Bywater Newsletter archives (bywaterbooks.com); a related blog is posted here.

Daniel M. Jaffe’s The Limits of Pleasure, a novel about a gay Jewish man’s sexual and spiritual adventures in Amsterdam, has been reissued by Bear Bones Books of Lethe Press. Initially published by Haworth Press in 2001, it was a finalist for a ForeWord Magazine Book of the Year Award and excerpted in Best Gay Erotica 2003.

David-Matthew Barnes reports that 1) he was recently interviewed on the public radio show “Insight” to discuss his young adult novel Mesmerized (Bold Strokes Books) and its exploration of hate crimes against LGBT youth; 2) his all-female stage play Sky Lines recently premiered at The Producer’s Club in NYC and he wrote an article about it here; and 3) JAC Publishing & Promotions (jacpub.com) has acquired the publishing rights to his gay-themed stage play Sloe Gin Fizz, with excerpts featured in The Best Men’s Stage Monologues of 2000 (Smith and Kraus), edited by Jocelyn Beard.

Sophia Kell Hagin has posted a video interview about her debut novel, Whatever Gods May Be (Bold Strokes Books), a war story featuring a lesbian Marine protagonist.

Diary From the Dome, Reflections on Fear and Privilege During Katrina, written by queer Arkansan Paul Harris, received a recent “Most Intriguing Book Trailer” nod from the New Covey Trailer Awards.  View the trailer here.

Haley Walsh has launched a new website with excerpts and reviews for Foxe Tail, Haley’s new mystery about an easy-on-the-eyes high school teacher who gets involved with murder.

Paul G. Bens’ Kelland (Casperian Books), a novel dealing with the emotional aftermath of priestly abuse, got a nice notice (“clings to your mind and forces you to think about it long after you’ve stopped reading”) from Three Dollar Bill Reviews.

Radclyffe has put out a call for submissions for Best Lesbian Romance 2012, which she is editing for Cleis Press.  Guidelines here.

James Magruder (jamesmagruder.com) has two queer pieces out: a short story, “Elbow and Legs,” in the current issue of The Normal School (thenormalschool.com) and a short play, Nine Rooms’ Worth, in the latest issue of Arts & Letters. (al.gcsu.edu).

c. hulio c. (jaguarlunart.com), author of the Flight of the Jaguar Magician (El Vuelo del Mago Jaguar in the spanish edition) (Createspace.com), an illustrated volume of queer mythology, sent us several links: an online interview by Charlotte Robinson for OutTakes; one by Merry Gangemi of Women Stirred Radio; and visual and offbeat YouTube videos about his book, theatre work, and dialogue with a puppet.

Dale Madison has a Youtube video up for his new “adult fairy tale,” Sissy Sammy in the Land of WEHO.  It features some of his favorite tunes, including out Bishop Carl Bean singing the ‘70s disco classic, “I Was Born This Way.”  Watch here.

The third book of Fay Jacobs’s “Frying” Trilogy, For Frying Out Loud – Rehoboth Beach Diaries, got a positive notice (“I almost wet myself laughing”) at Amos Lassen Reviews.

Frank Anthony Polito, hoping to generate producer interest in his novel Band Fags!, has shot a pivotal scene from the book with the help of filmmaker Todd Stephens (Edge of Seventeen, Another Gay Movie).  In the scene, protagonist Jack Paterno learns a lesson from his hunky teacher, played by Polito’s partner and Kensington publicist Craig Bentley.  Here’s the link.

Marianne Banks has sold her debut novel, Growing Up Delicious, to Bella Books for release next year.  Described as lesbian general fiction, it follows a fifty-something protagonist back to her hometown to clean up after her mother’s suicide and to confront those who conspired to drive her out of town decades earlier.

Jim Tushinski has created a Facebook fan page for his debut documentary-in-progress, That Man: Pete Berlin, with new video clips.

Congratulations to Mary Meriam, editor of the Lavender Review, who reports that  Issue 2 (Epithalamion) is now up and available, including poetry from Marilyn Hacker, Minnie Bruce Pratt, Eleanor Lerman, and U.A. Fanthorpe, and art from Sarah Lucas, Lydia Daniller, Louise Fishman, and Liz Ashburn.

Josh Aterovis (joshaterovis.com) has a trailer up  for The Truth of Yesterday, his new title in his Killian Kendall mystery series. His last, All Lost Things, was a Lambda Award finalist for best gay men’s mystery.

Finally:  My holiday wish: that Book Buzzers consider purchasing LGBT-themed books as gifts this holiday season, and that, if possible, they do it at their local LGBT or independent bookstore or online at LGBT booksellers such as A Different Light.  If you have to go the chain route, please consider Borders first, for its participation in World AIDS Day, as mentioned above.  Good holidays, everyone.

Brief items (no more than a few lines) of LGBT writing and publishing news should go to jmwwriter@aol.com, providing basic information, with a web link whenever possible. No attachments, please. Book Buzz does not cover standard book releases or local author events, such as readings. Please study the column to see what works for Book Buzz.