The Spotlight features news about (and sometimes interviews with) allies who are active in supporting and celebrating LGBTQI speculative fiction.

Our guest this week is Kathe Koja, author of Under the Poppy (Small Beer Press). 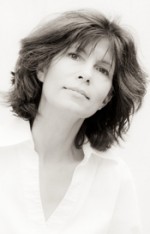 Kathe is a straight ally whose short stories and novels feature a diverse range of characters in a variety of genres. She began writing after she attended the Clarion workshop, and her first novel, The Cipher, won the Bram Stoker and Locus Award.

Following that success, she went on to write several novels for adults before turning a short story for younger readers into her first YA novel, straydog, followed by Talk, a story about a closeted teenager, which was named a YALSA Best Book for Young Adults.

Most recently, Kathe has returned to writing for adults with her new novel, Under the Poppy, set in war-torn 19th century Europe, and it includes a few very naughty puppets. Kathe has also adapted the story into an immersive stage show, to debut in 2011.

Q: Under the Poppy has a very colorful cast and some of the most colorful characters are the puppets (or mecs). Do you have a favorite mec?

What a rockin’ question to lead off with! Yes, in fact I do—the antic, slippery, completely untrustworthy Pan Loudermilk, who scares the hell out of one of the poor working girls in the book’s opening scene, and wreaks havoc every time he takes the stage. I do admire a fellow with flair. Puppets make wonderful fictional characters because they are themselves fictional from the get-go, but unbound from all the constraints a “real” character must obey.

Q: With a well-researched 1870s setting and a queer love story at its heart, it’s understandable that some people compare Under the Poppy to Sarah Waters’ Victorian lesbian novels. Had you read any of those books before you wrote yours, and what do you think of the comparison?

I stay away from fiction in general when I’m writing any novel—but since then I’ve read all three and adore them all, though Fingersmith is probably my favorite.

To be compared with Sarah Waters’ work is a pleasure and a compliment.

Q: You’ve written all over the map in terms of length and style, from short stories to novels, in horror, fantasy, mainstream literary and now historical fiction. Is there anything you haven’t tried that you’d like to write in the future? 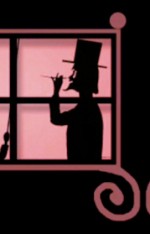 Watch the 'Under The Poppy' Trailer

I never really know what I’m going to write next—one of the great joys of doing this work is just following the path, seeing where the work leads. Although there have been blind alleys along the way, and a couple of dead ends, it’s tremendous fun and always a challenge to work in a new genre, learning its contours and figuring out where the boundaries are.

I recently adapted Under the Poppy for the stage: my first try as a playwright! Completely different than writing a novel or piece of short fiction: these words are meant to be SAID. And theatre is a collaborative art, completely unlike sitting here alone at my keyboard.

If I get very, very brave I might try to write text for a picture book for very young readers, the most difficult discipline of all, I think, next to haiku.

Q: You may be best known for your young adult novels, all of which are considerably tamer than Under the Poppy, even if they deal with potentially controversial topics. Do you ever worry that young readers will stumble upon your adult work before they’re ready for it?

To me, what is most “adult” about Under the Poppy is not the sexy brothel bits or even the cruelty of the war scenes (both on and off the battlefield), but its inherent theme, which is faithfulness: how do we stay true to a person, a profession, an art; how do we keep our love and commitment strong even through disappointment and loss, and the painful passing of time?

That’s not a young reader’s theme. So to my YA readers I would say, wait awhile, and this book will mean more to you after a few more years on the road.

Q: straydog (which is about a girl who tries to befriend a feral dog) won the American Humane Society’s KIND book award and the ASPCA’s Henry Bergh award. Have you ever worked in shelters or rescued strays?

All my cats have been adopted from shelters—there are three with me now, lazy, bossy and gorgeous little guys—and I definitely try to help if I see an animal who needs assistance (a friend and I just rescued a baby squirrel, in fact, so little his eyes weren’t even open! We got him to a wildlife rehab expert and he’s doing fine).

I also volunteer with the Michigan Humane Society in an administrative capacity: they also serve who help file paperwork.

Q: With a husband who’s into painting and photography, and a son who’s into drawing and animation, you’re surrounded by visual artists. Do you think about writing projects differently after talking to your family members about them? 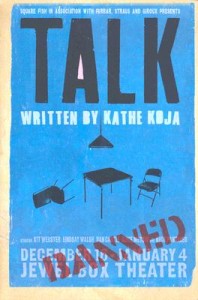 Read our review of 'Talk'

Since they’re both visual artists, and I am verbal, I rely on their vision in spots where I have none and on their very different ways of processing what they see (and read).

It’s also given me a strong and thorough grounding IN the visual, since, like many writers, I tend to see everything as story first.

I’ve also been fortunate enough to work with both of them: Rick Lieder, my husband, has done all but one of the book covers for my YA novels, and Aaron Mustamaa, my son, worked on the gorgeous book trailer for Under the Poppy.

Q: Can you tell us more about the stage version of Under the Poppy? What will it be like, and where and when can we see it?

It’s going to be intense and fabulous! The moment you step inside, you’ll be IN the world of the Poppy: at your cabaret table surrounded by lovely floozies, the piano player playing his heart out, puppets of course and film to help tell the story of the characters, all of whom are right there beside you…and if you wanted to attend in a top hat and tails, or Victorian punk attire, why, you’ll feel totally at home.

I’m collaborating with film director Diane Cheklich, who directed the trailer, award-winning costume and environment designer Monika Essen, composer Joe Stacey (who’s already written some amazing music for the show), with the shared goal of bringing the story alive in another, different way for the audience.

We’ll be staging it at the Chrysler Black Box Theatre, at the Detroit Opera House, in late 2011.

Kathe lives in Michigan with her husband, son and three cats. She keeps her main journal on her website , has a Facebook page and a website specifically for news and notes about Under the Poppy. This interview first appeared on The Outer Alliance.

‘Under the Poppy’ by Kathe Koja
The Banal and the Profane: Tenea D. Johnson
'Forgive Me If I’ve Told You This Before' by Karelia Stetz-Waters