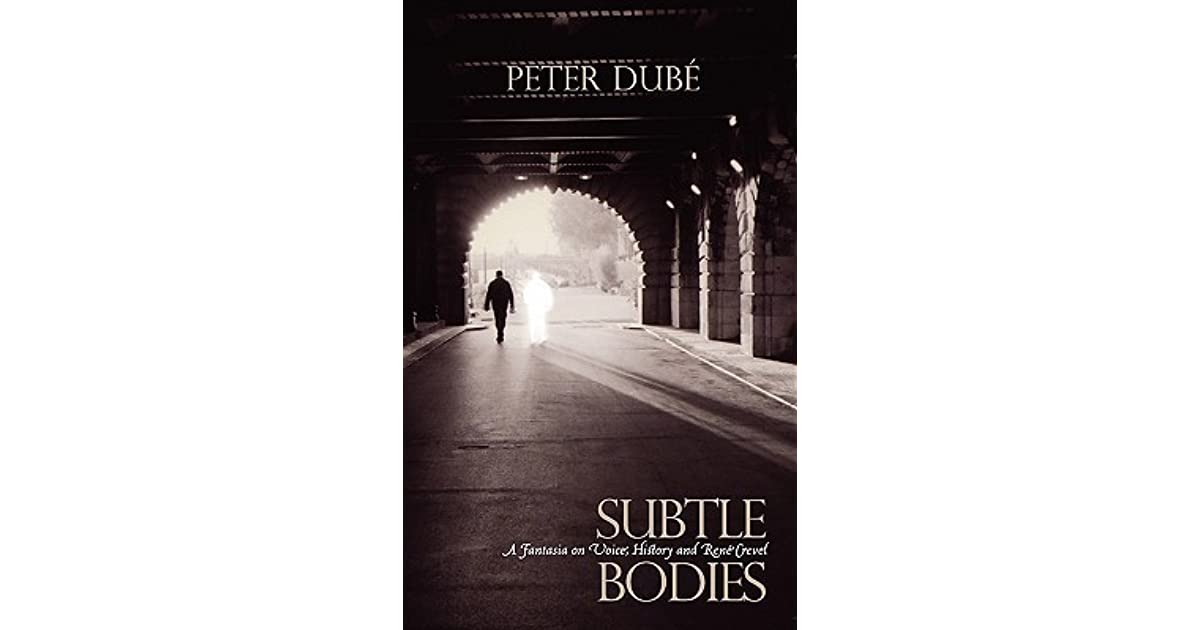 In Subtle Bodies: A Fantasia on Voice, History, and René Crevel by Peter Dubé, the ending is known from the beginning.

The poet returns home. He ignites the gas. He waits.

It is while waiting for his assured death that Surrealist poet René Crevel tells his story, and it is the seeming lack of suspense in that certain ending that author Peter Dubé must overcome. Fortunately, Dubé’s delicate speculation as to the cause of Crevel’s despondence and his careful, imagistic prose are more than a match for this difficulty.

Subtle Bodies is a tiny gem of historical fiction.

The real-life René Crevel was connected to the Surrealist movement in France in the 1920s and early 1930s. He killed himself in the same manner as Peter Dubé describes, but the reasons for his choice remain unclear; his suicide may have been influenced by illness or angry in-fighting among writers that excluded the Surrealists from the International Congress for the Defense of Culture in 1935. The sketchiness of Crevel’s motivations allows Dubé to fill in the gaps with fiction, similar to what Christopher Bram did for James Whale in Father of Frankenstein or what Edmund White did with Stephen Crane in Hotel de Dream.

From the historical record, Dubé chooses to emphasize the political wrangling surrounding the International Congress, but he buttresses this with everything from the confusion of internal voices that Crevel calls his “Interlocutors” to the pressures of his close friendship with André Breton, the charismatic but homophobic leader of the Surrealists. Crevel is wild about Breton, to the point of faking trances in order to capture his friend’s imagination, convinced that “where André fixed his archangelic glance, he could burn away darkness.”

Of course, this turns out to be untrue: André’s negative stance on homosexuality creates an unbridgeable gap between them. René is both magnetized and repulsed by André, unable to understand how a man “who had dedicated himself to the deepest imaginable explorations of the human spirit, the liberation of desire…couldn’t come to grips with something as simple as a kind of love that was different from his own.”

This repulsion reverses itself, as well, with René drinking heavily, confused and “angry with [himself]” for the impossible contradictions in his relationship with André.  Although he sees his love for André as “no failing on my part” and “inevitable,” it contributes to the emotional tumult that drives René forward, toward his inevitable end.

Dubé fills the road to that end with precise prose, its details quickly painting his settings and each scene’s tone.  Just the opening pages, with their quotidian details of an “armchair with…green silk cushions,” a “bronze coffin nail with a death’s head embossed on one end,” and a reptile’s foot that “a friend brought back for me from one of his more eccentric voyages,” conjures Crevel’s Parisian room and a fascinating, aesthetic life revealed in objects.

Dubé finds the lushness hidden in everyday events, even making public sex in a Parisian park sound elegant. Crevel compares his and other men’s night-time cruising through the parks to religious observance and to a theatrical spectacle, one where “countless ferocious copulations are undertaken with concentration, with so much commitment and deliberateness and sheer care that they cease being rut and are made artful. Performances worthy of the park’s sublime structures, its architecture and elegance, devotions so beautifully performed that the clear-throated orisons of cathedrals everywhere might grow quiet before them.”

The heights of emotion that Crevel finds in the sexual hunt are matched by the hopelessness he feels in his failure to be helpful or useful to an audience of workers to whom he lectures about Surrealism—the stage beneath him becoming “viscous as muck, red and grey; its foul odor [filling] my nostrils as shame crept across my brow.” The intensity with which Crevel confronts life is everywhere present in Dubé’s language, indicating the wild emotional shifts that make his breakdown plausible.

Subtle Bodies is ultimately a profoundly depressing book—this is as it must be.

René Crevel arrives at a point where he finds a “world utterly without hope,” as Hitler rises to political power, rapid technological advances promise “a whole universe created only to be presided over by a terrible and artificial eye,” and art fails to fashion social change.

That it should also be so beautiful in its exploration of Crevel’s destruction makes it a book to ponder and reread.
——
SUBTLE BODIES:
A Fantasia on Voice, History, and René Crevel
By Peter Dubé
Lethe Press
ISBN 9781590213308
Paperback, $13, 94 pp.