In the late 1960s, I was in the 8th Street Bookstore looking at a copy of Variety Photoplays by Edward Field, a poet who was well known for his earlier work Stand Up, Friend, With Me. In the wintry, crowded bookstore I noticed a man looking at me and curiously smiling. But hell, this was the Village and men were always smiling at each other.

I turned away, going on with my skimming through the slim Edward Field book. Poetry wasn’t to my liking; I preferred literary novels with some heft to them, but there had been a recent review of the book and when I saw it in the bookstore, I picked it up and read a few pages for myself. 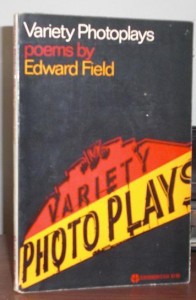 “That’s a very nice book,” I heard a man say. I looked up; it was the man who had been giving me the eye just moments ago, now standing near to me and holding a copy of the same book, Variety Photoplays.

I looked at his cleanly shaved face and well scrubbed appearance and bashfully said, “I suppose. I read a review about it, wasn’t bad at all.”

He winked at me and said, “You should get it, if just for the title, Variety Photoplays. That’s a very nice movie house. Have you ever been there?”

I looked down at the book, studying the cover. My face turned red. Yes, of course. The Variety Photoplays was a small movie house that I was familiar with on 3rd Avenue between 13th-14th Streets that showed corny girlie films but was better known for being a faggot pick-up place—a place where you could get a handjob/blowjob, with no need of knowing who was giving it to you. And as I stood there, glancing back at the man, I instantly felt my erection growing in my pants.

“Nope, never been there…” I shrugged and shook my head.

He curiously looked at me. “I’m sure I saw you there, sitting in a back row. Or was it the balcony they have…?”

I felt uncomfortable and replaced the book back down on the table (would easily pick it up later) and moved away from the man. He came after me.

“My mistake,” he said. “But in the darkness, such as a movie theater, it’s very easy to misidentify someone; you don’t know what you’re doing with a person. That ever happen to you?”

But I didn’t want to draw attention to myself or mention it, especially with someone I just met in a bookshop. In the Variety, you did what you wanted, queer or non-queer stuff, and went your way.

Maybe homosexuality was becoming more open and accepted, but I preferred the silence of shadowy movie theaters—you could shout and parade all you wanted, just leave me alone in the darkness, where there were hands reaching in the anonymous dimness and groping out for me. I like it that way.

I didn’t say anything, just exited the bookstore.

That evening in the crowded balcony of the Variety Photoplays, I bit my lip each time someone approached in the darkness, imaging hopefully it was the man from the 8th Street Bookstore coming near my seat…but it wasn’t.

Mykola (Mick) Dementiuk is the author of Times Queer, Vienna Dolorosa, and the Lambda Award Winner of Bisexual Fiction Holy Communion (Synergy Press). Ten years ago, he suffered a stroke while in the process of working on his novella My Father’s Semen (STARbooks Press anthology Cruising for Bad Boys) and now writes with one finger of his left hand, his right arm and leg paralyzed. His ebook, Dee Dee Day, about an elderly transvestite in NYC in the 1970s was released recently (eXtasy Books). His to be released ebook Variety, Spice of Life is about transvestites who teemed Variety Photoplay movie theater on the Lower East Side in the 70s. MykolaDementiuk.com