At 18, he moved to Los Angeles and attended art school before he was drafted into the US Army in 1949. After leaving the army, he pursued a career in advertising in LA, Hawaii and New York City before turning to publishing in the fledgling gay media.

He founded and published Drummer magazine in 1976—a magazine that celebrated the masculine gay male while embracing the literary values of the Evergreen Review, a publication famous for sexy, counter-culture content.

As president of the Homophile Effort for Legal Protection (H.E.L.P. Inc.), he helped stop police raids on gay bars in Los Angeles. Until that time, those arrested copped pleas and paid hefty fines that the benefited only extortionist lawyers. 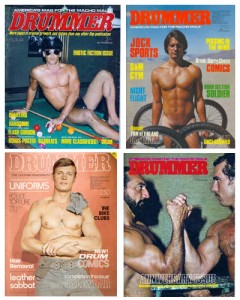 He pissed off Chief of Police, Ed Davis, who was out to get him and raided a Drummer party in Los Angeles with squad cars and police helicopters. The outrage solidified the gay community in Los Angeles and stopped raids on bars.

Drummer magazine gave gay men across the country, especially gay men in small-towns, masculine images of themselves and not the stereotypes presented in mainstream media. Through their encounter with Drummer, many gay men realized that there were others like themselves “out there.” At the same time, the magazine highlighted gay leather bars and businesses and gave those establishments a national venue and included some outstanding writing.

John Embry is a true hero of gay male eroticism.