It’s nice to see Robert Kirby back on the comic book scene, both as an editor (Boy Trouble) and an artist (Curbside Boys). His intro to Three explains the power of three: three muses, Three Musketeers, three wishes, beginning, middle and end, and queer as a three dollar bill. It’s a nice jump into the work of the artists in this debut issue, and what looks to be an intriguing series.

Eric Orner (The Mostly Unfabulous Social Life of Ethan Green) opens with a strong story that’s both travelogue and mystery, “Weekends Abroad.”  The tale is part of, as the artist explains, “the last couple of years, which I’ve spent living, working and being illiterate in Israel…” Although he lives in Jerusalem, he tries to escape on weekends to Tel Aviv, where the attitude is less uptight. He wanders around exploring the city and its cruising scene at night. When he discovers weird vertical graffiti, he images up possible guys who might have wrote it. He hooks up with a guy, the date goes sour, but not the night; he wanders across the beach, back to the hotel, and through the dark city.  Another night he discovers more graffiti on a park bench. A shriek in the evening terrifies him, until he realizes it’s only a rooster. At the end of the strip he stumbles on the graffiti writer, whose identity only leads to more questions.

Orner’s strip captures the feeling of being a stranger and exploring a country where even the most mundane things seem new. His art shows the landscape the words don’t describe, taking the reader along as a vicarious traveler. This strong story made me want to read more; Orner’s eye for intriguing detail would make him a good travel host in any city.

Joey Sayers’ (Just So You Know) comic is a fun riff on the frustration of not being able to use the bathroom when you most need to go. She’s at her job as a gardener with co-workers, but they feel shy about asking the client if they can use the bathroom. The client grants her the privilege, but not without asking, “Did you flush?”

“You should have told her you left a big turd in there,” an incredulous co-worker suggests. This is lighter than Sayers’ recent books, which deal adeptly with many of the difficult issues that arise around transexuality.

Robert Kirby’s comic is a travelogue too, of sorts, only this one resurrects his character Drew (from Curbside Boys) in a quest to find himself. Tired of being ignored by his ex-film studies professor boyfriend Mitch, Drew wanders off into New York City, wondering if he could ever disappear. He remembers as a kid, hiding in trees or under the sink as a kid, with no one aware of his whereabouts. Swallowed by the city, he feels his identity wash away, and the possibilities open up. He could be anyone.

A confrontation with a three-legged dog in the park makes Drew consider the nature of handicaps and returns Drew back to reality. Back at the apartment, readers see Drew really did disappear; Mitch hasn’t even noticed he was gone.

Although the Drew in this comic is young, the story seems one of those midlife realizations, about how fate foists difficult life situations on people. For both Drew and the three-legged dog even disappearing won’t change an ill partner or bring back a missing limb.

A final note, like Kirby’s Boy Trouble collections, it’s great to see another collection that allows LGBTQ artists to explore issues including but not limited to sexuality. Check out this comic triumvirate, which promises to provide a forum for both these talented artists, and others to come. 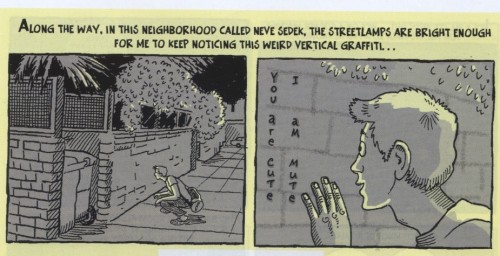