Novelist T Cooper had a dream that Sarah Palin was shooting polar bears from a helicopter “Nam style,” he said at a recent reading at Bluestockings bookstore in NYC. Out of that dream, “Beaufort” was born: a Holden Caulfield-esque polar bear that is forced to leave his ice floe and lands in Hollywood. There, he and Leonardo DiCaprio film a buddy flick together and “people started talking Oscars.” Beaufort even dabbles in Scientology, the Kabbalah, and meth-addicted models.

The question is: Can a small-town bear take on the Hollywood high life?

He still keeps a place in the city but T now lives upstate with his family, which he described as, “Tex Watson, Leslie VanHouton, Squeaky Fromme, and Charles Manson. Or: my wife Allison, our kids (ages 8 and 10), a pit bull named Milton, a pit bull mix named Rosie, and a cat who for a cat is entirely righteous, but is nevertheless a cat. I hardly remember him sometimes.”

Cooper’s previous works include the novels Lipshitz Six, or Two Angry Blondes and Some of the Parts.

Here, Cooper talks about his family, the collaborative process of working on a graphic novel, and his secret identity as a Hollywood bigwig.

Did your family fall in love with Beaufort?

And as far as my wife goes, she also claims she’s on Team Beaufort but she’s likely just humoring me. 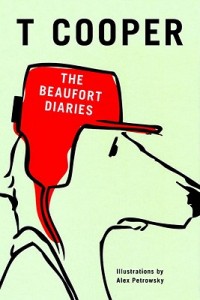 Read our review of 'The Beaufort Diaries'

The Beaufort Diaries is long way from your novels Lipshitz Six, or Two Angry Blondes and Some of the Parts. How did Beaufort come to be?

Fifty told me to go ahead and switch the style up, and if they hate, then let ’em hate, and watch the money pile up.

The illustrations—which look almost like painted Polaroids with pop-out cartoons—seem to be the ideal backdrop for a polar bear who’s feeling a bit out of place in the world. How’d you find your illustrator and what was it like working together?

The stranger in a strange land feeling is pretty much what we were going for with the visual landscape, though it turned out better than I could’ve hoped or imagined.

I actually found Alex Petrowsky, my illustrator, on Craigslist. I posted an ad saying I was seeking an illustrator to collaborate on a graphic book project, but that I had no idea what might ultimately happen with it, so if folks were going to get in touch and ask precisely how much money they’d be making, then it wasn’t going to be the gig for them.

I got tons of responses from all over the country, most of which contained some version of the question: So, how much am I going to get paid? Which I totally understand—nobody wants to work for free or without a guarantee, but I just didn’t know at that point.

Anyway, Alex was one of only two people who didn’t ask about money. I liked his portfolio the best, and so I told him a little bit about the character and story, and asked him to send me some sketches of his take on Beaufort; they were amazing so we went from there, working on just the first ten pages of the book.

I was writing the story with each specific illustration I wanted in mind. So when we suddenly had to finish the book because my publisher in Germany wanted to publish it (it came out there first), Alex and I sat down for a few hours together in person and went over the outline I had: specific ideas for each of the scenes he’d be illustrating, plus some source material I really wanted included (like the Scientology e-meter, Kabbalah bracelets, the gay leather bears Beaufort meets in NYC, etc.)

Contrary to what usually turns up from Craigslist ads, Alex turned out to be amazingly uncrazy and easy going. He’s also incredibly talented and fortuitously like-minded as far as politics and aesthetics go—an overall quality person. He’s more than just my illustrator; he’s my friend!

Before writing Beaufort, were you interested in graphic novels?

Yes, but I wouldn’t say I was a hardcore fan or anything. I also never really thought I’d write one until I started conceiving of this book. I think I have some sort of dyslexia, where it’s hard for me to comprehend the more traditional strips—where there are characters talking with mouth bubbles and all that. Though I do believe Maus is likely one of the top 20 novels of all time.

You write about Hollywood like an insider. And you’ve got David Duchovny as the narrator for the animated short and Téa Leoni’s big blurb on the back. Do you have a secret life as a Hollywood mogul?

Well, it is a little known fact, but I can break it here for the first time ever: I am in fact the genius behind The Jersey Shore, all of the Real Housewives except Atlanta, Hoarders, and Dance Your Ass Off.

The Beaufort Diaries is non-stop funny. But Beaufort’s also suffering from some serious alienation. Was this outsider-ness something you wanted to dig into?

Yes. But the feeling of alienated outsider-ness is so sad to me that I cannot seem to talk about it without getting choked up.

Some short fiction, some non-fiction, and a television series for Showtime. I’m also working on my anger issues and inferiority complex.