I did not know John Stahle well.  Sometimes I wonder who among us really did.  But a picture has been forming since I learned of his death.  Reading back over the emails John and I exchanged the past year, to the handful of times we met—an outing to the Noguchi Museum and Socrates Sculpture garden, a Wilde Boys gathering, dinner at a Chelsea diner—I was struck by his generosity and wit and ability to “dish.”  Qualities reaffirmed by the numerous tributes I’ve read from those who also had the pleasure of meeting John.  And now after recent email exchanges with his sister, his life has taken shape for me like a kaleidoscope, a fitting image given John’s kaleidoscopic vision when promoting the literary and visual arts. 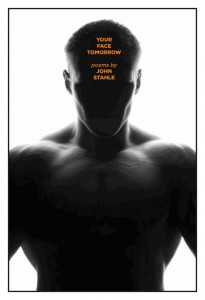 Who was John?  John Stahle was a writer, photographer, graphic designer and the editor of Ganymede, a journal based in New York City devoted to gay men’s art, literature and culture. Ganymede ran for seven issues, placing features from prominent queer writers alongside stunning portfolios of black & white photography, and devoting lengthy sections to up-and-coming queer writers and poets.  The journal spawned two anthologies: one devoted to the poetry of the first six issues, Ganymede Poets, One; and one devoted to the fiction from the first six issues, Ganymede Stories, One.  John published two books of his own work: Your Face Tomorrow (2010), a chapbook of poems; and I Was Like (2008), which included micro-fiction, essays, photographs and poems.

John was born in 1950 and was the youngest of three children.  His father was an Army Air Corp pilot in the Air Force, flying B-17s with the 15th AF in Italy during WWII.  As with most military families, they were often relocated from base to base around the country, traveling in an old Kaiser and pulling a trailer (in a time before air conditioning and interstate freeways!).  John was born in Austin, TX, and subsequently lived in Tampa, FL; Shreveport, LA (a period in which he wanted to be a nun, tying a towel around his head); Columbus, OH (his Zorro phase from the hit TV show, dressing as the man in black); Madrid, Spain, where John stayed until 10th grade, when his father transferred to the Westover AFB in Chicopee, MA.  He finished out high school at Cathedral High in Springfield, MA in 1968 and went to Fordham University for college where he studied Philosophy. 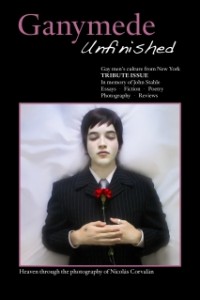 John graduated from Fordham in 1972, the same year his father died of pancreatic cancer, and rented the apartment in which he would live the rest of his life, up on 105th Street.  He had post-grad training in graphic design at the School of the Visual Arts here in New York, and held a series of high-profile jobs in design, first as a graphic designer for the Boys Club of America National Headquarters, then as Art Director for Planned Parenthood National Headquarters, and as Design Director for WNYC (New York’s National Public Radio station).  In 1986 John went freelance and provided graphic design services for numerous non-profits, arts organizations, publishers, and self-published authors.

John died in April.  I heard the news in May from a mutual family friend, Robert C. Neville (“Bob”), Professor of Philosophy, Religion, and Theology at BU. Bob officiated at my sister’s wedding two years ago, and taught John many years earlier at Fordham. When I heard the news I found few others who had heard.  And when I broke the news I was overwhelmed with the response.  With the help of two fabulous gentlemen, Bryan Borland and Philip Clark, we made a tribute site for John where people could go to pay their respects: www.rememberingjohnstahle.com.  You will find many tributes from some of the poets and writers who most recently knew him through his Ganymede enterprise.  You will find tributes from emerging visual artists who knew John when he was more active in the art gallery scene in the years prior to Ganymede.  And this seems fitting, that even in death, John is doing what he did so well in life: introducing writers to each other, writers and artists to each other, creating connections and community.  And yet even with all the tributes, discovering traits like his love for cute boys and opera, to “dish” and dine, to attend openings and exhibits and salons, to his lifelong friendship and collaborations with the art historian Irma Jaffe, the man still remains a bit of a mystery to me.  A bit like those images in a kaleidoscope.

I’m not the only one who has thought of a kaleidoscope when reflecting on John.  To quote my new friend Philip Clark, John’s “mind was a kaleidoscope, and his intelligence a tall ship always going towards another fantastic shore.”  And was it.  Derived from the Ancient Greek, the word kaleidoscope literally means “observer of beautiful forms,” and what better word sums up John’s vision.  In his own work, in promoting the work of others, in the reviews and photographs and poems and stories he selected for Ganymede, in his desire to cultivate taste in his readers and viewers, to not only celebrate us, but through the celebration and juxtaposition of our work, make us all better individual kaleidoscopes, we owe much to John.

Come help us celebrate John and Ganymede at a memorial tribute on Saturday, September 18th, 2:30pm in the Lerner Auditorium (Room 301) at the LGBT Center, 208 West 13th Street here in NYC.  Check out www.rememberingjohnstahle.com for more details.  You will find many tributes posted there and are more than welcome to post your own.

And though the Ganymede site and John’s website have expired, his storefront is still up on Lulu where you can purchase back issues of Ganymede, the Ganymede anthologies of poetry and fiction, and the two books of John’s own work.  For those interested in the tribute issue Ganymede Unfinished edited by Bryan Borland, purchasing information is available here.

Sincere thanks to John’s sister, Kathy Stahle Drummey, for providing details about John’s early life and career, and to Bryan Borland and Philip Clark for helping me ensure John’s legacy lives on.

Matthew Hittinger is the author of the chapbooks Pear Slip (Spire Press, 2007) winner of the Spire 2006 Chapbook Award, Narcissus Resists (GOSS183/MiPOesias, 2009), and Platos de Sal (Seven Kitchens Press, 2009). His work has appeared in many journals and the anthology Best New Poets 2005. Matthew lives and works in New York City and you can read more of his work at www.matthewhittinger.com.