What I Read in Place of My Summer Vacation:

Neil Plakcy starts his latest North African-based romance, Dancing with the Tide, with a literal bang between his two muscular and handsome heroes, Liam McCullough and Aidan Greene.  Plakcy said, “The first book, Three Wrong Turns in the Desert, began as an action-adventure novel that just happened to have gay characters. 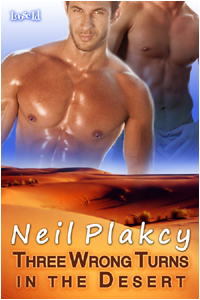 And how!  In this sequel, the sexy professional bodyguards and committed lovers Liam and Aidan, spend almost as much time bonking each other as they do protecting their charge, the Muslim pop singer, Karif Al-Fulan.  Liam and Aidan are hired by Karif’s record company to watch over the sexy young singer when a fatwā is issued against him after he comes out of the closet—just as he is about to break into the world music scene.  But it turns out that Palestinian politics may have as much to do with the assassination threats as Karif’s sexuality.

In the first Liam and Aidan novel, young English teacher Aidan Greene was something of a Hitchcock innocent caught up by accident into intrigue and adventure when ex-Navy SEAL and professional bodyguard Liam McCullough mistook him for a client he had arranged to meet in a Tunis gay bar—think James Stewart in “The Man Who Knew Too Much.”  The client ended up dead, and when Liam asked Aidan to impersonate him, the two were soon on the run through the Tunisian desert.

Aidan emerges in Dancing with the Tide as a more confident and well-trained assistant to Liam, though he is still uncertain of his ability to hold his own alongside the more muscular and experienced Liam.  His lack of experience haunts him throughout the novel and threatens his trust in Liam’s love.  Especially after he catches their handsome Arab client kissing Liam in the pool shower at their private villa on the island resort of Djerba where they have sequestered Karif for his own safety.  The rich young man’s horniness leads them all from one near escape from death to another.

“Too bad one of us can’t just fuck him,” Aidan says, testing Liam.  My feelings exactly!  Liam isn’t amused: “Excuse me?  Are you saying you want to fuck the client?”  Aidan responds, “No.  I know that’s against the rules.”  Plakcy says that he kept Liam and Aidan monogamous in the face of Karif’s petulant sexuality because, “I wasn’t so much sticking to the tropes of the romance genre as to my own romantic heart.  I’m a one-man guy, and I believe that sex is best when it’s with someone I’m in love with.” 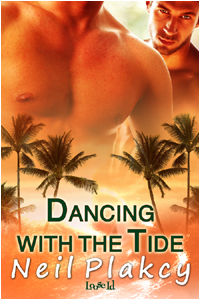 Karif manages to elude Aidan in the souk, the crowded Arab marketplace, and Aidan finds him giving a blow-job to a young British bloke in an alley.  Gavin, the beefcake Brit, seems sweet, but he carries a secret that will challenge Liam and Aidan’s ability to protect Karif.  Plakcy says, “I still think of these novels as action-oriented” and the eruption of the romance between Karif and Gavin in the midst of the deadly intrigue of Middle Eastern politics threatens the lives of both couples and accentuates Aidan’s anxiety about his competency as a bodyguard.  Aidan reflects:

Falling in love is like dunking yourself under the waves…you always have to watch the tides, because they’ll sweep you into trouble if you’re not careful.  We were all in danger that way, I thought.  Karif’s death threats.  He and Gavin in the first throes of love, where anything can happen.  Even Liam and I had to be cautious not to get swamped when trouble arose.

While Plakcy keeps the reader cringing from possible assassination attempts throughout the book, he doesn’t forget to evoke the sensual “orientalism” of a romance set in North Africa, even in minor details.  For example, when Aidan tries on a chain in the souk, the necklace is “so light it felt like I was holding water, and the gold glistened through the dark hair at the top of my chest.”  Likewise, he continues to develop the characters of our two heroes, especially Aidan’s, revealing some disquieting background about the young man’s natural talent as a bodyguard.  Aidan tells us that after he broke up with a college boyfriend, “I obsessed about him for years afterward, looking him up in phone books and computer databases…I liked the idea of knowing where he was….”

Plakcy handles the politically explosive elements of his story lightly, but intelligently.  In a conversation between Karif and Aidan about the reasons why a fatwā has been issued against the young man for being gay, Aidan says, “I used to think that every guy who hated gay men was a closeted queer himself…But living here…I think a lot of people are scared that their imams have sold them a bill of goods—that Allah doesn’t punish heathens and reward the virtuous.  And that makes them want to reach out and hurt people who live with more freedom than they do.” 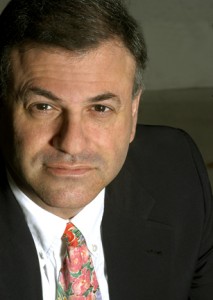 Though Karif is in many ways petulant and immature, Liam and Aidan note his courage in coming out when they discuss the political process of being outed.  Liam says, “If you’re a public figure, like Karif, you can either get dragged out unwillingly, make a statement, or if you’re very lucky, let it happen without anyone making a big deal.”  Aidan replies, “But once you take that first step, and you admit it to yourself—you can’t go back from that unless you’re ready to start lying.”  For all of his petulance, Karif has the courage of his integrity.

But, of course, this is a romance, not a political thriller, so like Aidan, “I kept having to remind myself that we weren’t on vacation, that this was a job—with deadly consequences if we failed.”  The more mature Liam and Aidan are the Dr. Quest and Race Bannon to Karif and Gavin’s Johnny Quest and Hadji.  In the attempt to occupy the spoiled Karif and keep him out of trouble, Liam and Aidan distract him with quad motorcycling on the beach, kite surfing and lots of skinny dipping; that is, when they aren’t lounging about in luxury resort hotels and villas.  Plakcy’s Tunisia is the perfect exotic locale for your fantasy summer vacation, if you don’t mind dodging an assassin or two along the way.

'A Keen Edge' by H. Leigh Aubrey
'Time After Time' by JP Bowie & 'The Rest of Our Lives' by Dan Stone
One Walk in Winter by Georgia Beers