I consider Richard Labonté the Dean of gay pornography.  I met him years ago at A Different Lights Books, which he managed when it had books of substance and was the place our community met to plan the next demonstration.  Sadly, the store now is another of the rainbow five-and-dimes on Castro Street with glossy photographs of naked men, hard-on magazines, a limited selection of books, and the gifts you’d give someone if you really needed to tell them how gay you are.  Richard encouraged me to keep writing and was polite enough not to say my writing had the excitement of unused toilet paper.  Muscle Men is the second of his collections that I’ve read since beginning this assignment.  In his introduction he gives us permission to touch the muscle comics and eroticize the writer of the “balls-on” essay on obsession with body building. Not a bad place to start.

The cover makes clear the book is gay pornography, with a well-built man in white trunks holding his head with both hands and looking up.  Either he’s closing his eyes to protect them from the sun or he’s regretting that guy he went home with last night, who said he was a top but turned into a bottom the second he kissed him. 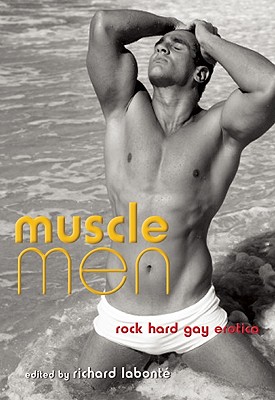 I should say up front that Muscle Men never got precum in my shorts. But I love watching the muscles of a man in motion, like one who’s over me and deep in my butt, so I tried to approach these stories objectively.  I took the book to Firewood Café and ordered the half herb roasted chicken—probably the best deal in the Castro.  The place is quiet and a good place to read, and it was fairly empty at 11:30 AM. Two burly guys were at one table and an earnest looking guy about 40, wearing one of those floppy canvas hats I associate with George H.W. Bush, was at another.  There was enough food to sustain me through three chapters.  If you want to know the ins and outs of body building competitions, read Parts 1– 3 of Jack Fritcher’s Muscle Worship: If I Said You Had a Beautiful Body, Would You Hold it Against Me? If you want some of the sex, read Part 4:

With those Big Guns lifted high in full frontal display of arm muscle, feel them again. Feel the density of each striation as it’s gathered down into the depths of muscle armpits rich with the heavy male scent of bodybuilder muscle sweat. After a bit of 420 smoke and popper, you find your nose exploring the heights of those pits….

In our community, Jack goes back as far as I do. I met him through my first partner when Jack was living in Michigan back in the days when black leather scared me (I’m better now). He is the founder of the late lamented Drummer magazine and the author of Some Dance to Remember.

When I saw the next chapter in the collection, Thunder and Lightening by Cage Thunder, I thought our community had come far enough that our writers of pornography didn’t need pornographic pen names. When I discovered Cage is the person telling his story as a wrestler who gets videotaped beating up other men, I knew I was comfortably back in Gay Fantasy Land.  The story is classic gay pornography and you don’t have to read far before a scene like this where two men have beaten each other up with punches, take downs, and choke holds:

I jumped to my feet and stomped his steel abs. He doubled up, grasping and choking. I jumped onto them with both feet, and that was when I noticed his dick was hard.

It was beautiful cock, long and thick over a set of heavy balls. He had trimmed his golden public hair to fuzz.

Only gay men notice pubes shaved to fuzz.  I can’t imagine a professional wrestling superstar getting hard in the ring, but in our world we can get hard right there in the ring looking at men we’ve dropped to the mat, or in a softer story, dropped into our sling.

The richest story was The Ambivalent Gardner and the State of Grace by Jamie Freeman.  It starts with women that would put Desperate Housewives to shame, talking about a neighbor. Freeman’s attitudes and the language of the women reminded me of Tennessee Williams.  It’s also a story of self-revelation as a married man with a son acknowledges his love of men.  Using the word clumsy to describe part of a sex scene made it more believable, just like seeing the outline of a man’s dick in his underwear is sexier than seeing him naked. The story has a nice symmetry of broken glass on the floor in an early scene where he’s fed up with his old life and broken glass on the floor when his son tells him to pursue his new life.

If you’re into violence, there are stories here for you.  For midnight masturbations there are plenty of rock-hard muscle bodies drenched in sweat and the occasional moment of affection. It’s a niche book, so if that’s your niche, crawl in and grab your lube. After you’ve read it and gotten into the shower you’ll have memories of Labonté’s bumpy ride of biceps, triceps and glutes to revisit on those nights when your date cancels after you’ve spent an hour cleaning out. 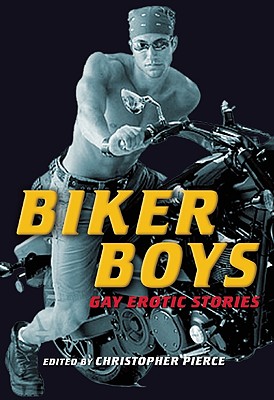 Biker Boys is edited by Christopher Pierce, who lives in New York City and is the editor of the Fetish Chest anthologies and collections like Erotic Stories of Time Travel, among others.  It’s a collection of stories about men and their bikes.  Reading it, I remembered days on my Yamaha VMax riding on the twisting road that runs down from Skyline Drive to San Gregorio on the San Mateo coast, taking the curves at twice the posted speed.  I had sex in the garage leaning against my bike and lying on the seat a couple times, but never with a biker I met on the road.  My love affair with the bike ended when an SUV plowed into it and my left leg in front of the Safeway on Market Street—not the most romantic setting.

I opened the book to Number 023 Of The 200 Made, about an Italian named Basilio and his limited edition Vespa Zafferano.  I got sidetracked when the story had the scooter recently delivered from England. The story was set in Italy and Vespas are made by Piaggio in Italy. OK, so maybe they customized it in England and forgot to tell us, I don’t know, I just I wanted to get on to the Appian Way where the author, an American, has sex with Basilio and his Vespa, literally. I have to admit this was my first experience with scooter sex. Until then my idea of scooters in Italy was Audrey Hepburn in Roman Holiday gallivanting around Rome with Gregory Peck.

Tulsa by Dusty Taylor gets right to the meat in the first paragraph.

The ride is incredible. There’s sweet spot vibrations at 6500 rpm that gets right inside my recently plowed ass. It comes up through the engine and revives the bite of Rico’s massive tool…

You gotta love a story with recently plowed ass and massive tool in the second sentence.  I’m not going to give away the ending but Rico plays a large part in it.  The stories in this collection range from a Daddy and boy and his first motorcycle, to Hog sex with a newcomer tied up and molested at Sturgis—America’s annual gathering of greasy long-haired Harley riders and their machines—fueled with beer and cigarettes.

To let you know something about me, I’m sharing something from a novel I’m working on about San Francisco in the 1970’s.

Stoned and lying on the soft down comforter Sam saw an angel with wings soft and firm enough to penetrate his ass.  One wing slowly entered him sliding smoothly and tickling the lips of his ass turning his second ring into an unending circle of electric pulses.  The wing arching over his ass was lit with sun streaming through a break in the curtains and the other wing, broken and almost skeletal jerked back and forth as if trying to escape.  He looked at Jakob’s face, the beard and the deep set eyes glowing over him.  They spoke through their eyes, and as the wing went deeper Jakob’s smile filled him entirely.  He was a father. He was his father, the father he’d loved so much as a kid and died before they knew each other. His memory of his father was a Polaroid snapshot dark and muddled but this father was alive, intent on pleasuring him and taking nothing for himself.

Paul Russell: Merging Fiction and Fact
‘The Padisah’s Son and the Fox’ by Alex Jeffers
'The Lurid Sea' by Tom Cardamone