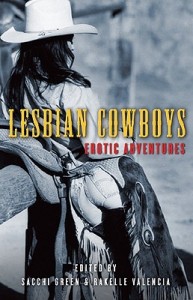 But of course, I have to disagree. It has everything to do with gender.

I know what they both mean, though: they mean men and women—they mean cowboy does not necessarily mean a cisgender man. But this collection of erotica is full of genderqueer cowboys, dykes, crossdressers, even possibly a trans guy, though the characters in these stories never identify themselves as such, partly because some of the stories are period and set in a time when this language didn’t exist. Possibly also because the authors, or even the characters themselves, do not have this kind of language.

None of the stories came across as particularly smart about gender theory or politics or identity, but all of them have specific life experience of what it’s like to be different: masculine and a “woman” in a man’s world and in a man’s profession, or feminine and a woman in a man’s profession. There are femmes and butches, women who pass and those who don’t want to, women who feel the need to prove themselves capable despite their gender, trans male characters who go by he and him as his chosen pronoun, and even a leather “phallus” strap-on in a scene in a brothel.

I am quite fond of “The Hired Hand” by Delilah Devlin, which is sexy and tense, about a woman who comes looking for work at a ranch and proves she is just as capable as any man would be. In many of the stories, I like the tough American accents, vaguely southern but also just western, I like the descriptions of the landscapes and rodeo circuits, the mountains and connection to the land.

It’s a lovely collection, and if you like gender play (and butches or masculine women) in general, there aren’t a lot of lesbian erotica collections exploring those dynamics and this is definitely one of them.

'The God of Longing' by Brent Calderwood
'Spoiler Alert: The Hero Dies' by Michael Ausiello
'Autobiography' by Morrissey