Michael, a graphic designer from Los Angeles, is bequeathed a large sum of money along with property on the English countryside. He soon learns the house was the former home of his gay uncle, whose partner died under mysterious circumstances and whose ghost supposedly still resides there. Determined to solve the mystery of his uncle’s partner’s death, Michael befriends the town librarian and longtime resident, Miss Ballard, who knew both his uncle and his partner.

This gay romance fantasy adventure is a mixed bag of steamy erotica, magical love story and intriguing murder mystery. The story is engrossing, the author’s prose is near perfect and even the cover art, featuring profiles of both men and a sketch of the haunted house, is sublime. 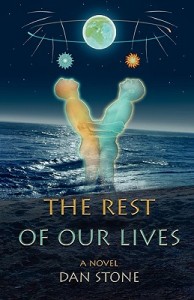 The presence of ghosts and the influence of the dead upon the living is a resounding theme in Time After Time. Dan Stone’s New Age romance novel, The Rest of Our Lives, goes one step further with its profile of young couple, Colm and Aidan, two modern-day wonder twins who claim to have first met thousands of years ago and always manage to find each other again.

Colm and Aidan are witches (they feel the term warlock has been tainted by Harry Potter) who can freeze time, much like Samantha in “Bewitched.”  Both can also control temperature; Colm’s specialty is ice, while Aidan’s is fire. The two men from DC meet by accident when Colm spares an infant from injury during a Pride event and Aidan witnesses his talent. Colm flees when he becomes aware that Aidan is immune to his power, but manages to avoid him for only so long.

With the help of Aidan’s hypnotist Aunt Lu, the two travel back in time and realize they have known each other in past lives, throughout history, even on occasion as a man and a woman. Colm notices a pattern in their past relationships that unsettles him—Aidan always ends up leaving him.

New Age fans may enjoy this couple’s journey of discovery, and while their courtship in the first half of the novel is mildly entertaining, the latter half, especially when Colm returns to his hometown to visit the dying aunt who raised him, borders on ludicrous. But again, fantasy is make believe, where anything is possible.

‘Heart Block’ by Melissa Brayden
In Remembrance: Ethan Day
'End of the Rope' by Jackie Calhoun

Chris Verleger was born and raised in New York City and attended college in Boston where he earned degrees in journalism and higher education. Now a resident of Providence, Rhode Island, Chris reviews books and local theater for the Edge media network.