Timothy Mulder’s memoir Moments and Milestones began with Timothy posting chapters to his Facebook profile.  There, he connected readers to Amazon’s Kindle where readers could download parts of the book by the chapter.  Timothy is a scientist who had “just become acquainted with affirmation and validation that had been operative my entire life.” He’s also a writer searching for his elusive self with a fair share of pain and pleasure.

There is a small tube that runs from the end of each testicle through a man’s scrotum to connect to his urethra . . . this structure had been weakened during my bout of hysterical sweeping. When I  masturbated the following morning, the resulting force of the ejaculation almost completely tore the tube which accounted for the stabbing pain, the swelling in my scrotum and the blood in the ejaculate …. 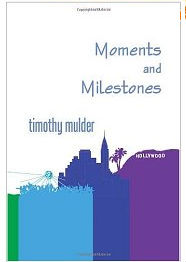 Though K wasn’t a pain blocker, its disassociating effects did provide the pain avoidance…

Timothy fills 450 pages with days, some with cash and some without it, on drugs and clean, living alone and with men he loves.

Chuck was a bit of an enigma.  He was at times completely self-absorbed, but on other occasions, was equally determined to make me happy and   draw me closer emotionally.  I had been so emotionally and psychologically exhausted by the last several years of hardcore partying and the seemingly endless drama of my relationship with Mike that I remained steadfast in my resistance to further my romance with Chuck for the first several weeks.

Timothy’s recollection of details is impressive.  He’s crammed a lot of life into his years and remembers most of it, acknowledging that his mind was blown some of the time.  The titles of his chapters give a quick survey:

Here’s a moment in Australia:

Stepping into the front room I found Craig there, standing just inside the front door.  He was talking to a friend but caught my approach out of the corner of his eye.  He turned to face me and smiled.  I walked up to stand directly in front of him and he spoke his first words to me,

“You’re not leaving, are ya?” he said, sounding concerned, though the smile never left his face….

We had spoken only a handful of words to each other. But I felt I knew this man better than anyone I had ever known in my entire life.

Timothy scales emotional peaks, and like characters in Greek tragedies he must fall; in his case, a recent cancer surgery.  I had lunch with him a few weeks ago and I’m pleased to report he’s recovering nicely and ate a balanced meal, except for the Pepsi substitute.

The next book, NTOUCH, is a small one of twenty-five pages. It’s stapled together, the kind of book that can be made at home or Kinkos.  It comes from BentBoyBooks.  I received three of their books. Each is interspersed with photographs from early physique magazines, historical shots of San Francisco and early Twentieth Century pornography.  NTOUCH, a bar story tells a tale of a boy’s search for the perfect Asian bartender he meets at the R&G Lounge.  It’s short enough for a ride on Muni.

The cute go-go boys and newly arriving boys provide pleasant distraction. He likes watching the boys strut down along the bar and spill out onto the dance floor full of energy and excitement.  The regulars always come in just before eleven.  Right on schedule the old queen in the classic seventies drag strolls in head turned defiantly up, quickly followed by “the “hobbit,” a small grinning bouncing boy who appears suddenly, tears off his shirt and dances…..

It takes friends, searching the Internet, and sites like this to find books written by budding gay authors. They are out there and worth finding.