At the end of the day, when the big parties are over and when youth has long since vacated our material bodies, we sometimes look for life’s deeper meaning: Why are we here? Is the journey of life just a climb for success, status, wealth, and getting laid?

People experience spirituality in different ways. I like to compare it to the highly individualized nature of fingerprints: For some it’s necessary to join an organized religion, while others refer to themselves as unchurched spiritual beings.

The first to arrive was an interesting tome I read on a New Jersey beach. Queering the Text by Andrew Ramer kept me from going into the water. Imagine traditional Jewish texts—or the three thousand-year history of the Jewish people—superimposed with stories from contemporary life. Ramer takes classic texts like the story of Ruth and Naomi, David and Jonathan, and improvises, elaborates, or moves the story into a present day context. Or he’ll take a quote from Esther—“Thereupon Esther summoned Hatbach, one of the eunuchs whom the king had appointed to serve her”—and expounds upon that by imagining himself as Esther talking with the eunuch late at night. 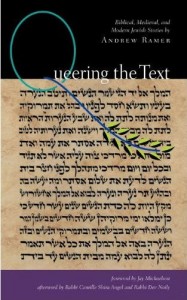 “Nights when everyone was asleep, we would sit up talking like two sisters, sipping spiced wine and telling stories….the stories I liked best, about the men he met in the market, their homes, their gardens, their beds, those hungry lovers of a single afternoon…”

There are satirical flourishes that put one in mind of Jonathan Swift.  In the tale The Commandments, for instance, Ramer has a very different sort of Joseph ruminating on perceived antigay Old Testament laws.

Pontificating, Joseph announces:  “‘You shall not lie with a man as with a woman.’  It’s simple. When I’m with another man, I do it standing. Or kneeling.”  Patriarchal Abraham replies: “Not me. It’s the young ones I’m after, so as far as I’m concerned the commandment doesn’t apply to me. I’ve never been with another man. Just boys.”

These small stories, besides covering a wide range of emotions, include interactions with early Christians (“That he’s Christian does not bother me. I would convert if I thought he would kiss me”) and the Moors. Ramer’s juxtaposition even includes poems, such as, “Remembering Spain,” when Jews there were free to “kiss other Jewish boys and men/With lust, love, need, and with fidelity.”

Ramer’s Old Testament world, infused as it is with a queer imprimatur, is a delightful, even surprising read, perfect for those sporadic moods when you want to queer the text. 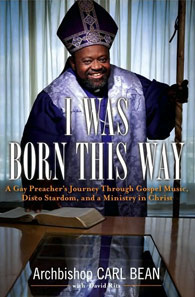 On the Christian side of things, there’s I Was Born This Way, by Archbishop Carl Bean of the Unity Fellowship Christ Church in Los Angeles. This unlikely gay minister takes the reader on a journey through sexual abuse, racism, gospel singing, a brief incarnation as a Motown disco diva, and then finally as an ordained minister.

Bean tells the story of his growing up in Baltimore as a likable, chipmunk cheeked “cutie” whose cuteness attracts the unwanted attentions of many of his older male relatives. These down low abusers come in many disguises: favorite uncles and one of his mother’s boyfriends. The men use him on a regular basis, but amazingly, young Bean manages to process it all until the day he is outed by a neighborhood kid. The news shocks his family, and then the good boy whom everybody loves attempts what no kid or adult should ever attempt: suicide.

In the hospital, Bean meets Dr. Freund, a psychiatrist who tells him it’s okay to be gay. Dr. Freund then warns him “not to internalize the prejudiced judgment of the world.” Bean’s life continues along a bumpy path (he sometimes gets beaten up in the streets by whites). While still a teen, he heads to New York City, alone, and finds solace in the Harlem gospel community.

“That world was gospel and gay,” Bean says, “a subculture where artists, many of whom were extravagantly talented, were also flamboyant.” Bean says he attended churches where he heard his first antigay sermons. “Preachers were saying, ‘Sex between two men is a sin. Sex between two women is a sin….Yet many of those preachers, winking and blinking, were hitting on the gay boys in the choir. The hypocrisy was blatant.” Bean admits he was confused “by the church culture that endorsed the music.”

And who wouldn’t be? It’s no wonder that down the line the archbishop-to-be finds it hard to find a stable relationship.

Bean’s story has all the grit of a Billie Holiday autobiography, sans the drugs of course. His brief incarnation as a disco diva (the 1977 hit “I Was Born This Way” was a Motown bestseller) had people comparing him to Sylvester, though Bean told audiences then that, unlike Sylvester, he had no interest in performing in drag.

What strikes me most about Bean’s book is the author’s lack of bitterness at the challenges life handed him. In keeping with the message of the gospels, he decides that life is not about revenge but rather “loving your enemies and even praying for them,” a novel concept in a world where vicious retribution is sometimes king. 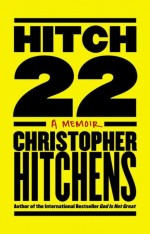 A book that “comments” on the spiritual is Christopher Hitchens’ memoir, Hitch 22. This yellow 435-page hardback has hit bookstores like a bomb with its billboard-style black lettering. Hitchens, to his credit, is not one to mince words. He recently published the international bestseller God is Not Great. In 1995 he wrote an informative study on Mother Teresa (The Missionary Position—Mother Teresa in Theory and Practice), an iconoclastic study that concentrates on the nun’s “un-saintly” side.

Hitchens wrote then: “The true address of the missionary is to the self-satisfaction of the sponsor and the donor, and not to the needs of the downtrodden …It is time to recognize that the world’s leading exponent of this false consolation is herself a demagogue, an obscurantist and a servant of earthly powers.”

Hitchens, as it turns out, was consulted by the Vatican as an unofficial devil’s advocate witness during the Catholic Church’s examination of Mother Teresa’s possible sainthood. (The Second Vatican Council, in its modernization frenzy, abolished the official office of Devil’s Advocate for the sainthood process.)  In this memoir, Hitchens has relatively little to add about Mother Teresa. His comments about religion in Hitch 22 are more like sound bites or the kinds of stylized sly barbs one comes to expect from articulate unbelievers.

The memoir is more political than personal with a lot of focus on English politics. For the average American reader I suspect this is a rather muddled world. You’ll find no soul searching in Hitchens’ world but there are famous names aplenty that make for interesting, if somewhat spotty, reading.  Of special interest to me is Hitchens’ take on the young Bill Clinton (that he was a student spy for the CIA while studying at Oxford), and Susan Sontag (when Salman Rushdie was condemned to death by Muslim extremists for publishing The Satanic Verses, Sontag “stood up proudly where everyone could see her and denounced the hirelings of the Ayatollah”).

There are also accounts of Hitchens’ affairs with boys while still a young man.   He writes that his active bisexuality ended when he got older, since he felt that men no longer found him attractive. Women, however, continued to find him appealing.

Regarding the Jews, Hitchens writes: “The sage Jews are those who have put religion behind them and become in so many societies the leaven of the secular and atheist.” Okay, score another point for the acerbic quip, but this means little really, especially when one can turn around and point to a number of different case scenarios having to do with religious conversion from the halls of atheism.

'The Stonewall Riots: A Documentary History' by Marc Stein
'Slow Lightning' by Eduardo C. Corral
'I Never Promised You a Rose Garden, Part One: My Own Private Portland' by Annie Murphy