Can M/M Romance Challenge the Definition of LGBT Lit?

Can M/M Romance Challenge the Definition of LGBT Lit?

In a world where Lisbeth Salander is tearing up the bestseller list with her clunky motorcycle boots and her refusal to fit neatly into the category of gay or straight, it seems the revival of queer sensibilities has come upon us. This is something that the expanding genre of Male/Male fiction tackles head on. Although these novels are described as gay historical fiction they are (as the press release details) “written primarily – but not exclusively – for women”. This complicates how M/M fits into the genre of LGBT fiction. How does a genre of fiction that is exclusively centered around homosexual love, and largely written by and for explicitly straight writers and readers challenge the typical notion of what LGBT fiction is? Perhaps more significantly, how does it problematize the mutual exclusivity of homosexuality and heterosexuality? 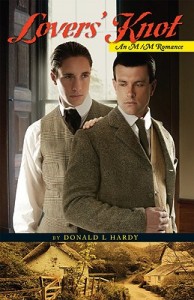 Both Lover’s Knot written by Donald Hardy and Tangled Web written by Lee Rowan are part of this genre. Each of these novels feature male characters that fall in love and must navigate homosexuality in worlds where it is legally and socially forbidden. Set in 1906, Lover’s Knot chronicles the life of Jonathan Williams, a young man who has unexpectedly inherited a farm from a relative. With the newfound responsibility of property ownership, and ghosts of the past that reemerge over the course of the novel, the reader follows along as Jonathan navigates his new life and his deep love for an old friend. Dealing with issues of class more forthrightly, Tangled Web tells the story of Brendan Townsend who traverses class boundaries and age differences in his quest for love. Brendan’s first love interest Tony, a former classmate, proves to lack the maturity that he seeks, and it is not until he meets a significantly older man that he must not only cross class boundaries, but age boundaries as well. Significantly both novels feature mostly chaste main characters who do not seek out casual sexual encounters. Instead, each of the main characters is on a quest for “true” love; a quest that does not veer too much off course from the traditional genre of romance fiction.

Class is of utmost importance in each title; both Brendan and Jonathan struggle to maintain the reputation of their family name. In fact, by the end of the novels neither man explicitly comes out. As it is legally forbidden during the time periods, these men choose a peacefully monogamous relationship that is kept hidden from their families and from society writ large. In Lover’s Knot there are instances where men of lower classes perform their sexuality in public spaces, but for each of the main characters who either come from upper classes or who inherit wealth throughout the course of the book this type of public sexuality is looked down upon. The public/private dichotomy works to reify certain class constructions but it also reveals the precarious line that queer men and women must walk if they want to subscribe to certain norms of heterosexuality. 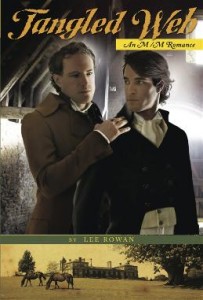 Author Victoria Brownworth responds to this essay and her thoughts on M/M Romance in general. To read click here.

Ultimately I am not trying to claim that there are no political repercussions of having a genre of fiction that purports to represent a version of gay male love that is largely created by and for non-LGBT audiences. Instead, I seek to unravel how this genre works to challenge our notions of what LGBT is, and by extension, what straightness is. The question becomes what defines the LGBT community? Would a white lesbian woman have the authority to write about a black gay man? Would a white gay man have the credentials to write about a straight white woman? Do LGBT authors have inherently queer sensibilities that unite their experiences? Perhaps more important than the question of what makes queerness queer is what makes straightness straight?

The demand for M/M romance novels within a straight community signals a want to challenge strands of heteronormative love. With the wild success of Stieg Larsson it is apparent that there is a demand for queer characters in the mainstream media. This is not a call to abolish LGBT as a category, or genres of fiction that center themselves around LGBT communities. Clearly in a world where Obama cannot mention marriage and homosexuality in the same sentence and where transgender men and women are systematically targeted for murder, there is a need to organize through and around the category of LGBT. But isn’t it time to stop policing the gates of the LGBT community and begin to embrace the queerness that exists in even the most seemingly heterosexual spaces and places? Isn’t it about time that we allow writers to have as complicated identities as the defiantly queer heroine, Lisbeth Salander?

Lizzy Shramko is a queer theorist/reader/writer/sometimes vegan baker extraordinaire based in the space between Minneapolis, New York City and Budapest. A voracious David Bowie fan and a dance enthusiast, Lizzy attempts to dismantle gender norms one Moonwalk step at a time.