What is literature and why do we read it? Some insist that writing worthy of the designation “literature” is a very serious business.  Its content enacts our utopian and dystopian impulses, providing imaginary solutions to real problems while enabling us to critically and creatively examine the failings of our culture and society.  Its form pushes beyond the limits of genre to provide us with new ways of experiencing the world and our place in it.

These aficionados of capital L “Literature” want to be challenged by what they read.  They will find much to appreciate in Best Gay Stories 2009, which does in fact offer some superlative writing that draws on various genres while transforming them:  crime fiction (“A Dry Past”), memoir (“King of Shadows” and, tangentially, “The Chelsea Rose”), mystery (“I Can Hear You Now”), young adult (“Starbucks Boy”), fantasy (“If Angels Fight”), short story (“Best Friend”), essay (“Binding the God”), and prose poem (“Three Scenes”).  The last of these—by Jeff Solomon, Jeff Mann, and Christopher Schmidt—are particularly innovative.

None of these “stories” are easily classifiable and all provide the kind of surprises we expect from great Literature, which is not to say that this is necessarily the “best” gay writing of 2009 (the editor largely eschews mainstream presses and journals—a more accurate title might be “The Best Writing from the Gay Press); that there aren’t some clunkers in this collection (especially a couple at or near the end); and that we couldn’t do without the one-page introduction. 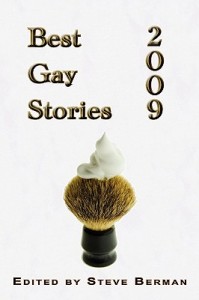 Other readers seek out small-l “literature,” the main purpose of which is to intrigue and entertain.  These readers often turn to genre writing that doesn’t so much want to transcend boundaries as fulfill expectations, whether romance, thriller, or sci fi/fantasy (often called “speculative fiction” these days).  Alleys and Doorways will appeal to readers seeking the last of these.  The collection is strong on creating imaginative speculative worlds, where tattoos come alive, gay couples adopt baby dragons, wererabbits find accepting werewolves, knights bond with their seers, and outcasts find their fairy queens, or where one learns that it’s not always good for one’s wishes to come true.

While strong on speculation, such writing is often less successful as fiction, providing few narrative surprises and overly pat endings: “[H]e really did like his life just the way it was.” or “[S]miling, the clouds parting before him.”  Oddly, the story that stands out from the rest in its aspiration to break beyond the bounds of genre, Valerie Z. Smith’s “The Steel Anniversary,” has one of the most commonplace fantasy endings of all: “And they lived happily ever after.”  However, in Smith’s deft hands, this cliché is drenched in irony—coming after memories of cutting, torture, and rape—and resonates as a hope, a prayer, for an ending that is really a new beginning.  Readers of both literature and Literature will be impressed by the fully imagined world and skillful narrative that Smith provides in less than ten pages.

The other stories in the collection might not have as legitimate a claim on the hallowed halls of Literature, but they are—one and all—good reads, retelling conventional stories of knights and elves, dragons and magic, from a queer perspective.  What a pleasure that Lethe Press has made available a print edition of stories originally published online in which LGBT readers see themselves reflected—male fairy queens, a sweet lesbian couple who are also fierce Sapphic warriors, various partners in same-sex romances—though I do wish that the press had done a better job of maintaining format during the print transformation (nothing can disrupt the charm of a story like random paragraph breaks).  The insightful introduction by Meredith Schwartz maintains that there is an inherent link between fantasy, queerness, and urbanicity in these contributions that negotiate “the fluid boundaries of two worlds, at home in both and neither…learning to find beauty in the once-feared strangeness of ourselves and each other.”

This is a noble goal of both literature and Literature.
——

'Intolerable: A Memoir of Extremes' by Kamal Al-Solaylee
'Circuit' by Walter Holland
'Shaken and Stirred' by Joan Opyr