Stefani Deoul’s The Carousel is loaded with characters you won’t forget, including a mysterious stranger known only as “the merry-go-round lady” or “boss lady.” To say her arrival transforms the small, Northeastern town is an understatement. Deoul’s debut is a close and careful look at what constitutes identity, community, and even spirituality.

Drawn by beaten up carousel horses, the narrator soon becomes obsessed with her junkyard finds. Can she restore them? And in doing so, can she be restored? If they can be made whole again, perhaps she too can contribute to something larger than herself.

Deoul brings to this novel her experience as a widely published writer, the author of short stories as well as producing for television and the big screen. After reading this novel, and seeing Deoul’s unique approach to age old questions, I had a few question for the author myself.

ALTP:  Why do you think the carousel horses, of all things, capture the merry-go-round lady’s focus?

SD: I think we all have those moments, when a flash of something causes us to stop and look twice.  For the merry-go-round lady, in that glimpse, there is an odd burst of clarity — of seeing the ravaged face and body and intuiting, without conscious thought, if she can save this horse, this being, she can save herself. 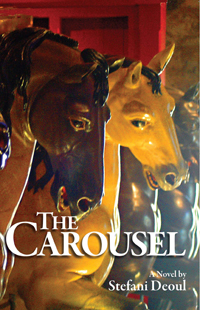 ALTP: I suppose it makes sense to ask why carousel horses have captured your focus.

SD: Ah.  That’s, I suppose, one of my great mysteries – when I’m asked where the story came from.  I can’t actually tell you, other than this is the story that was “shared” with me, from wherever that inspiration comes from.  I can tell you I knew nothing about carving a carousel horse and I spent a great deal of time researching this art.  My friends joke with me — or maybe that’s laugh at me (!) — because unlike the stated adage, it seems I never actually write about something I already know!  There always seems to be a “research required” portion of my work.

ALTP:  As one of the characters asks well into the book, why does she not have a name, aside from the “merry-go-round lady,” or “boss lady?” Is it really for the sake of her privacy? Or is it more because she doesn’t really believe she is ‘anyone’ until the end of the story? Or is it neither?

SD: When we meet the lead, she’s passing through and there’s no reason for anyone to know her name.  But in her core, she is not the person she once was and in that moment she has no identity to offer, so she doesn’t.  And as one person notes, later in the story, the ‘polite time’ for asking has passed and everyone has kind of accepted her need for walls.

ALTP:  Is this a story you outlined in your mind before setting it to paper, or did it develop as you went along?

SD: Both actually. When the idea of the story struck, I knew I had a beginning with a couple of characters and was pretty sure I had an ending.  The interesting part was, I had no idea of the people who would actually come and ‘introduce themselves’ along the way.  So pieces of what I thought would be there at the end are still present, but as the story developed, so too did the resolutions of the character’s issues. Jumping back up to your second question, things I learned from researching carousel horses would include the fact that a rather large number of the best known carousel carvers were Jewish immigrants.  As something I didn’t know when I began, I think Sam and Morris found their way into the book as a nod to that history and without question, became an integral part of the story – such that I can’t imagine how this would have succeeded without them.

ALTP:  Do you think there is a message in The Carousel? Or several messages? If so, what?

SD: I think there are several messages, but none more important than the grace of friendship.

ALTP:  What a wonderful exploration of ‘community,’ of what brings people together and what keeps them apart! What do you think is the central factor (within the general merry-go-round lady and the horses themselves) that pulls this community together?

SD: I think it’s everyone’s unique need for a hand – different people at very different life stages, but all finding a helping hand through the carousel project. Isolation often happens to us all—the routine of life can become isolating—whether we know it or not.  I think this is a moment wherein people were simply drawn in and in spite of themselves reached out, or let others reach in because one woman had a vision and needed help.  The wonderful part is no one knew what they would gain.

SD: As a fiction writer, the years spent producing help me understand and—even occasionally, graciously—accept the notes that editors (and friends and family and anyone else brave enough to read a first draft) give you.  I understand that portion of the process, the collaboration, and what a gift it can be. On the flip side, being a writer allows my executive producers to know that I respect their work, and to know that my suggestions are not about economics over creativity but rather striving for balance.

ALTP:   What one bit of advice might you give a new writer trying to “get out there”?

SD: Take the notes. If someone gives you their time and reads your work and has suggestions, go through each and every suggestion to determine if there are ways that suggestion might improve a paragraph or a chapter or the premise. Evaluate them honestly and be prepared to revise.

ALTP:  Anything you might want to say—about anything—that you think might interest readers or give them a better idea of who you are and what your book is all about?

SD: I have tried to write a book about simple truths, simple moments; at its core, it is a story about how much better life can be for making one change.  I’m really blessed—even though my personal story is nothing like the story in the book, I can say art imitated life.  Like the carousel lady, I made one change, moved to a new place—Rehoboth Beach, Delaware—and found an amazing community of friends from this journey.  Having my book published is another change and another journey, and I hope your readers will share this new chapter with me.  Thank you so much for asking.