Matt Smith in ‘Christopher & His Kind’

Matt Smith in ‘Christopher & His Kind’

27-year-old Matt Smith, best known to spec fans as Dr. Who, will play Christopher Isherwood in a new BBC biopic based on the author’s autobiographical book Christopher and His Kind. The made-for-TV pic will air in the BBC-2’s Fall 2010 schedule and that’s about all we know so far. One interesting fact: Director Geoffrey Sax also directed the film adaptation of Sarah Waters‘ Tipping the Velvet. Earlier this year, Colin Firth was nominated for an Academy Award for his starring role in another Isherwood adaptation, A Single Man. Steven Rydman wrote about the film in February. Watch the trailer for Christopher & His Kind and read the synopsis after the jump. 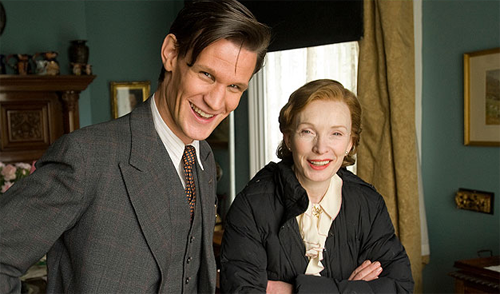 Christopher Isherwood escapes repressive English society and his suffocating relationship with his mother, Kathleen (played by Lindsay Duncan), for the decadent – and politically unstable – world of Thirties Berlin. Jean Ross (played by Imogen Poots), is an aspiring actress and singer who provided Christopher with the inspiration for the Sally Bowles character of Cabaret fame.

Gerald Hamilton (played by Toby Jones), is a peculiar man who provided the inspiration for the title character in the celebrated Isherwood novel Mr Norris Changes Trains. Wystan Auden (played by Pip Carter), is the famous poet with a droll sense of humour who persuaded Christopher to join him in Berlin. Heinz (played by Douglas Booth), is an unassuming street cleaner who Christopher meets and falls in love with during his time in Berlin.

The hedonistic Berlin cabaret scene is in full swing when a young and wide-eyed Christopher Isherwood arrives in the city, unable to speak a word of German, to stay with his close friend, Auden.

To Isherwood’s reserved English sensibility, the city’s thriving gay subculture is thrilling and intoxicating. But Christopher soon finds himself heartbroken after the failure of a hopeless love affair, and so sets out on a process of self-discovery. Christopher And His Kind is written by acclaimed playwright Kevin Elyot.